It's time to introduce our newest series here at S'C'&C - "Coney's Across America" where we stop in at long time Coney Dog shops located throughout our great country. I took a summer trip up to Lake Superior this past summer and spent some time in Duluth, MN. You can expect plenty more from this trip as the days go by but for now we focus on the Coney dog shops. We stayed in Duluth two nights and breakfast one of those mornings for me was at both the towns local Coney stops not too far from each other. I spied one called The Original Coney Island walking to the casino which is right by it and another one a block up not too far from the first one called Deluxe Coney Island. What is it about Coney shops in great Lake cities/towns? seems like every one's got them and they've all been around for a while. We will get to the history of these old time shops as the series goes on but in case you were wondering, they did not originate on Coney Island. Nope, they are usually owned by Greek men who came over to the country thru Coney Island, and the orignal hot dog shop was called Coney Island and the rest hopped on with it. Like I was saying, Duluth has two so I had to check out the both of them.
________________________________________ 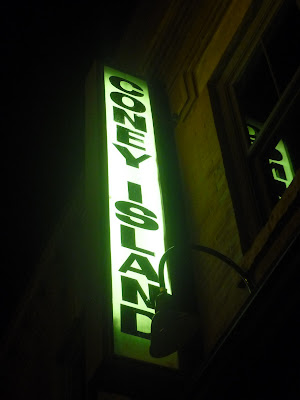 The first one is "Original Coney Island Diner" which has been around since 1921. One of the draws for me into these places is their old time feel. I don't think many people are opening up Coney shops anymore so most of them in and around the country have been a part of their community for some time. They are places that open early and will usually have cafeteria seating and a bunch of old time locals sitting around chatting and what not. No matter which one your at, you will always see the dogs sitting on a griddle rotating away in the front window. I consider these shops to be historic and hope they all stay open a long time. Another thing I love about them is they usually have neon since they've been around forever. I'm a sucker for old neon signs. It's not just neon as most also have old signs from the 50's. 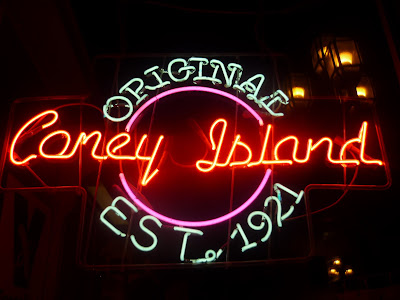 a popular stop in Duluth, MN

So the story for this one goes "On April 10th, 1921 Gus Saites, a Greek immigrant, had a few hundred dollars and an idea. He would open a restaurant on East Superior Street in his bustling hometown of Duluth Minnesota. Nearly 90 years later this idea continues uninterrupted in the same location and under the same tin ceiling as on that spring day in '21. For almost 40 years Saites served up personal service and great food." 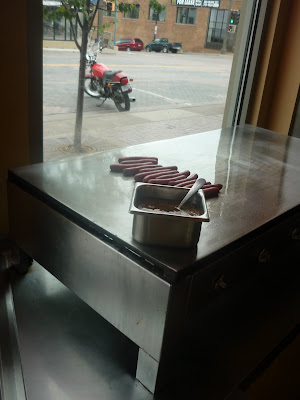 Hot Dogs in the window ready for consumption

"In 1932 Gus would take on a cook named James Pappas, James was also a Greek immigrant who would make a name for himself in the local candy business and in a twist of fate, would have two great grandsons acquire the restaurant 76 years later. In the late 50's the business was passed on to Gus' nephew Tony. Tony Pagonis was a fixture on Superior Street for the next 30 years, offering up a distinctive personal service that long time patrons continue to recall today. Notable customers of Tony's included Liberace and a campaigning John F. Kennedy. In the 1970's Tony would serve up over 600 coneys a day, seven days a week! Tony's brother Gus would join him during this time and together they would operate the restaurant into the late 1980's." Not a thing has changed to this day and the Original was the first of the two I hit up. It was around 9a and they were open and serving breakfast but I was there for a Coney. There was a crowd eating breakfast and the service was anything but good and it took about 15 minutes for what should of took five. I eventually got my Coney with everything and cheese. The Original uses Vienna beef hot dogs and that was what made them the winner of the two. But the cheese was shredded which is ok but didn't melt very well. 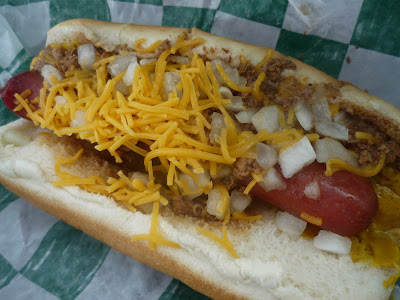 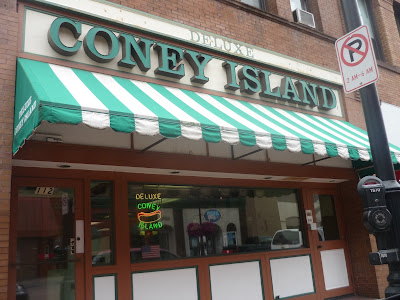 Another popular stop in Duluth, MN

Located not too far from the Original is the Deluxe. It's also downtown and opens very early for the locals. They have no website but according to the papers they opened up shop in 1961. So this is relatively new as far as Coney shops are concerned. As is the case with people from Duluth you go to one or the other. Inside the Deluxe was an old time interior with an old guy running the show. On my visit that morning he was getting the sauce ready to go and had the hot dogs rotating away for the days customers. 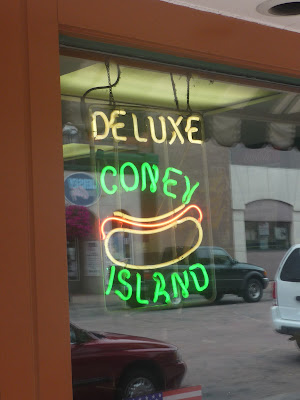 The Deluxe used a child's play hot dog and while their cheese was melted (they put it under the sauce) the dog is what I tasted most. However the dogs like these are a part of Coney dogs and some people don't want their Coney's with anything but cheap plump dogs. I liked both spots Coney sauces but neither was my favorite Coney ever. The Vienna Beef dog made a difference though for the better but would happily stop in again at either or for a dog or two. 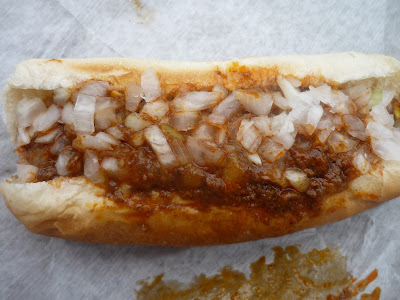