As much as I love the summer, I am a big fan of the fall. It's the time when the Midwest is at its most scenic with the changing of colors in the plants and trees and the crisp air is refreshing and it becomes a great time to take a cruise and take in the views. A great place to do this is Amish Country in Northern Indiana. Located in Elkhart county it's about 130 miles east of Chicago and a great place to spend the day or the weekend. There is no doubt that its prime time is in the fall when the apples are fresh, the pie is abundant and people are taking in the sites and views of The Heritage Trail. It's a 90 mile ride that takes you on a winding loop thru the various towns of Amish country and the region. In seeing places like Middlebury, Goshen, Shipshewana and Elkhart you will be taken along rural highways, scenic byways, have to yield to the horse buggy's still used by the local Amish communities and ride down small town Main streets and get a feel for what life used to be like. They're still living in a past part of time here and it's a great experience to get a feel for and see the way of life in these parts. Check the website HERE for info on the trail. It was selected among the "100 places to see in your lifetime" by Life Magazine. 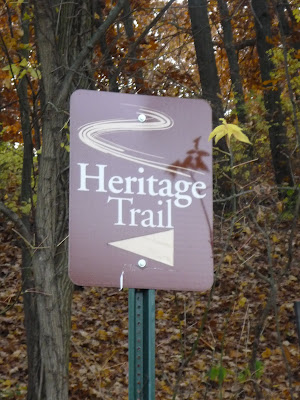 A beautiful drive especially in the fall 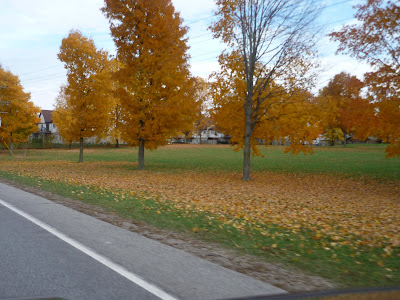 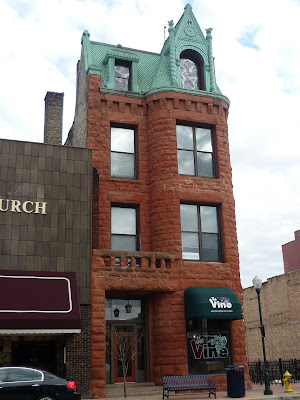 Historic building along Main st. in Elkhart, IN 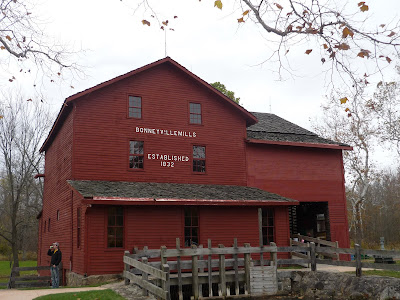 You'll see many buildings, houses and farms from way back when 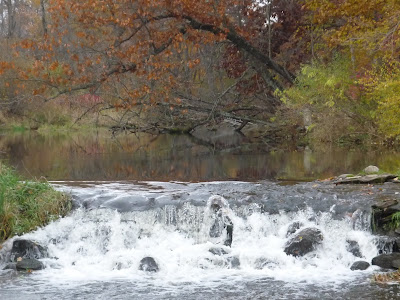 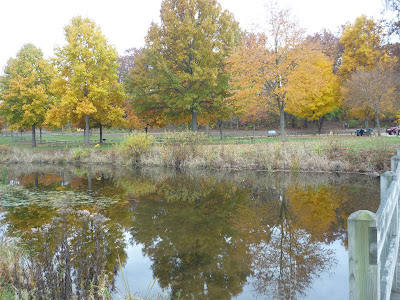 Of course your going to get hungry taking in the views, and it wouldn't be a great ride unless there were some great food stops along it so you know there are. When I did this trip last fall we hadn't really planned to do the trail so we didn't start it until later in the afternoon and by the time we were getting done the sun was setting. So we didn't have the option to stop at a bunch of places and decided to eat when we were finishing up the drive. That came around Middlebury which is home to one of the areas more popular attractions the Das Dutchman Essenhaus. Seen below it is a huge piece of property with a restaurant and buffet (pictured) which extends into a large giftshop and bakery. They offer many food options to take home including pies and a huge amount of homemade products like apple butter and pickled veggies which are made on site in the wholesale food facility and sold on the premises and shipped around the country. About 3/4 of a million people visit each year and there is an Inn with a conference center and other non food related shopping options in the village. 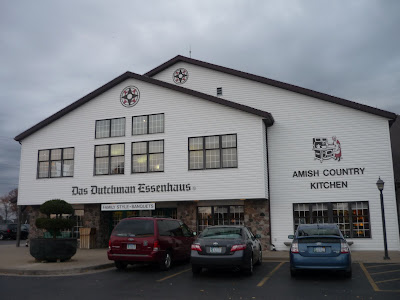 A tourists favorite in Middlebury, IN

The size of the restaurant/bakery/giftshop is unexpected and thus huge. The restaurant offers family style dining and includes a buffet and a takeout menu and can seat more than most. The menu of the buffet on the night we visited was tempting but we didn't have the time to dine in and ordered a few menu items some to consume quickly before we hit the road along with some other stuff to take home and eat later that night and the next day. I enjoyed the stuff I got and while it wasn't blow your taste buds to new proportions good, it was very comfortable. Just some good home cooking like they do in households around Amish Country. Here's a look at what I got and what I thought. 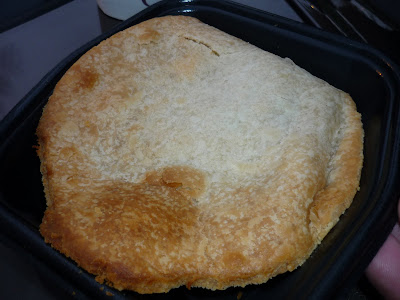 ^Classic comfort food it was perfect for the night we were there. It was the end of October and the cold was coming in and you could feel it in the air and the pot pie did the trick. Not the best one ever, it was filled with a minimal variety of ingredients but those were the right ones. Lots of chicken and a real nice gravy inside the pie were its strong points. 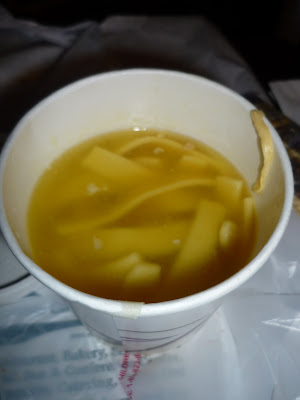 ^Everything I said about the pot pie holds the same for the soup. Lots of chicken and noodles in a real clear tasting chicken broth. Nice stuff on a crisp cool fall evening. 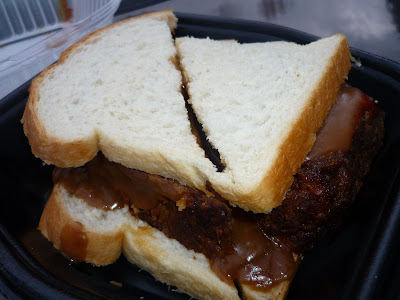 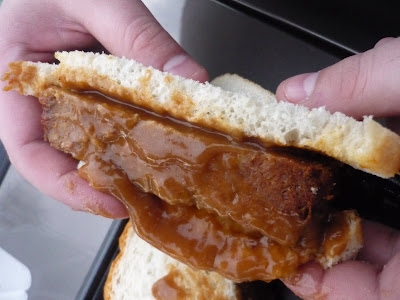 Its a case where simple works great

^The meatloaf is said to be one of the more ordered menu items and is made fresh daily the same way the recipe was made by the owners mother. Since I was going to be ordering some other things that caught my eye to take home, I thought the meatloaf sandwich would the perfect thing to get before I took the drive back. It's offered with toppings of choice but I went with just the sauce. Very comforting it took me back to my youth when it was one of my favorite wintertime meals. 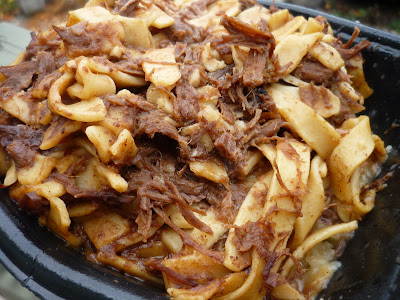 ^This is a dish I have loved since a kid and if I see it at a place like this I'm going to get it. Classic Amish comfort food. It became a no brainer when I asked the waitress what the most popular ordered item was and she told me the beef and noodles. I thought they were really good, great for comfort food. Hidden beneath the pile is a layer of mashed potatoes and gravy. They don't hold back size wise so for $7.99 along with a bunch of rolls it was a great deal. I'll get it again. 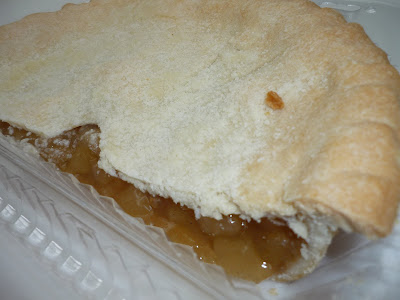 ^The bakery was pretty amazing. They had all sorts of homemade pies and baked goods along with 100's of canned goods made and then jarred on site. Pretty much anything you can think of. I didn't know what to get, I wanted it all. They had every baked good you could want so I settled for the most loved, half an apple pie and a package of dinner rolls I used later in the week. The prices were noticeably cheap compared to most places like this I have been. The pie was an excellent treat the next day and I cant wait to get back.
________________________________________ 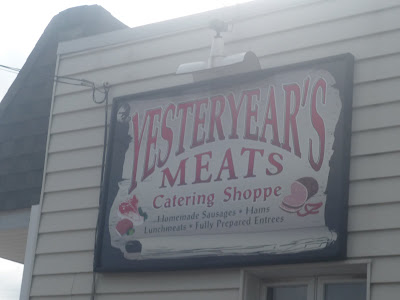 On another trip thru Northern Indiana I found a place that I fell in love with upon my first visit. It was in Demotte, IN and it was an old school butcher shop in the heart of the town. Yestermeat's is what the sign said with "The way it used to be" underneath to let you know how they run their butcher shop business. So I parked the car and went on in to see what was up. 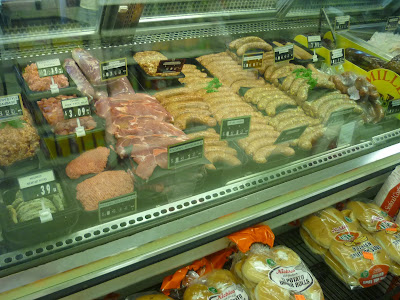 I was very much impressed with this place. In fact its still one of the best butcher shops I have been to anywhere and if this is how it used to be than that's how I want it to be again. The meat display case was filled with everything and it's all fresh and expertly butchered. The beef was ground that morning and I went ahead and got a couple pounds of ground beef and a few pork tenderloin patties. All pork products are locally raised and top notch in quality. 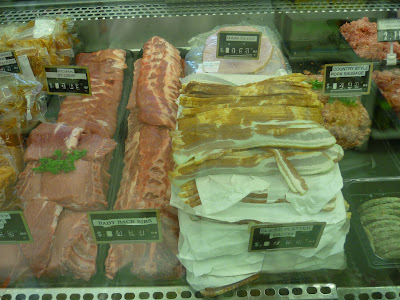 Pork is plenty at Yesteryear 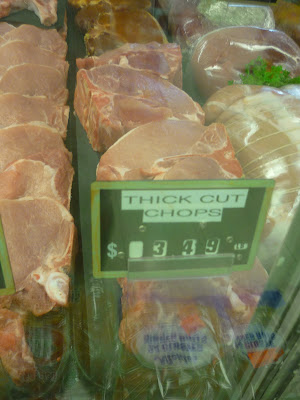 Next time I stop in I will get the chops

Along with their wonderful selection of fresh meats they had other stuff like bread and buns and jarred items like hot peppers and pickles along with most everything else you need to make a complete meal. Despite theirs doors opening in 1992 this place has all the charm of a business that's been around for generations. They run a catering business that specializes in outdoor parties so you know the grilling is good. They will make party trays to your liking and process wild game for all the hunters of the area and make the sausage and jerky on site. 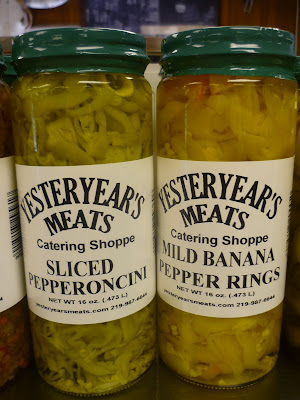 Picked up one of each on my visit

It's not just butchered meats at Yesteryear, there's also plenty of homemade baked goods. You can get fresh bread, cookies, cakes and of course pie. I'm a sucker for any dessert with apples and cream in it and when I saw the fresh made apple slices on the counter I had to have some. 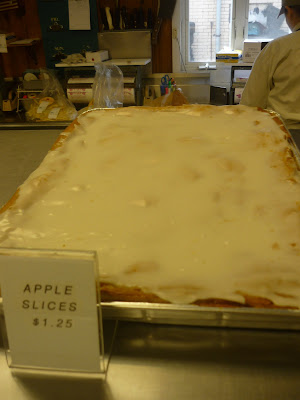 My type of treat

I'm not exactly sure what the history of apple slices are but I'm interested in knowing. I think that these are a dessert of yesteryear. They were fantastic having just come out the oven I ate a piece on site and order three more to take home. I wish we had a place like Yesteryear Meats in my neighborhood. 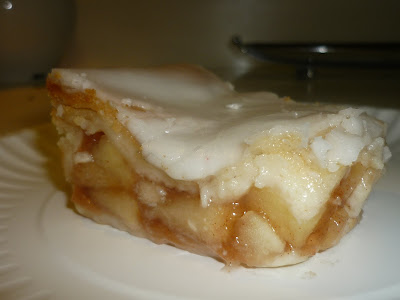