Were going back to the eastside of Chi to the Mexican Inn, a staple of the area, its been at the corner of 95th and Ewing along the Lake Michigan Circle tour route since 1961 and owned by the same family since then too. This is a spot I have been intrigued with since my high school days of going to Michigan City and taking US Route 12/20 and passing by this locals favorite that always caught my eye with its past era looks. A food friend of mine from LTH who knows more about southside Chicago and its food history than everyone else combined said the place is "a culinary museum, dishing up food exactly like they served in the '60s and '70s" and that's exactly how it looks from the outside when cruising by. I cant verify it but I've also heard that this might be Chicago's longest running Mexican restaurant which is impressive since we have as many as anyplace outside Mexico. I stopped in a while back to the triangular building to finally knock this spot off my list and I am glad to bring it back to my readers. 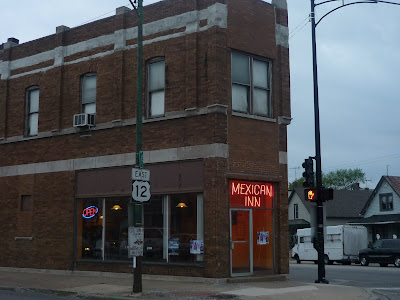 a locals favorite in Hegewisch/Eastside of Chicago

When I stopped in here with another buddy of mine we got the same feeling the outside gives you upon walking inside. It feels like stepping back into time with the classic Tex-Mex cafeteria feeling to it. Its hard to believe that Mexican food didn't really become popular in the US until the 60's and even then the food we called Mexican was more like Tex-Mex and yes there is a difference and both are very good in they're own right. Since then we have seen not just Mexican food like tacos and tortas pop up all over but been lucky enough to have all sorts of selection with different regional variations served at different restaurants throughout Chicagoland. Today however we visit one of Chicago's old school Mexican joints that very much has that Tex-Mex flare in both the menu and ambiance. You wont find anything you've never seen or eaten before on it's menu but that doesn't mean its not worth a mention. 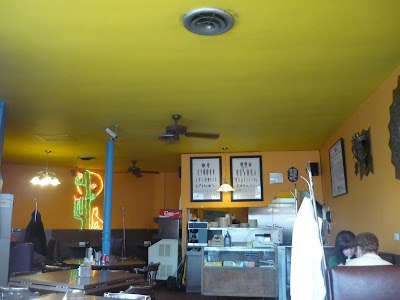 I've mentioned it on here before but I'll say it again in case your not familiar with the neighborhood Mexican In is located in, it is very old school and one of the few neighborhoods in Chicago that feels like not much has changed. This goes for both the houses and businesses as well as other things that make the eastside a place I enjoy going to. We visited the Inn around 430p one evening and when we entered we were the only two people in there under 30. There was nobody in the 31-59 age range and everyone else was over 60 most eating dinner. Like I said about the neighborhood, not much has changed including the people, lots of old timers. Like any good sitdown Mexican joint your a started with chips and salsa on the house as you are given your menus. The salsas arent pictured but were what you would expect them to be like back in the 60's. They are housemade and I enjoyed them and so do regulars who buy containers to go. The menu has expanded over the years but we were there for the Tex-Mex like menu items for the most part and that's what we were going to order. Here is a rundown of our meal, eat by eat. 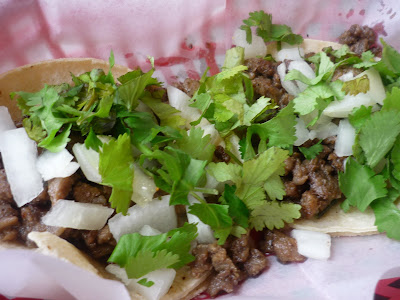 ^We started out by ordering two steak tacos with the traditional condiments of onion and cilantro on its customary corn tortilla just to compare what those were like to other authentic Mexican taquerias around town. While they weren't awful they were nothing special. Steak was made on a griddle as opposed to the favored way of a grill and not something I'd get again. 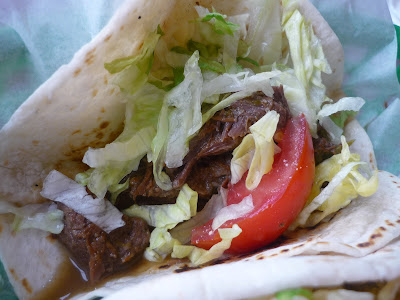 ^I enjoyed these tacos which are regularly made by mothers all throughout Texas and other places where AmeriMex is popular. Pretty typical with its toppings and flavor and served on a flour tortilla which is the more common used tortilla in Tex-Mex recipes. While they weren't order yourself a few more good they were homey and the taste came without the slaving and cooking in the kitchen. 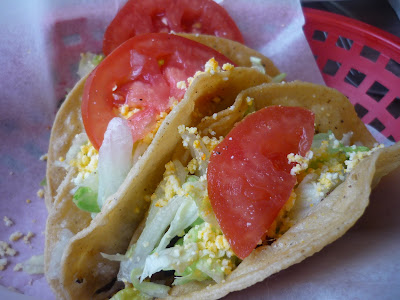 ^My favorite item of the visit. Another Tex-Mex staple you just cant find these many places anymore and the spots that do have them use those awful store bought hard shells and are too lazy to fry them fresh. Sure just like the taco above its a simple recipe and the ground beef could be seasoned up a notch but the combination of the beef with the lettuce, tomato and cheese on a fresh fried hard shell taco does it for me. Yes they're easy to make at home but I would eat these there too just like the locals do if I lived in the area. 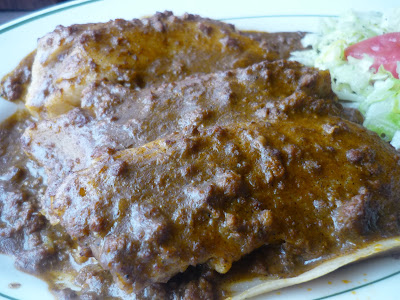 ^Once again we have a menu item that's more Tex-Mex than Mexican. Yes tamales are Mexican and made everywhere in Mexico, these tamales were made like those served at Tex-Mex joints and made with a corn meal batter and had a thin and almost crumbly outer layer. I'm not an exert in real Tex-Mex from Texas but I do make alot of recipes using Robb Walsh's Tex-Mex cookbook which is legit as it gets. I liked these but thought the gravy could have been better. Again it wasn't seasoned enough and blander than I like but also again they weren't bad. 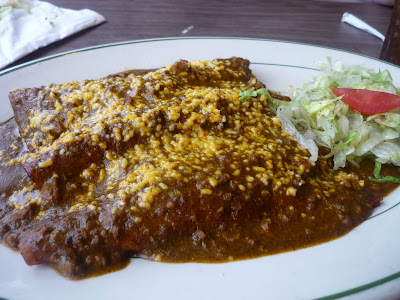 ^Well, well once again we have a popular item in Tex-Mex cuisine. Although enchiladas are eaten in various parts of Mexico the style of Mexican Inn's version was in the style of enchiladas I would put in the Tex-Mex category. The gravy was pretty much the same stuff they used on the tamales so they didn't wow me but they were eaten. 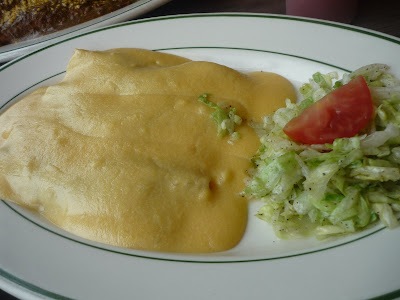 ^I thought these were interesting, I wouldn't have them again but then again I didn't grow up on these since I'm not from the area. The family that owns Mexican Inn is from Mexico but when they opened the restaurant it was these type of dishes Americans recognized as Mexican and were going crazy for so most of these items were on the original menu and are not what most Mexicans eat. As time has gone by and Chicago has seen its Mexican population rise they have been able to add more authentic items they make for family dinners to the menu but have kept the original ones and the original customers have kept coming back. The family travels back to Mexico each year so the place is closed from January thru March. I love it for its character as much as anything. There arent many places like this that have survived time. If you ever drive by the triangular building and see the "Mexican Inn" neon, stop in for a hard shell taco or two. 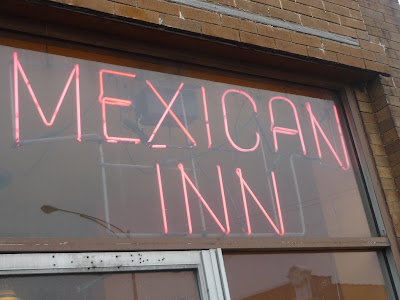 This is such a beautiful post, and Congratulations, your work in photography is stunning and very inspiring

Hi there! this is such an informative post. Thank you for sharing. Cheers!

Breakfast and Coffee in mission Cafe Taboo Wide variety of foods that are a bit expensive, but definitely tasty. Breakfast bagels and croissants are a must before work at any of the surrounding buildings.

Fuck you. This about Chicago food, chingona.