Its been a while since we had breakfast here at S'C'&C but with the colder months ahead I thought I'd share one of my favorite spots for it. Its the perfect example of the "don't judge a book by its cover" saying because from the outside it looks like nothing much, nor does it look like much inside, but its whats going on in the kitchen space over at Patty's Diner that makes it so special. Run by Patty and her sisters they are the tag team of breakfast champions. They might not always have a smile on their face (although service is always great) but they always cook with love and passion. Its not just no frills in looks and service but its also got the goin' on's of a classic American diner with its menu options and hours of operation which are for breakfast and lunch only. It's located in the Chicago suburb of Skokie. So many people just cruise on by and have no idea what they're missing out on but those in the know are all regulars. 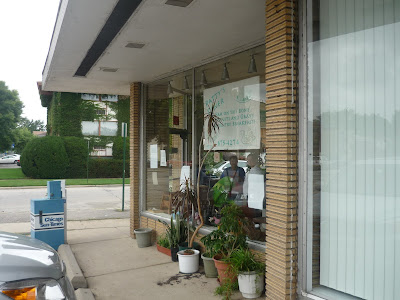 a locals favorite in Skokie, IL

Patty is the woman behind the madness and does practically all of the cooking by herself. Its all in the family as her sisters wait tables and take care of the other needs around the restaurant. I call it madness because on a busy day you will walk in and choose to sit at the tables on one side or up at the bar on the other. I love sitting at the bar and watching Patty take to task order after order and not miss a beat. It looks like shes just running back and forth like a kid with ADD on Kool Aid but that's not the case, shes cooking her tail off to make sure you've had at least one amazing meal to chow down on the day you visit her. 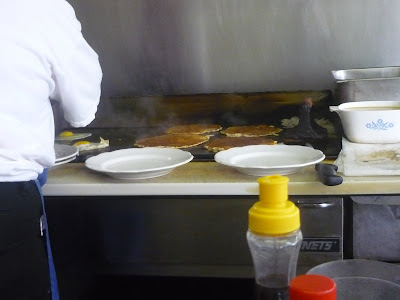 There's always something good cooking over at Patty's

The menu at Patty's place is classic American diner fare. The stuff that used to be served everywhere way back in the day. I'm talking about all the breakfast regulars like pancakes along with eggs & bacon, corned beef hash that is made to order, creamed turkey with real mashed potatoes, hand-patted burgers. I'm talking the whole nine yards. In fact I can promise you will be seeing Patty's again here on chibbqking and that's because I love going there but I cant refrain from ordering the same item each and every time. There's only been a couple times when I didn't make the same order as I always do. If you see something on the menu that you are a big fan of, get it! It will be good. I've never heard feedback of the bad kind about Patty's Diner. 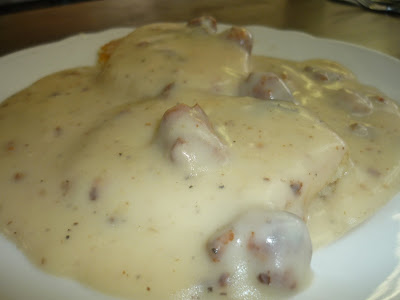 Well when I was saying they take no shortcuts there I meant it in every sense. Too many places nowadays surpass doing it like they used to for quicker and cheaper ways of doing so. In the case of ham this practice is way too common. Barely any spots use real ham off the bone anymore when making dishes involving the southern favorite. If you sit at the stools while dining in you'll notice a big old hunk of ham to your left near the back which is the basis for any dish I order at Patty's. Ham is just one of those things that you gotta have the real way aka no cut up deli meats or anything pre-diced and lacking the deep in depth flavor real ham off the bone can have. If your a fan of ham then you really wanna check out Patty's and order one of her dishes that includes it. 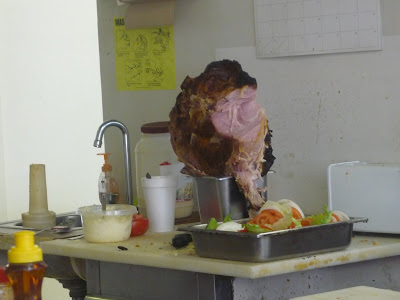 Ham on the bone ready for cutting when needed

I'm not a big time breakfast eater but I do enjoy it when I get a chance to eat at a place like Patty's. I like a breakfast sandwich no matter what time of the day it is and just in case you didn't know, it is Patty's where you can find the best sandwich of this kind. I've had many breakfast sammy's during my days and none can come close to what Patty brings when the craving for a meat of choice, egg and cheese sandwich comes a calling. I have to have me a ham, egg and cheese pretty much every visit I make. They are that good. Its starts with the ham sliced fresh off the bone and crisped to perfect perfection and then they put an egg cooked to your desired doneness and melt some cheese and stuff it inside a glorious homemade bun that makes this sandwich one of the absolute best of any kind in Chicago and one of my all time favorites. Go check Patty and her sisters out and you'll become a regular in no time. 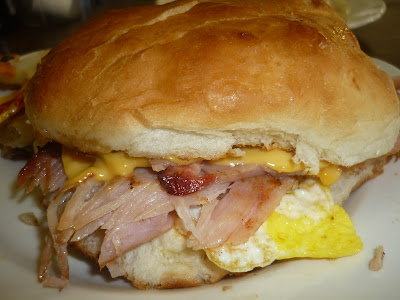 Ham, egg and cheese sandwich served on a heavenly bun...I'm drooling as I type this

Is there anywhere you have not been?

You should know that Patty's closed on December 31 2010... It may not be over for her. she may open elsewhere in the future... but meanwhile, she is already missed by many.

Has Patty reopened else where? Love her cooking and miss it so much. We would travel from McHenry to Skokie just to have breakfast. Living back in the area, I'd love to know if she's opened somewhere else.

I've got a very interesting article to share with you today. It?s from my good friends and fat loss cooking experts Dave and Karine from MetabolicCooking.

In this article, you will learn:

1. Why most "healthy" cookbooks use ingredients that actually make you fat.

2. How to ensure your meals are optimized for fat loss!

3. What to do so your meal plan doesn't hit a fat loss plateau.

I'm telling you, this is GOLD!

Is your food making you FAT or burn MORE fat? (article) By Karine Losier & Dave Ruel

If you've tried fat loss diets before and have used a variety of weight loss cookbooks to try to lose body fat, then you very likely know by now that those fat loss diets and the "healthy" cookbooks that go with them don't work.

What is it about them that makes successful weight loss so difficult to achieve?

Well for starters, most "healthy" cookbooks are NOT designed with high Metabolic Thermo Charge ingredients. They are not using the metabolic powers that certain foods have to make your body burn more body fat. Instead, they use ingredients with very low thermogenic effect.

Why does this matter? Because the Metabolic Thermo Charge of food stands for how many calories your body will burn just by breaking down the nutrients each time you consume a certain food.

Most people have absolutely no idea of the power some of these foods have over the fat burning processes that go on inside the body, and so they never really think twice about them. BIG MISTAKE.

For example, simply consuming high-quality protein with most meals will naturally burn off more calories and move you closer to your target weight. Lean protein has a very high "Metabolic Thermo Charge". Spices also have a strong thermogenic effect on your body. Combining certain foods together, such as chicken and turmeric, with help you burn more fat after you eat it.

But that's not all. Another thing to consider is whether or not your so-called ?healthy? cookbook has a real structure. Too often, cookbooks are just a bunch of recipes thrown together at random ? you pick and choose what you feel like eating at that point in the day. That is NOT going to make you burn fat faster!

Having a structure is mandatory if you want to rid yourself of stubborn fat. That's why we developed a quick and easy "Metabolic Nutri-Profile" system for all our recipes, so you can see precisely what nutrients you're taking in, which ensures that each meal makes the most of your metabolic rate.

Don't make the mistake of venturing into the food jungle without your compass!

So we?ve talked about the food and the structure of your eating plan. Sounds like we?ve got it covered, right? NO!

Ever followed a diet to a ?T? and all of a sudden noticed that you stopped losing fat?

This is called the Metabolic Adaptation Phenomenon. It occurs at that point in your diet when your body knows precisely what it's getting in terms of food and has fully adapted to it. When it reaches this state, your metabolism slows down and fat loss screeches to a halt.

In order to avoid the Metabolic Adaptation Phenomenon, you have to vary your nutrient intake regularly, shocking your body as time goes on. This keeps it guessing and ensures your metabolism stays on high at all times. Having a wide range of fat loss recipes at your fingertips makes avoiding this frustrating condition a breeze!

Now you know the REAL score when it comes to fat loss and dieting! Be sure to watch out for these three sneaky saboteurs next time you make the decision to lose fat!

If you struggle with food or nutrition, Metabolic Cooking is your knight in shining armour.

Talk to you soon!