School is back in session around Chicago college campuses and with it comes hungry students and an increase in business for their neighborhood eateries. It was a year or two back when Lincoln Park saw three different hot dog stands pop up outta nowhere. I've been to all of them a few times now and am going to feature Chicago's Dog House in today's Hot dog Stand tour. Its on Fullerton right across from Depaul University at the Lincoln, Halsted and Fullerton intersection. In a little over a year they have developed quite a fanbase of which includes myself. 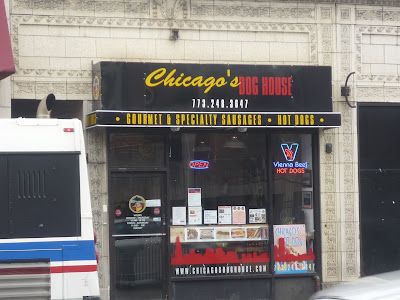 In the heart of Lincoln Park/Depaul

The Dog House was started by a a few friends from the neighborhood who wanted to bring the Depaul students as well as neighborhood residents a hot dog stand for when the cravings for 'em came. The duo decided to hell with the desk life when they graduated college and came up with Chicago's Dog House which features a great selection of specialty hot dogs, Chicago style, Polish sausage as well as different gourmet sausages and a few sandwiches and burgers. Inside this place is your average Chicago Hot Dog Stand taken up another notch. Its got some funk to it and fits in well with the college feel of the area. There are a few tables as well as some stools along the window for people to dine in and take out is popular and a quick quality option if in the area. 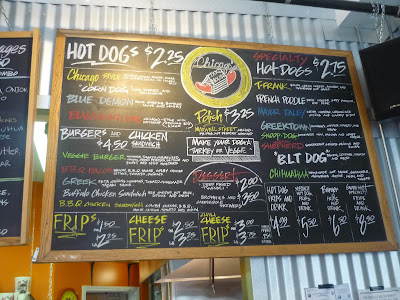 The menu for Hot Dogs and Sandwiches 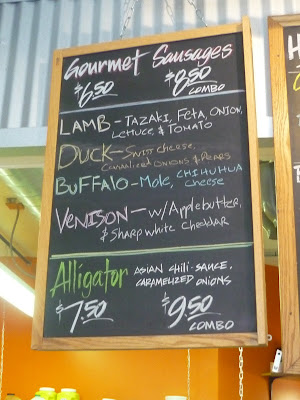 Gourmet sausages are ordered from local butchers and can switch

I've been to the Dog House countless times since it opened and when I didn't have a car for a few months it really satisfied my chow cravings. So I've been going here for a while now and have come to try many different items but am still working my way thru the entire menu. The first thing I had to try from here was going to be the "Chicago style" dog and of course that would be with fries. I think this was a good way to see whats up with the place and what they were offering. Chicago's uses Vienna Beef hot dogs and they grill them before topping them with your standard Chicago style toppings. I was quite impressed with theirs because I prefer my dog grilled when I'm getting it Chicago style with the whole nine yards of tomato's, pickles, peppers etc...I've had quite a few Chicago styles since but am always trying to explore the menu. One dog I wont be trying is the Blagojevich which comes with ketchup (opening bid is a $1000). Notice the chip's? or as they're called at Chicago's Dog House, frips. 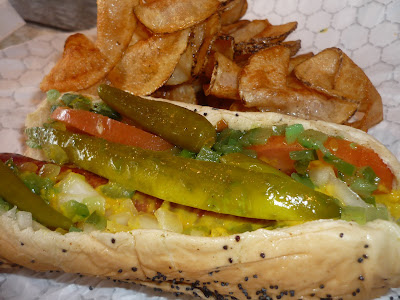 You ever order those fresh made chips at your local state fair or carnival? You know the ones where they take a potato and put it thru a drill and it comes out as one big piece which is then throw into a deep fryer and cooked for a couple minutes then served to you? Basically fresh as it gets potato chips so they have a fry like taste to them hence the name frips. Well that's what they got instead of fries and I think that's pretty damn cool and creative. You can watch them drill the potato and throw it in the fryer just like at the state fair and they're also pretty damn good and helluvaddicting. 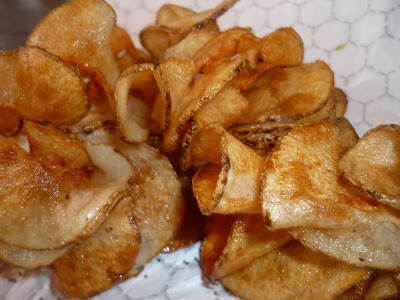 Frips are a cross between fries and chips

You'll see on the menu pictured up above their are a selection of specialty hot dogs which are grilled Vienna Beef wieners topped with non traditional Chicago style condiments. I've been thru a good portion of them and have a few that I have gotten on multiple visits. One of those is the Snoop Dog which comes with chili, cheese and onions and is a fine example of a chili cheese dog and the grilled wiener goes great with them. Another standout is their corn dog which is freshly battered. I also like the Mayor Daley which can be seen below. Let me take you thru a few that I have tried and recommend that you get over there and do the same. Its a nice addition to the old neighborhood and a worthy late nite option on weekends if drinking in the area. 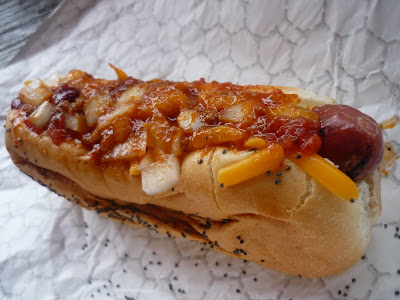 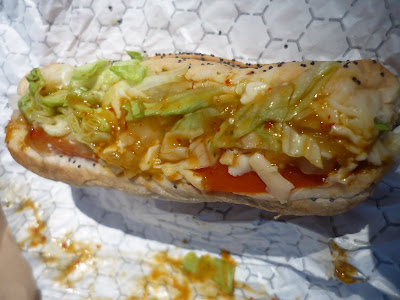 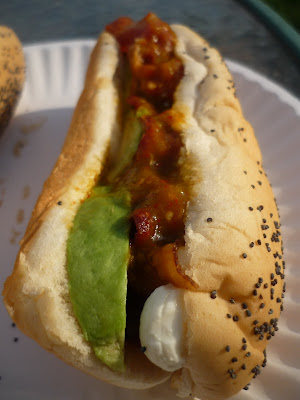 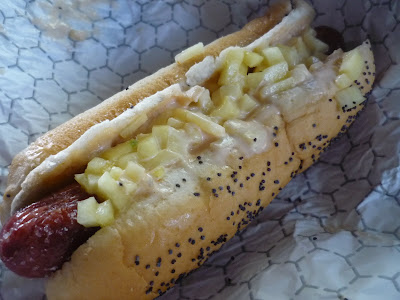 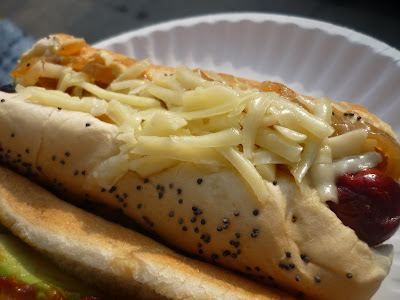 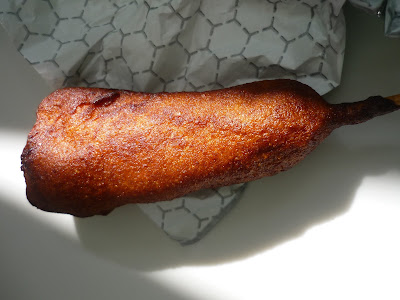 I love Chicago style dogs, but it is surprising how often they are mediocre. And all of the fancy schmanzy dogs--alligator, bison, rattlesnake, etc.--are just a distraction compared to a great Chicago style. I haven't tried the place you posted about here (I will, in time). But to me, hands down, the very best place for an overall experience eating a Chicago dog with fries is Depot Dogs on route 20 in Portage Indiana (actually outside Miller Beach). The dogs are always perfect, good fries and the setting is paradoxically (given the run down economy of the area) one of the lovliest imaginable. Only open Spring through early Fall; always a real treat--especially on a beautiful fall day.