Most everyone already knows that the Chicagoland area is now the home to a Chick fil A. The first store to open in the area is in Aurora with another opening in Orland Park next month and then the city gets its first in the fall of 2011 when a location open in Lincoln Park. It's said the company is scouting a third location along Michigan ave or in the Water Tower and they will hope to have a dozen in the area within the next five years. Until the opening of these recent ones the closest locations were in Racine, WI and South Bend, IN. To give you an idea of peoples passion for Chick fil A you can click HERE and check out video of people camping out at the Aurora location so they can have free chicken sandwiches for a year (a promotion they run). 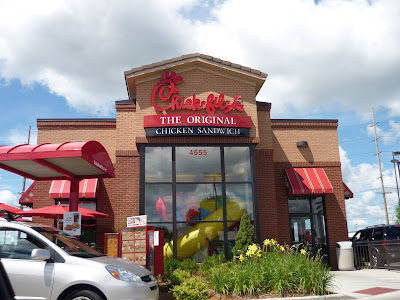 Location in South Bend, IN

Birthplace: Atlanta, GA
Type: Private
Founded in: First Chick fil A opened in 1967
How Many Today: Over 800 units
Locations in: Most American states
Menu item that made them: The Chicken Sandwich
My personal take: If you get to an actual store (not a unit at the mall, hospital, food court etc..) the chicken sandwiches are great and the chicken biscuits served in the morning are my favorite fast food item.

Click HERE to find out (their site wouldn't let me copy it).

I've been waiting for Chick Fil A to make its way around my parts for a while now. Even though I am a little freaked out by their religious obsession I cant say their chicken sandwiches arent great fast food. They have the right model in that they pick something (chicken) and they do it well. No burgers or non chicken choices on the menu. They have a chicken sandwich and it comes on a biscuit in the morning and a bun in the afternoon. You can get a few other choices in chicken form which include chargrilled sandwiches and salads and wraps, strips and nuggets which are all made fresh. The iced tea is also brewed fresh daily and really refreshing and when the peach shakes are on the menu they are must get, one of the best shakes from anywhere. 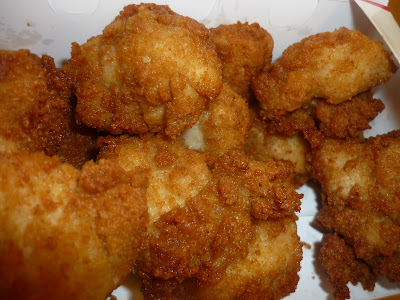 Chicken nuggets are the best in fast food

If I'm traveling a major interstate or I'm stuck in chainland USA I have no problem taking my ass to Chick fil A. I think that their original chicken sandwich (with mayo and pickles) is better than most fried chicken sandwiches I have had. The fries are waffle style and nothing special in my book but people love them. They also offer it served deluxe with lettuce and tomato which I tried once (when I took these pics) and never again. You gotta get it traditional and its my observation that the full restaurants/drive thru's like the one seen above are better than the units in mall food courts and places like that. One reason is they serve breakfast at the big locations and not at all of the smaller units. The chicken biscuit available in the morning is my favorite fast food item and something I want regularly. Its just awesome and I haven't found anything like it anywhere else. I'm not a big fast food eater but I stop when I see a Chick fil A. 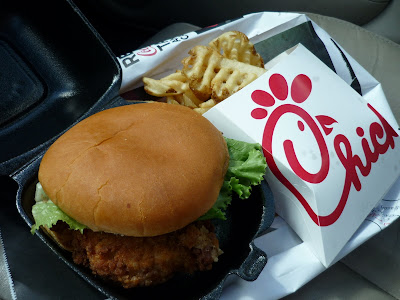 Chick fil A deluxe chicken sandwich (get it traditional, better than deluxe)

Click HERE for IL locations.
Posted by KingT at 4:20 PM

Nice post! I'm happy to see you guys finally got a Chick-fil-A. Around here in Texas they are a staple. You're telling the truth when you say they have good chicken sandwiches. I usually get 2 when I go because they are really affordable and so good. You have to check out the nutrition facts too. Only 15 or 16 grams of fat per sandwich. Also, the calorie is pretty low. All in all, it's a pretty healthy fried chicken sandwich because of the oil they use to fry it, kind of a contradiction for fast food. Enjoy! Also, love your blog. I'm a long time fan! Peace! Matt from employedmadness.blogspot.com