It's time for one of them epic posts, you know the ones that after reading your starving thinking about how good I eat this city and it's top food stops up, wouldn't you agree? Let's get at it. If you saw the Chicago episode of the recently new show on Food network called Meat & Potatoes then you saw today's place which is one of my favorite stops in the city. In fact I was at Sun Wah BBQ the day they were filming the segment on it for food network. Except this wasn't my first time like it was the hosts and his crew, this was an uncountable visit. Those of us that have been going to Sun Wah for a while now remember when it was back in its little spot around the corner on Argyle right off the train line. With its booming success and popularity they have since moved into a bigger building around the corner on Broadway. They now have more room for both the kitchen/butcher area as well as people dining. 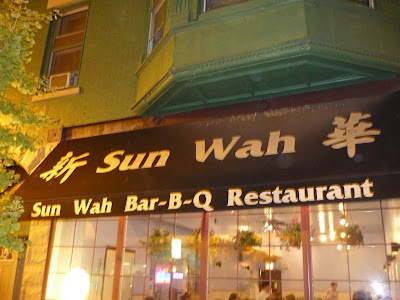 a city wide favorite along Broadway in Uptown

Sun Wah is one of the best family owned and run restaurants in the city with the entire fam being involved in one way or another and always making sure service is smooth, the food is good and your dining experience enjoyable. It's impossible to pass by when you get a view of the Chinese bbq from outside, it attracts me in every time. 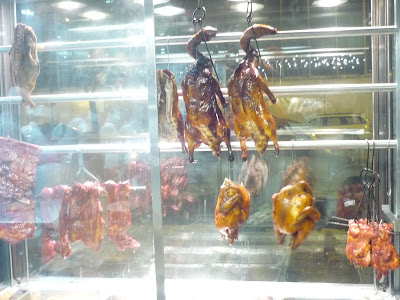 Chinese bbq in the window

It was possible to keep on pushing this post back since there are so many good options to eat at Sun Wah. The menu has 200+ Cantonese and Hong Kong style dishes and noodles and wontons are made in house. I could go there ten more times and keep getting different items off their menu and always be satisfied. I do have a few things that I order on different occasions or if I feel like feastin', then all in one order. Two things that remain a constant in every visit I make to Sun Wah are the hot pepper soy sauce (ask for it at the table or when picking up an order to go) Its just soy sauce infused with sliced super hot peppers and is not for the faint of spice. The stuff is legitimately spicy and will have you sweating if you use too much. I love a little mixed in with almost anything I'm eating from there. 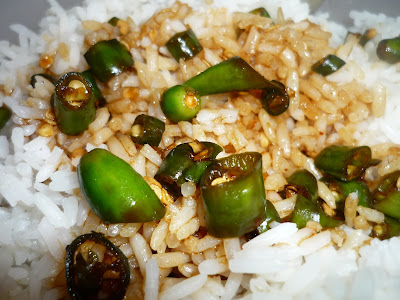 The other constant is an order of bbq pork fried rice. As you'll see as you read on the bbq pork at Sun Wah is stellar and they always do up a perfect batch of fried rice. I would recommend getting to Sun Wah with a group so you can try a few different things off the menu. However if you go solo they have stuff for you too at a really great price. Even if I'm solo and picking up just for myself I get a fried rice to have in the fridge for the next day. Some of the best fried rice in the city. I know it doesn't take much to make a good fried rice but so many places screw it up, not Sun Wah. 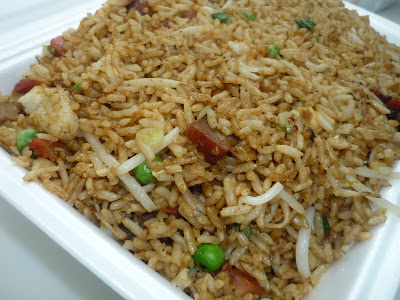 Then there's the beef chow fun. While this dish might not the most adventurous eat on the menu, it's without a doubt one of my favorites. I'm a sucker for a good beef chow fun and Sun Wah's is the best in Chicago. In order for a chow fun to be superb it need a few things and Sun Wah achieves all three with theirs. The noodles are cooked up perfectly in an extra hot wok and the veggies are always fresh. So check and check. Lastly is the beef, so many places have awful beef in their beef dishes and in alot of cases you might wonder if it even is that. At Sun Wah they got it figured out and the beef is always tender with little fat and never chewy. I give them a ton of credit for this because at too many places it isn't like this at all. I eat it up every time. 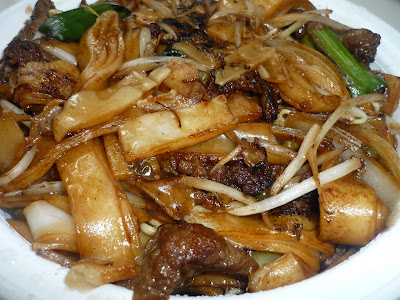 Even though I did say that Sun Wah is great for a group, its just as good for a solo diner. They have the best lunch plates in the city and this is for both price and taste. They take their famous Chinese bbq which has options like roast duck, bbq pork, roast pork, soy sauce chicken, and ribs and you choose your choice and then a huge pile of meat goes atop a heaping mound of white rice and it comes with Chinese broccoli and half of a hard boiled egg. These individual lunch plates could feed two in some cases and cost less than $6. They will also let you do a combo if your having trouble choosing your meats. I'm a big fan of the soy sauce chicken. They are marinated boneless chicken thighs that are sliced up after cooking and can be highly addicting. 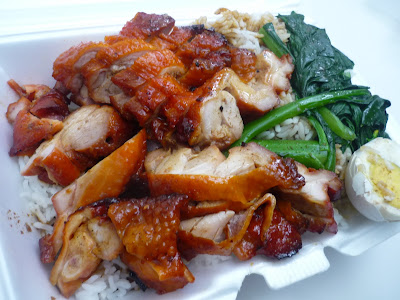 The house bbq is the biggest draw for people into Sun Wah. Some of the items not pictured on here that I love include the salt baked chicken, bbq duck and bbq spare ribs with honey. But the main draw for me is the house pork. Sun Wah is thee Chinese place for all things pig and their Hong Kong style roast pork is from the high heavens. It doesn't matter which way you order it, by the pound, in a lunch plate or in your soup, it will all be good and a big part of that is the pig. I can assure you we will be taking a 2nd look at Sun Wah here on this site in the future. Stay tuned. 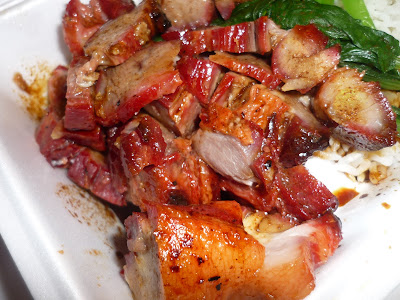 Can I just say how much I love that your blog showcases so much of the off-the-beaten track places in Chicago? Love what you've written about Sun Wah and will put it at the top of my list next time I'm up in the area. Thanks!