When I first rolled up on Senor Pan I was hesitant about trying it out. Located in a strip mall with the looks of a franchise place it didn't appeal to me all that much. But since the Cuban sandwich is my 2nd favorite regional sammy (of course beefs are my first) I gave it a go and pulled into the lot. It's located on Fullerton ave in Logan Square and despite the looks of a franchise fast food place from both outside and in it is not that. This is the only location, maybe they are trying to start a franchise because it looks much more like a fast food joint than a mom and pop shop. It is however a family owned restaurant and they opened in 2007 serving classic Cuban cuisine in a comfortable cafeteria like setting. 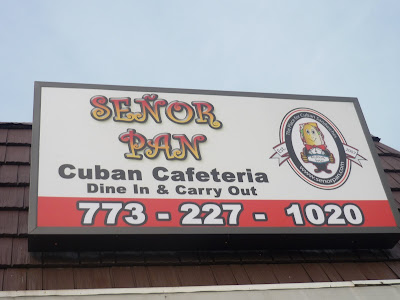 Along Fullerton ave. in Logan Square

Plastered on the windows and walls inside are high quality decals with professionally done photos of menu items and deals on them. I was a little thrown back but at the same time one of the ad's was for their frita cubana sliders and a meal that came with two of them and a couple empanadas at a pretty cheap price. It caught my eye so I ordered that along with my Cuban sandwich. The rest of the menu features popular Cuban breakfast and dinner entrees as well as a list of sandwiches along with soup, salads and of course, coffee. 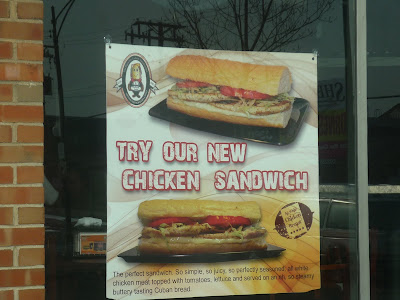 Caught me off guard...

Frita Cubanas are Cuban hamburgers very popular in Miami and something I love to get when I find myself in the 305. Different places takes on them can vary but typically the standard is a patty (sometimes mixed with bread crumbs, eh) that is topped with a spiced mayo/ketchup along and potato sticks and served on a sweet bread roll. Check out a recipe for them I use HERE. I found Senor Pan's burgers to be eh at best. I didn't like the patty and the bun was too sweet. The empanadas were better but not by much. 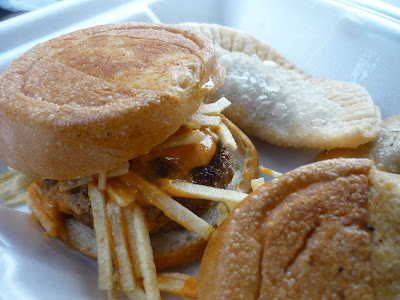 The hamburger meal was cheap and didn't disappoint since I wasn't expecting much but it was different when it came to the Cuban sandwich. I lived in Tampa for a year and during that time fell in love with Cuban sandwiches. It's virtually impossible to find a great one outside south Florida but there are still many places that serve above average version, just like there are many that serve awful styles of them. I am happy to say that Senor Pan was one of the places that serves a very respectable Cuban sandwich. One thing that makes them so hard to find outside South Florida is the bread which cant be found outside there. So the bread on this one was just ok but everything else was nice. Especially the ham. Too many places just use cheap deli sliced ham that they throw on the grill and cook for a couple minutes. The ham from this Cuban might of came off the bone and was the real stuff. The roasted pork was nice as well and they didn't skimp on the pickles. I would for sure stop in again if I find myself driving by and hungry. 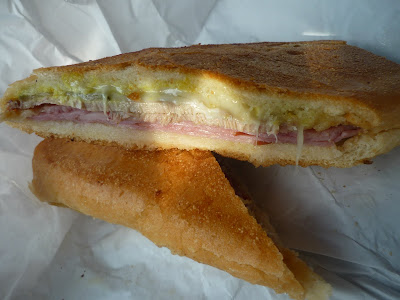