If your daily commute includes a ride down Ashland in between North ave and Fullerton then you've seen and maybe even been to today's place-Choppers. I remember years ago when this place first opened. It now seems to have become a part of the area which has alot of traffic going up and down Ashland. Chicago has long been considered a real blue collar type town so with that we have many eating spots that cater to these city workers and handy men that keep our city running. If you've ever been to Chopper's you've seen the city workers out in full force enjoying a lunch that's for sure to fill them up at a very reasonable price. Almost every time I've ever been here or driven by there's a city owned vehicle or three. 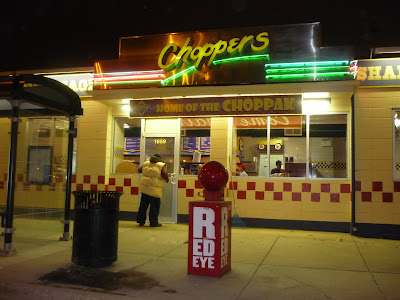 a favorite stop of the City workers along Ashland ave

As you can read in the pic above Chopper's is "Home of the Choppak" which is what most of the city folk stopping in for lunch or dinner are going with and my usual choice on my yearly visit. It consists of a double cheeseburger with your choice of toppings on a sesame seed bun served with steak fries and a large cup of cole slaw. It'll set you back a whopping $4.29 and there's little chance it'll leave you hungry once your finished with it. If you think it's not enough they also have triple's and for those brave enough the Quad. The place isn't far from my house and a nice option to have when I feel like something massive and greasy that's not a long drive and not too much moolah. I don't know how the city workers go back to work (not saying they do...) after eating an entire Choppak. The only thing I've ever done after eating at Choppers was watch TV for a couple hours straight. 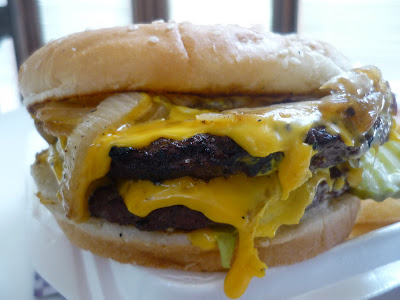 I don't think this isn't going to be the best burger you've ever had, but hey I don't know where you've been and its not a bad burger by any means. It is what it is and what it is is a very satisfying meal when you include price and taste. With a drink it's gotta be cheaper or close to the same cost as a McDonald's or Burger King value meal and it kicks the shit out of either or. I haven't been in months but writing this article here now has me thinking about heading over sometime soon to get my fix. If this is an option for you and you like what I described it as then check out Choppers. Its cheap and satisfying fill you up fast food. They do alot more than burgers and the menu is pretty damn extensive. There was one other time I ordered an all beef steak hoagie off their "specialties" section on the menu and it wasn't bad, again for what it was. 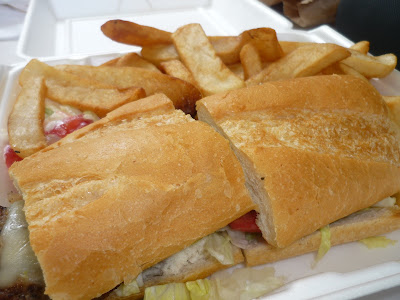 Choppers beef steak hoagie with their steak fries in background

Another blue collar sandwich if I've ever had one. They take a piece of ground beef that's formed into a rectangle like patty and then grill it up the same way they do the burgers except this comes on a hoagie roll. You still have the same options in toppings and one of these with fries and slaw will set you back only $4.75. So you can see why this spot is a real favorite amongst the blue collar employees of Chicago. I liked my hamburger hoagie but think I prefer the double cheese, however both are great grease eats for that killer hangover. I'm sure some people wouldn't even step foot in a spot like this but that's what I'm here for. I cover the entire Chicagoland area and where the locals eat, not just whats new and whats hot in a three/four neighborhood area (albeit this spot is in Bucktown, but not the trendy part). I've done it all and will continue to share. Thanks for reading. See ya next time on S'C'&C with the King. 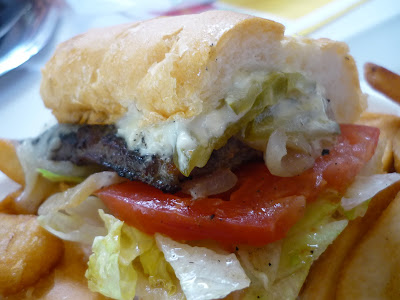 Half of a hamburger hoagie