I recently took a ride to meet a friend and try a self proclaimed "best burger in the world" from Fred's bar in Burlington, Wisconsin. Its about a 75 minute drive from Chicago and not to far from Wilmot ski mountain. Its also known as "Chocolate City" because it is the home to a Nestle factory. Well its not just the home to chocolate treats but also one of the best burgers in the world and the childhood home of NFL superstar Tony Romo as well as River Valley ranch Mushroom Farm and their amazing five cheese garlic spread. Not to jump off topic but that five cheese spread is the best condiment from the state of Wisconsin. So theres alot going on in this little town that resembles most of America and the burger is the star of the show, the Dallas Cowboy's QB and boyfriend of Jessica Simpson isn't even a close second and he'd be the first to tell you that. 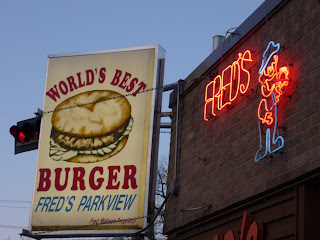 Fred's burger wins best of Wisconsin and that is an honor!

Fred's is your typical Wisconsin bar with some not so average food. Its a very locals like bar and a relaxing place to stop in for a beer and a bite to eat. The walls are decked out in Packers memorabilia along with tons of Tony Romo pictures as well as stories about the burger from a few different print publications. 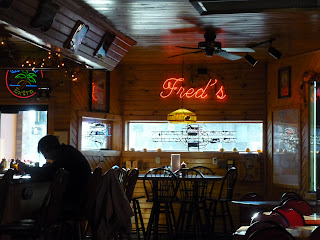 When my friend and I entered the bar, the bartender was quick to greet us and make sure we knew the deal since she most likely assumed we weren't from there with my Bears hat on. You seat yourself and write out your order on a pad at each table and hand it to the bartender who then brings it into the kitchen. When I peeked in the back of the kitchen I saw boxes and boxes of fresh Idaho potato's stacked up to the walls. A good sign, no? 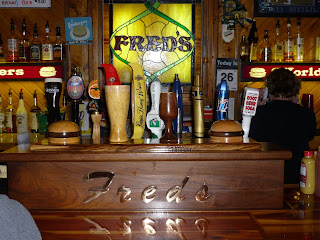 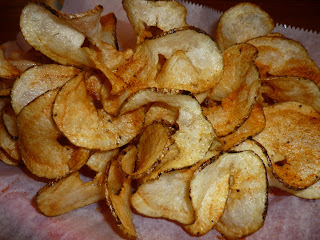 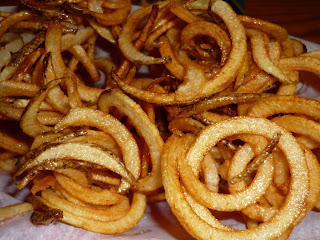 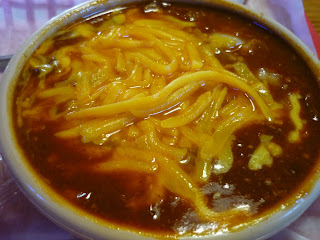 But the star of the show here is the burger. Its a fresh ground (daily) 1/2 lb patty sprinkled with a little spice secret and then griddled until cooked perfect. They top it with a fresh homemade bun from a bakery down the street that is buttered and crisped on the griddle. They offer a wide range of cheeses but I had to go with good old American and grilled onions with pickles. This is after all Wisconsin, also available is a double, yes a double with bacon if you want...next time. 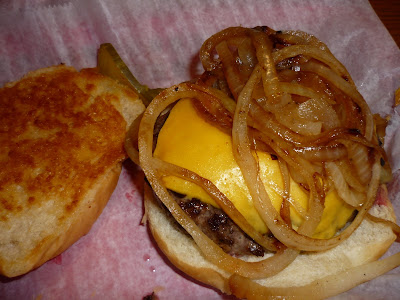 If you could scratch and sniff this photo, you would be in heaven like I was when it arrived. I knew it was going to be the real deal just by the smell and love put into it. 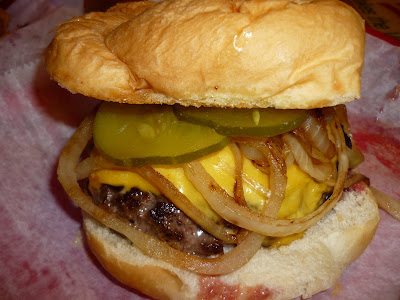 Notice the juice at the bottom of the bun

I got a chance to meet Fred who was arriving as we were finishing up and he was as nice as could be as were all his employees and all the regulars at the bar when we were there. They treated us well despite our Bears loyalty and it made the experience all the better. Its easy to see why Tony Romo is one of the nicest and most down to earth athletes out there. There was a framed newspaper clipping from the local paper the day Tony Romo signed his hefty contract to become one of the NFL's highest paid players. 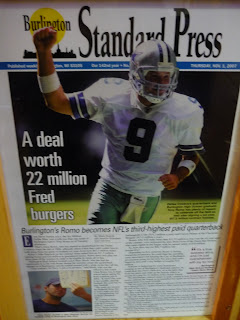 Tony Romo is the real deal

The best thing about this place is its closeness in proximity to so many other good eats in Wisconsin. Which is just full of them. Burlington is about a 20 minute ride from Kenosha and halfway between Kenosha and Lake Geneva. The town of Kenosha is filled with good eats. Go over to LTHForum and search "Kenosha" if you don't believe me. Now when I want to I just get in the ride and drive, I can stock up on RVR five cheese garlic spread, Spotted Cow, groceries from Woodman's like micro brewed mustards and kringle's and Italian meats and cheese's from Tenuta's and grab a beer and burger from Fred's. Thats an area rich, rich, rich in food.

This is a big week in the NFL coming up for da bears and a few other contenders/pretenders and in the game of the week it will be Tony Romo and the Cowboy's vs. The Steelers. I never thought I would be a fan of the 'boy's and I still am not fond of T.O but Tony Romo has proven his worth to T.O, the team and his doubters since he came back from his injury. Can he do it again this weekend? 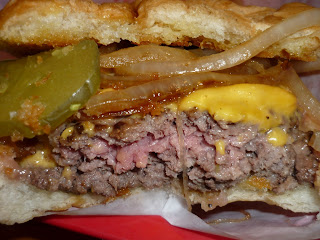 You know me and Tony are good

Well done king tizzle. Your combination of humor, food, and sports is top notch..surely to get noticed by some high up exec. chef at the marriot

Your a rockstar but you already knew that

I live in Burlington and while Fred's has tasty burgers they are NOT the best burgers. Have you ever watched them prepare burgers? They perform one of the biggest cardinal sins when cooking a burger. They CONSTANTLY press on your burger which will leave your burger dry and drain it of all juices!!! I've been there a couple of times (I've grown up here all my life) and both times (2 different cooks) BOTH were constantly pressing down on the burgers. If this place knew anything about making burgers they would know you cannot rush a burger by pressing down on it. Next time your in there just watch them they'll press down on it with the spatula constantly. They should all know this is a big no no. Another unattractive thing is a lot of people bring in small children that run around and yell (this place isn't very big for this) which can also make for and unappetizing atmosphere. I was in there on New Years Day and someone had the audacity to bring a screaming child in there and I'm not exaggerating when I mean screaming and we were the lucky ones they sat right behind. The whole restaurant turned around and looked at these people. We were half way through our meal and the father put his hand over the kids mouth and held it there and proceeded to tell the kid to shut up. Needless to say the child didn't shut up and they proceede to order. We finished up early and left because the screaming was so unbearable. If you want to go eat a burger in peace in quiet you need to go here during a school day or late in the evening. Either way you might want to request they don't squeeze the crap out of your burger.

Not sure what your talking about, I've been to the place you mention...no contest.

Fred's will cook your burger rare if you want it like that. As you can see from the pic of the burger in the post, it had lots of meat juice dripping out. Wasn't dry at all.

Fred's is awesome. great food, great people, and awesome burgers. Comming in a close second is Flippy's just around the corner. Flippy's has the best cheese fries ever!

I am in agreement with Melissa? from Burlington because I have had Fred's Burgers and they are not even close to the best burger I have had.

I am glad the the blogger/writer of this story had a great experience at Fred', but most of the locals that I know don't think much of Fred or his highly hyped burgers. You want awesome burgers then come to my house - sorry Fred you don't have a prayer! One other thought, have you ever heard of a restaurant that charges you for a styrofoam container to take your burgers "to go" - Fred does just that!

By the way, I do like the home made chips, other than that Fred and his burgers are nothing special!

I think that informational articles should be more like yours. By that I mean they should have character. Your article had character and is persuasive. Your views are very interesting. Custom Burger Boxes

I read your blog. Your blog was very helpful for me. Here I want to introduce my business which is related to Custom Burger Boxes.Rush Packaging is the best burger box manufacturers in the USA. We have the best and matchless solution for your packaging. We are here to provide you with our affordable and economical packaging features that prove helpful in advertising your product. You can order us and get your packaging in bulk at very low and economical rates.
Custom Coffee Packaging
Popcorn Boxes Wholesale
Cupcake Boxes Wholesale
Burger Boxes Wholesale

We also offer services to other venues such as cooperate events, day trips, and sightseeing in Central Heathrow Taxi London, Cambridge, Oxford, Bath, Bristol Stonehenge, Windsor Castle, Salisbury, and other cities in and out of London.heathrow executive taxi

Our professional and reliable London Chauffeurs will pick you up at your chosen location ( be it at home or work) and your driver will transport you effortlessly to your next meeting, social event or chosen destination.Heathrow chauffeur service

can cater for clients all around Kent and Builders South East London. We are specialists in building services such as new builds, loft conversions, extensions and renovations of existing properties.Plumbers in South East London

Additionally, consider that the optics (sight/scope best crossbow) on your x-bow might not be appropriate for your particular needs, even if the bow itself is of superb quality.best crossbow under 500

Over 1000 customers have rated their dry cleaning experience with Dry cleaners Norwich as Excellent in the UK.Laundry service Norwich

It is not only about the right colors, shades, or how appealing it is when it comes to Custom Boxes. Customized boxes need to have the perfect shape, the optimum size, and the best material. If anyone of the things mentioned above can ignore, then you will not be able to market your product correctly and efficiently.Custom Boxes Wholesale


I am really happy to say it’s an interesting post to read . I learn new information from your article about packaging bath bombs you are doing a great job. Keep it up.

recognize that there is so much information out there and such a wide range of best crossbow under 500, we have worked to take some of the intimidation out of purchasing a new crossbow.Best recurve bow for beginners

Other than properly referencing papers, college papers online we use advanced software to scan every paper and make sure no part of it is showing as plagiarized. In addition, on detecting any copied portion, we rewrite the entire portion or provide proper citation of sources. So what are writemyessayplz you waiting for? Buy college papers from us today!


En rigtig dejlig frokost med 3 retter og Indisk øl. Helt fantastisk, super serveringstid take away frederiksberg mad. En super god oplevelse på en rigtig dejlig sommerdag. Rigtig autentisk mad.
This will cause a negative impact on your customers. Packaging plays a shirt boxessignificant role in terms of your product image marketing. Therefore, every brand needs to know the significance of the lively and special packaging material according to the suitability of your product and your requirements.