Eating like a local: Regional food specialties
-The Hub of the U.P (Marquette, MI)

Over the summer I took a trip around Lake Michigan that took us through four states and along side three great lakes. We took a detour up to Lake Superior to stop in Marquette Michigan located at the bottom of Lake Superior in the Upper Peninsula. It was the best stop on the circle tour. It was a real scenic little city that had good eating and a fairly wild nightlife during the summer. It seemed everyone I talked to that lived in the area loved it and wasn't planning on leaving anytime soon...I could see why. 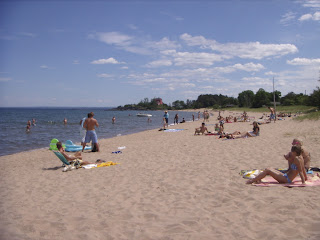 Now I know why they call it Lake Superior. I was really impressed with the great great lake. The water was cold and I saw lots of ships transporting whatever they do and it just seemed so much more great than lake Michigan.

Now before you start asking yourself "why is this being posted now, its 10 degrees in the UP right now" well this true but Marquette is also the home to Northern Michigan University and the UP is home to some so called mountains for skiing and snowboarding, good in this part of the country anyway and its fun for kids and adults who like to have a good time. For adults there is snowmobiling and hunting and a few casinos for the party people along with the outdoor jacuzzi's and fireplace's at all the ski cabins around the area. Its also the home to Christmas MI and home of the worlds largest Christmas store. So as you can see this post has some relevance goddamnit. For the kids amusement...the kids!

Marquette had a really nice eating scene and the beaches were packed by day and the bars were packed into the night. I really like the ladies up there, great time in a great town. The first place we got to check out for food was one of my favorite stop's on the trip. The coney joint was within a stones throw from our hotel the Ramada Inn's entrance and they served coney dog's and sliders along with shakes and some really good thin cut fries. I ended up eating here a total of four times during our time spent...really good roadfood type place, which is what I'm all about. Don't ask me why but Coney dogs are chili dogs from the Detroit area and the state of Michigan while Michigan dogs are hot dogs with chili like "sauce" from upstate New York. 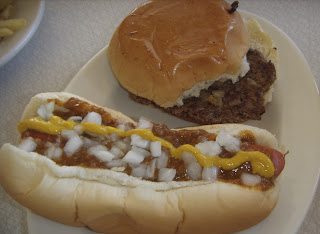 Coney Dog and Slider from The Coney Joint (Marquette, MI) 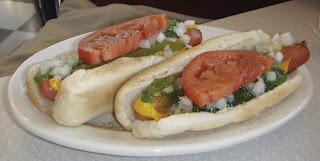 DatNizPiz felt the need to get two Chicago style dogs... 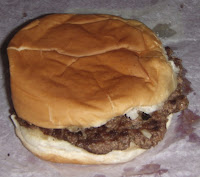 Im a sucker for sliders...these were good ($1 after 7p everyday)

Marquette is a nice little town on the lake with a very high average of good food to population total. Like alot of of the little Midwestern cities there's alot of different independent local favorite dining type options for a city of 20,000. Two of the better spots for sit down dinner and drinks are Vierling's and Lagniappe. 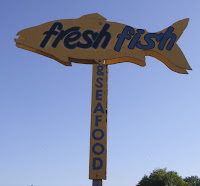 Vierling's has some fresh, fresh whitefish 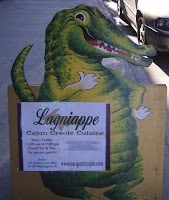 As expected the super fresh whitefish at Vierling's is superb. They get it fresh from Thill's daily, the local monger is located just down the block on the lake. We each had it a different way, grilled, blackened and baked, all were exceptional. Sorry but no pictures of the food for the first time ever. 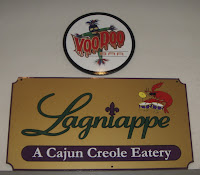 Tucked underneath the towns main drag

I love Cajun and in Chicago there really isn't anything good so I always jump on the chance when I see a spot on the road. We ate at the bar where the bartender was very friendly in giving us advice and tips on what to do around the area and where to go at night, this was my favorite restaurant of the trip. Everything was really good including the live music and atmosphere each time we were there. The bartender who's name escapes me poured some damn good Hurricane's. Unlike the Pat O'Brian's version these were a different recipe that were made by pouring dark rum into the bottom of the glass, fresh squeezed mix of juices in the middle and light rum on top. The reason I cant remember the name of the dude bartending was b/c I had three category five hurricanes before we ate. Hurricanes were served category 3, 4 or 5. Higher the number the more liquor. 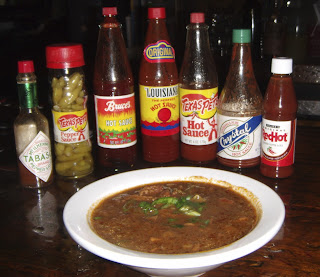 bowl of real gumbo with the basket at the bar's selection of hot sauces. 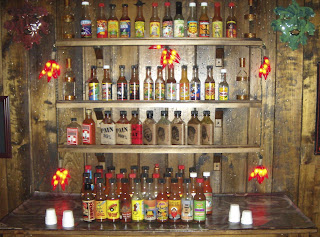 hot sauce bar for your food

We also got introduced to the owner who was a nice super nice lady who wanted to know all about our trip and how we liked the UP and her place. It turns out she has a daughter who graduated from cordon bleu in Chicago and is now working at a restaurant down in New Orleans and will one day move back home with some new recipe's and knowledge of the cuisine and take over the family spot.

Lagniappe was a very satisfying spot and all the food was darn good each time. Lagniappe closes around 9p so our first night there, a local Cub's fan directed us to "The dog house" a bar directly across the street and where they carry the MLB season ticket and show all the Cubs games. After the game we stumbled over to the up-front which was the spot on Wednesday's. Very fun although I don't remember much. The days were spent on the beach and the nights on the town. Its a different place in the winter but still as satisfying if you like the outdoors during winter. Its scenic no matter what season your there and I assume they do a good tourism biz year round. 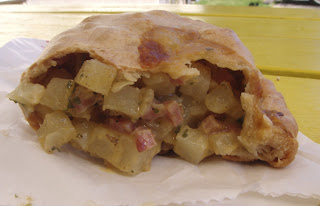 Don't forget to eat a few pasties if you make it to the area!