Just in case you haven't figured it out by now, Chicago has more hot dog stands than McDonald's, Burger Kings, Subway's, Wendy's, Jamba Juicy's and Taco Bell's combined. The truth is that about 95% of these places are more than passable. If they were spots in other parts of the country with nothing but strip mall food they would be great. Who knows maybe one day I'll get to all of them, which seems almost impossible because there are so, so many. Here is a peak into two more. 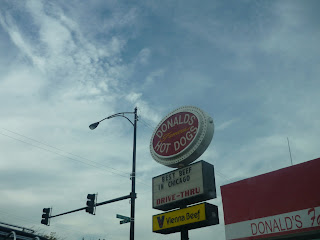 Considering that Western ave is the longest street in the world I am going to put the over under on hot dog stands located on Western ave at 54.5 and Donald's does a respectable dog with some average run of the mill fries sprinkled with a little spice dust. 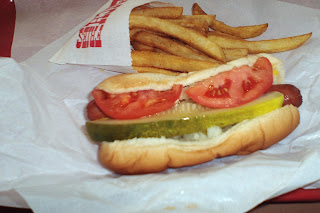 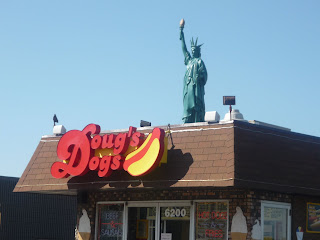 What the hell is this Doug? were in Chicago

Doug's dogs is located out in da burbs and has quite an unusual practice. They ask if you want a beef or pork hot dog. Really? Doug, were in Chicago. We eat all beef hot dogs either Vienna beef or Best's Kosher and nothing else. Doug also offered up a bunch of different ice cream flavors from the machine leading me to believe they get alot of family's feeding kids. Maybe the Oscar Meyer wieners were for the kids amusement? Parents if your raising your children on Oscar Mayer's than you should be looked at by child services. It is an injustice to any child who grows up in or near Chicagoland to be fed Oscar Mayer tube meat. On top of all this, whats the deal with the statue of liberty? Doug were in Chicago.