The best gyros you've never had

Just like it had been a while since I brought you pizza, its been a minute since we stepped into the gyro-tron. My next stop is a little hidden gem a food compadre told me about when the topic of gyros was being discussed. The poster brought up the fact that a little place called cafe Orchid that is tucked into a miniature strip mall with a flower shop and a Dunkin Donuts/Baskin Robbins. The owners are of Turkish descent so they call it doner but it sure is a tasty version you wouldn't expect to find tucked away in this little restaurant. What a coincidence I said, I have driven by that place for the last 10 years and always said I would stop in and try something and just a little while earlier I did just that but didn't see a gyro spit and settled on falafel. The falafel was excellent so I knew I would be back and was informed by the devoted customer that the gyros is a lunchtime thing. 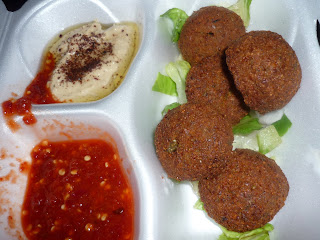 Some of the better falafel I've had in the city

Over the fall on a random Sunday right before the Bears game I stepped out to grab a bite to eat and when I ended up driving by Orchid I drove on in to finally give that gyros a try. I stepped inside and realized that its much bigger than it looks from the outside. There is a dining room that goes into the back and a small little waiting area for pick up and take out orders. cafe Orchid sports an entire Turkish menu but I was here to try the gyros and was pleasantly surprised when I saw a spit of fresh meat ready to go.

Upon ordering the sandwich the waiter asked if I wanted a traditional pita or a Turkish type of flat bread that makes it more like a burrito but still just as tasty and I chose the flat bread. I watched as the spitmaster made sure that each piece that he cut off was perfectly cooked and he was a pro with the knife slicing it nice and thin. The end product was one of the better gyros in the city and by far the best in the Lakeview neighborhood. Unfortunately the fries were your average run of the mill frozen fries but they were a real treat when drenched with a cup of the tzatziki which was also top notch. the onions and tomato were fresh and the lettuce laced with vinaigrette was a nice touch. The meal was a gut buster for under $7 and is now a regular spot in my rotation. 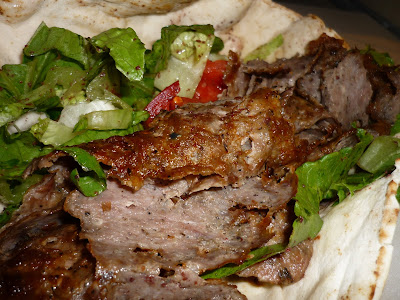 Orchid Cafe gyro (sauce on side)