Lenten season is one of my favorite times of the year, but not bc I'm religious. For one it's usually the start of Spring. We get that extra hour of sunlight which just seems to put people in a better mood. Second reason I love me some Lent is all the fish fry's hosted by local churches. Each Friday during the lent season one doesn't have to look far to find a church where they're hosting a local fish fry. 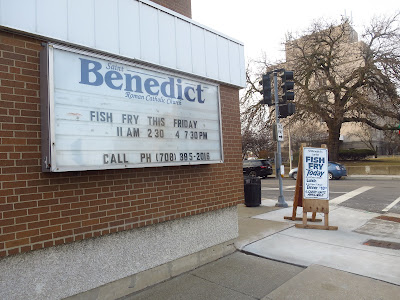 While you'll find a few in the city limits your best bet is the suburbs. Particularly the suburbs where either Indiana or Wisconsin aren't far away. Today we head out to Blue Island and visit one of the most well known in that area. St. Benedict Parish has been a part of Blue Island for over 150 years. It's both a church and also an elementary school. Their locally famous Friday Fish Fry is held every Friday during Lent. This is the 48th year they've held these festivities so it's built up quite a loyal following over the years. I visited just last week and arrived with the early birds around 5p. The fry is held downstairs in the church's basement. When I arrived there was quite a few old timers as well as a big group of kids running around chasing each other back and forth. Entry is $10 for fry and sides. 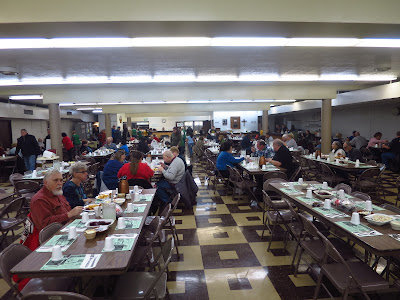 After you pay at the door you'll be given a ticket which you keep until you find a seat and one of the old timers comes and finds you. She takes your ticket to the kitchen where your plate is made and delivered by one of the young schoolgirls. On your plate will be a couple pieces of fried haddock as well as some fries. Each table also has a big bowl of both sliced red beets, and a long time cole slaw recipe that seems to be almost as popular as the fish itself. Of course packages of rye bread and big bowls of tartar sauce are also included. A somewhat unique offering if you ask for it is a salsa made yearly by some members of the parish. St. Benedict has a quite a large number of Hispanic families in their congregation and this is the Mexican touch to the fish fry so to say. It goes good with both the fries and the fish. I don’t do the church thing but I’ll fuck with your food. That said the Friday Fish Fry is all about community and I plan on checking out a few more local fry's during this Lenten season.