The food team over at the Tribune just finished up Korean month. They featured Korean food all month long (they pick a different topic each month) and that wasn't close to enough time for them to cover it all. Which had me thinking how Korean food has worked it's way into one of the best offerings of international foods in Chicago. How many other cuisines could get a whole month of coverage dedicated to them in Chicago? Mexican for sure. Chinese and some would say Italian but there's not a ton of others. Anyways new Korean spots continue to pop up frequently. One of them being this second location of a Korean BBQ favorite located at Foster and Western. San Soo Korean BBQ. 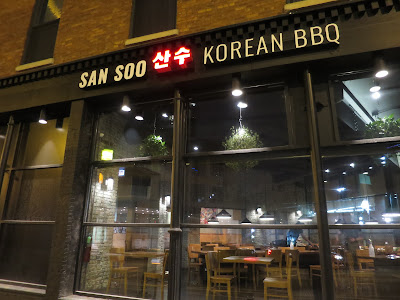 The original San Soo Gob San is a staple of Chicago's Korean restaurant community. An OG so to say. You can pretty much count on seeing groups of people waiting outside to eat when driving by. With name recognition like they have the son decided to open his own spot on Milwaukee right at the corners of Kinzie and Des Plaines. Late last year I saw a mention from Steve Dolinsky aka The Hungry Hound and he had lots of good things to say. After seeing that we decided to stop in on our annual end of the year restaurant crawl where me and my wife try to check out a few newer spots we hadn't had the chance to check out yet. The inside space is nice. It'll be extra bright inside during their early hours. Through Dolinsky I learned the kitchen here is being run by two brothers who also run a stand downtown called City Rock Korean Kitchen. It gets favorable reviews and the all the food looked good so we got a few things to eat on our visit. The only flop was a flappy seafood pancake. The other problem with the pancake was it seemed to be a bit greasier than others around town. The waitress suggested the volcano omelette which cooks table-side as it arrives boiling hot. I enjoyed this with the assortment of Banchan on offer (keep reading). But you have to eat it fast or it hardens. 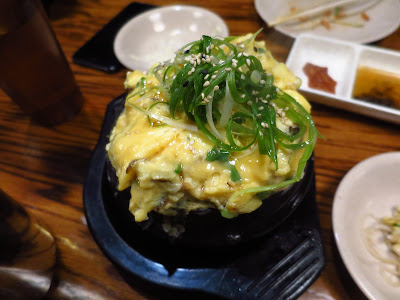 The highlight of the meal and one of my favorite rice dishes around town now is the dolsat kimchi fried rice. I've made the rounds around town sampling kimchi fried rice which is something I get a craving for pretty regularly. In all honestly I started making it often at home bc it's pretty easy but one thing I dont have is a dolsot bowl to serve it in. I suppose I could always go buy one but I dont know if I'll be able to put out something as perfect as San Soo's version. A dolsot is a stone bowl which is heated until extra hot before the rice goes in. Over the next 15-20 minutes a wonderful soccarat is created which is all the crispy bits of rice stuck to the bowl. There's not many spots doing kimchi fried rice this way. Bonus points for the wonderful chunks of smoky bacon and perfectly poached egg. 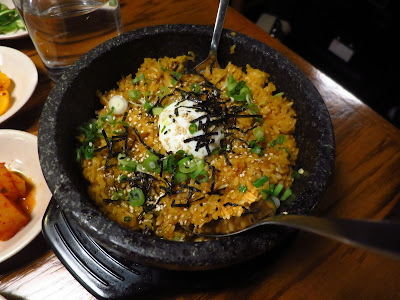 But the main draw of customers here is the BBQ. That's what the original location is known for. I don't get out for Korean BBQ often but whenever I do I enjoy it immensely. However I am a bit of a snob when it comes to the grilling part. I'm not a fan of the electric grills as they dont produce the same flavor as real charcoal. The latter of which is a rare find in restaurants these days. So as far as non charcoal Korean BBQ goes this was really good stuff. The banchan in particular was abundant with options all of which were available for refill. We got a 1/ lb of pork belly and then another half. It browned up so nicely alongside some onions, jalapenos, and mushrooms. When paired with that kimchi fried rice it makes for great meal which I'm sure I'll be craving shortly. Maybe even this wkd. 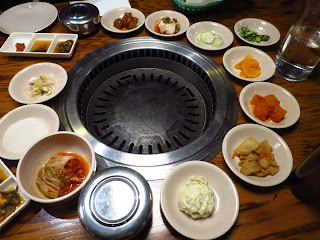 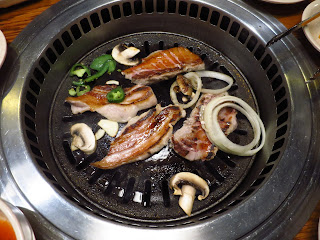