-Grubbing in Chicago
Izakaya Eats in the West Loop

Tengoku Aburiya has been open since the summer of Covid (2020). It’s the sister spot to the Michelin starred Omakase Yume that sits next door. Tengoku is an izakaya meaning Japanese bar food is what they do. It’s a casual space that can typically take walk-ins so basically the opposite of the upscale omakase next door. The whole purpose of an izakaya is to present the customer a comfortable spot to have a bite to eat with some drinks on a low key. My type of place so I don’t why it took me so long to finally get over here as Japanese bar food is second to none. 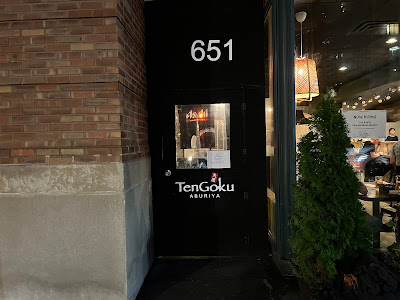 Locals Favorite in the West Loop

If there’s gyoza on the menu I have to get an order. Tengoku does a pan fried beef and vegetable version that was soupy from being so juicy. Really good. Moving on we also got a pristinely made Korean pancake off the daily specials board. I didn’t get a pic but it was one of the better ones I’ve had in part due to a bunch of chopped scallions tossed in some sort of spicy oil concoction and loaded on top. Both the pancakes and scallion mix were a textural pleasure with plenty of crunch coming from both of them. 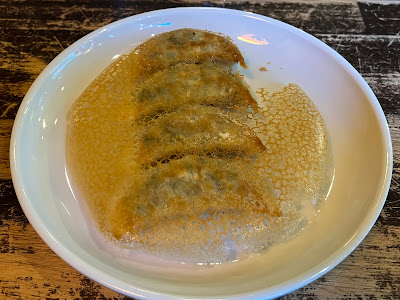 Gyoza at Tengoku
It’s pretty typical for an izakaya to specialize in some sort of dish and Tengoku chooses to give special attention to it’s Kushiyaki (a generic term for skewered grilled meats). For those wondering yakitori (skewered chicken) is a form of Kuskiyaki. We each ordered a chefs special kushiyaki platter which consists of four skewers of the chefs choosing (4 meats + 1 vegetable). Each of us was presented with a different set. Mine came with a Negima Yakitori (chicken and scallion), chicken skin, enoki mushroom wrapped with a thin strip of beef, and fried shishitos. They were all good with the crispy chicken skin being my favorite of the bunch. 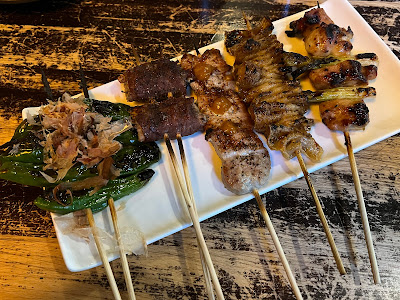 Kushiyaki Set
Next up was the chefs choice nigiri set for each of us. I’m not a big sushi person but it’s something I do enjoy getting every now and then and my dining companions wanted to get some so I rolled with the flow. We each got five pieces of chefs choice nigiri and a roll of tuna tekkamaki to go with it. One of the reasons I don’t eat a ton of sushi is I have trouble distinguishing the good from the really good. I typically enjoy it no matter the price. One of my dining companions was a regular sushi eater and he called our sets “good but not great” so I’d suggest doing the omakase next door if you’re looking for sushi that really shines. I thought it was pretty good and it hit the spot as I hadn’t had sushi in a minute leading up to our visit. 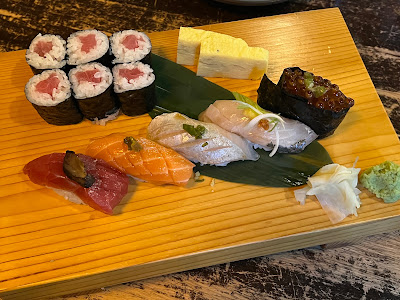 Nigiri Set
Last up was an order of Mazasoba which the three of us split. Though this dish is typcially called Taiwan Mazesoba it's said to have originated in Nagoya. This is a dry noodle dish mixed with ground pork, fish flakes, seaweed, green onion, chives, minced garlic, sesame seeds, and egg yolk, served with a side of rice. The picture below is how it looks when it comes out before being tossed. There’s a pool of liquid at the bottom of the bowl which coats the noodles when tossed. This one hit all the high notes with thick and chewy noodles coated in an umami laden sauce. An excellent ending. 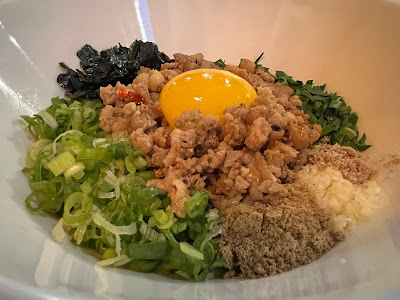