Asian food is taking over the globe in ways it hasn't before. Chinese food has always been popular but we’re seeing a major shift in the Quick Service Restaurant spectrum which has seen an influx of Asian leaning franchises start to open up across the country. Some of the more popular offerings at these spots include Bubble Tea, Korean Fried Chicken, Korean Style Corn Dogs and the newly trending Mochi Donuts. I feel like most of us know what Korean Fried Chicken and Bubble Tea are by now but Korean Corn Dogs are still on the rise ever since becoming popular on tik tok out in LA. The biggest difference in a Korean Corn Dog and a corn dog as most of us know them is the Korean corn dog is made with rice flour. It was back in September of 2019 that I got to try my first mochi donut while in Seattle. I became an instant fan among many other Seattle-ites who were lining up to try these unique at the time donuts. Mochi Donuts aka Pon de ring donuts are a product of Japan where they moved into Hawaii before coming to Seattle and now the rest of the country. Some suggest the name has less to do with the glutinous rice flour that's associated with foods called mochi and more to do with the phrase mochi-mochi, which describes a uniquely soft but elastic and bouncy texture. 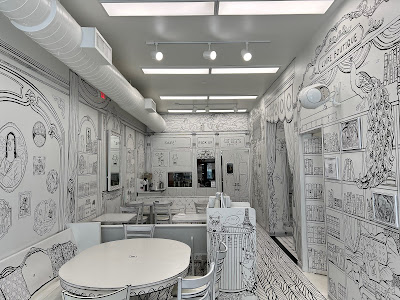 Our first stop takes us to Lakeview and a place where social media people flocked too upon it's opening. 2d Restaurant on Halsted is the city's first 2d cafe. The entire inside of the restaurant is hand-drawn two-dimensional monochrome illusionary that makes you feel like you're in a comic. Korean fried chicken and mochi donuts make up for what might be Chicago's most instagrammable / tiktokable dining destination. I visited with my young nieces who each got a kick out of it. You have the option to get your chicken tenders crisp or extra crisp and it comes with a sauce of choice and fries. I liked this for what it was which is some extra crisp juicy fried chicken. No complaints at all on that front and while the donuts were also good they were a tad bit too cold with a chocolate covered churro and a pina colada being our choices. The lines seem to have died down (weekdays anyway). 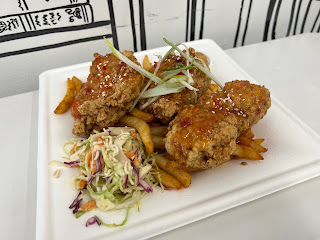 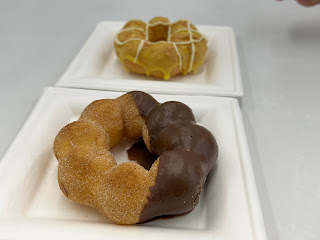 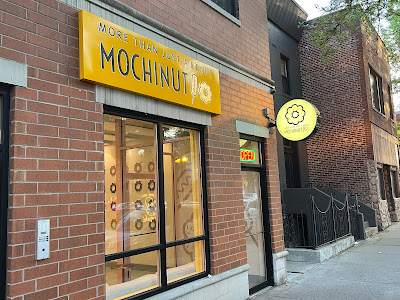 Mochinut
A mochi donut and corn dog chain based out of Los Angeles recently opened it's first Chicago location over on Taylor Street. Mochinut is a name you should expect to hear more as they continue their expansion. They currently have four more Chicagoland locations planned including one in Lincoln Park. Their menu boasts more than 20 types of donuts though they're not all available at the same time. Along with the donuts they also do corn dogs and bubble tea though I dont think they've started to serve the other two just yet. These arent cheap coming in at $3.75 each but they are satisfying. 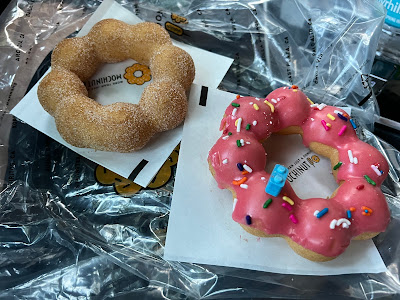 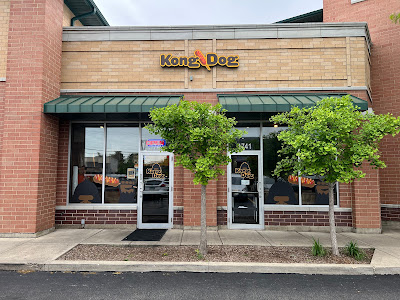 Kong Dog
Korean Corn Dogs are popping up all over and Kong Dog is a newish spot that boasts locations in both Glenview and on Taylor street. It's owned by a local who tried Korean Corn Dogs in LA and wanted to bring them to Chicago. The menu showcases about eight different options including their most popular which is dusted with Flamin' Hot Cheetos. The ordering process is pretty easy in that you pick your style which for me was potato which means theres diced potato included in the breading. After that you pick what you want your corn dog stuffed with which can be a hot dog and or cheese (cheddar and mozzarella). I opted for half hot dog and half cheese (mozzarella) with my choice of sauce being the sweet chili option. Unlike traditional corn dogs these are not easy to eat on the go. They're huge and served piping hot which means the cheese will come oozing out. I liked this more than I thought I would. Sure it's festival food but it hits all the notes of what makes festival food fun to begin with including the fact they turn heads. Expect lines on Taylor street for the time being. 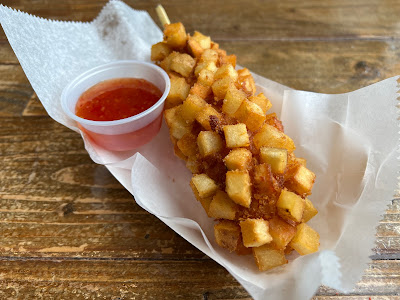 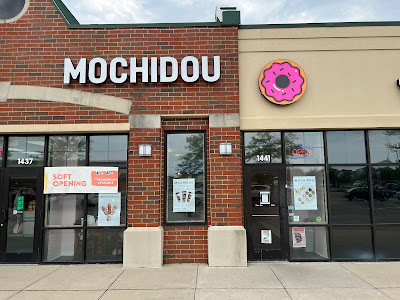 Mochidou
The best mochi donuts I've tried around town thus far come from Mochidou in Hoffman Estates. There's very little info online about this spot but they just opened and they also do bubble tea. The menu switches weekly with about eight different donuts on offer including an ube and strawberry which are pictured below. No surprise to find these out here where there's lots of Asian food options. 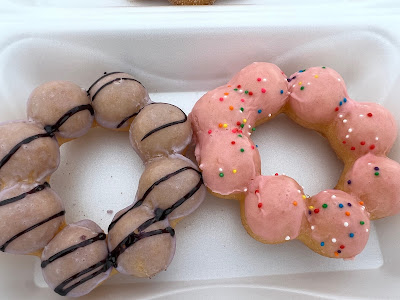 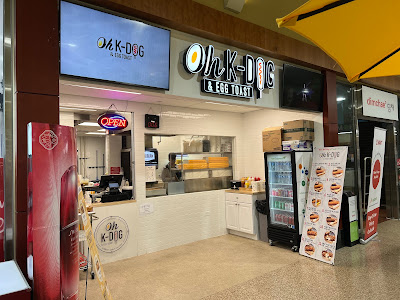 Our next stop takes us to the H-Mart in Niles where Oh-K-Dog has opened their first Illinois location. I read somewhere that they're a Texas based chain with locations in more than five states including a few in NYC. Korean Corn Dogs are just one of their draws with the other being Korean Egg Toast. I decided to try the latter since while tasty, Korean corn dogs are similar from spot to spot. Egg Toast is another popular snack amongst Korea's youth and it's basically a breakfast sandwich. Thick slabs of buttered brioche secures surprisingly soft and silky scrambled eggs along with other ingredients that vary by selection. My ham and cheese also came with a mayo concoction that worked well. 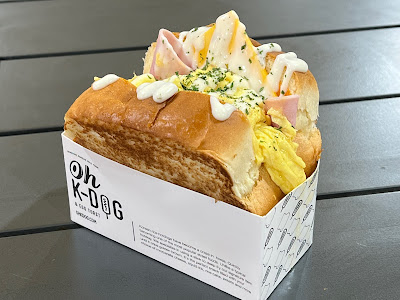 Cool list — great to see these. I'll definitely check them out. Would be great to have their addresses here, too.

The food was fantastic and the service was great! I would definitely like this restaurant to anyone looking for a good Asian Fusion meal. I also take these types of food at Fusion & Dumplings House. that was great.