One of the best parts about living in Logan Square is the local restaurant scene. One can easily make the case it's the most well rounded dining neighborhood in the city. There's lots to like and the same can be said for the local bar scene. One thing Logan Square lacks when it comes to restaurants is something the city lacks as a whole and that's Black owned spots. Chicago doesn't seem to have as many places as other cities with large Black populations do. The one dining spot in Logan Square I can think of that is Black owned is The Duplex which opened a little over a year ago to date. It's located on the Square in the space that used house Dunlay's on the Square. It's the first project from a local guy with more than 20 years experience and the goal is to give local chefs a platform who might not have one otherwise. This is being done by hosting two different chefs every six months. 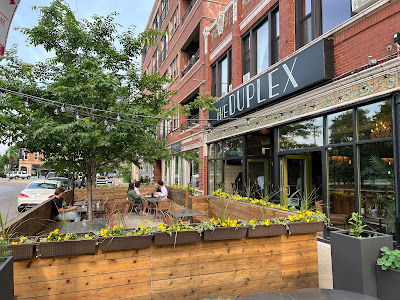 Newly Opened in Logan Square
At the moment The Duplex is host to both Cacahuates and Kalista. The former of which is ran by a young lady who's professionally trained and draws inspiration from all over Latin America. Kalista is a Mediterranean inspired menu that also pairs well with summer. I stopped in with the wife one Sunday night and there was a pretty live scene as they also have a full cocktail program to go with the food. My pina colada inspired drink was maybe the best part of my meal and that's by no means a knock on the food it was just a really well made drink that was perfect for a warm summer day. The ordering system is entirely done from your phone which isn't ideal but is understandable in the time of both covid and staffing issues. But I missed the intimate experience of personal recs and such. 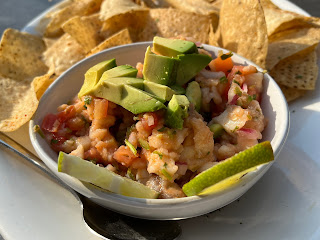 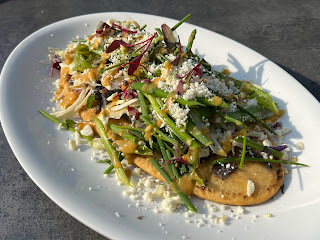 Food from Cacahuates
We ordered with the weather in mind and ended up with two items from each menu. First up came those from Cacahuates which was a ceviche that was totally fine, maybe not as exciting as you hope a ceviche to be, but one that still tasted nice and fresh and about as good as you might expect in Chicago. We also got an excellent tlacoyo which is an oval shaped disc of fresh masa cooked and then topped with  Poblano black bean spread, queso fresco, cabbage, herb salad and red tomatillo salsa. Moving onto Kalista where an order of the "Chicken Bites" is a nice dish to order for a group. The balls are made with hand breaded chicken so they're by no means light which is why I mention them as being good for a group. They come with an extra refreshing side of tzatziki sauce that works really well. Moving on we also got a blackened blackened mahi mahi pita which was good but I envisioned something different with a full filet and not the smaller pieces. But it gave me ideas on building my own fish sandwiches with pita bread and I could use the inspiration as I'm trying to cook more fish this summer.  We dined on the patio outside which made for  a lovely evening. But I can see it getting pretty loud on the weekend so be prepared for that kind of atmosphere if you go over there. 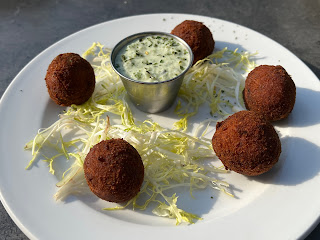 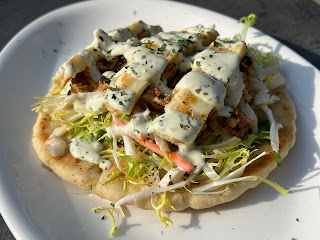