-Grubbing in Chicago
Developments in Chinatown

A Happy Chinese Lunar New Year to all! The 15th (and final) season of S'C'&C begins today and with that we're headed to Chinatown to celebrate. It remains one of Chicago's best and most interesting dining neighborhoods in large part due to it's increased growth which has been the main catalyst behind regular openings of new spots. Another catalyst is we're seeing the ushering in of a new Chinatown and the exit of an old one. Like the rest of the city and most everywhere else around the country it's becoming much more corporate. Old school spots are shutting down and being replaced with what seems to be mostly bubble tea shops and chains. The latter of which isn't necessarily bad but for the most part these places seem to be doing a similar menu with options like fried chicken, wraps and ramen popping up. That said many of these places are opening in newer developments that aren't replacing older restaurants bc the developments they're in are completely new. I'm talking about the building at 2252 S. Canal which is starting to see some spots open up (more to come) and also the building at 2105 S. Jefferson which hosts 88 Marketplace among handfuls of other recently opened businesses. Today we'll visit five spots that have more or less recently opened up shop. 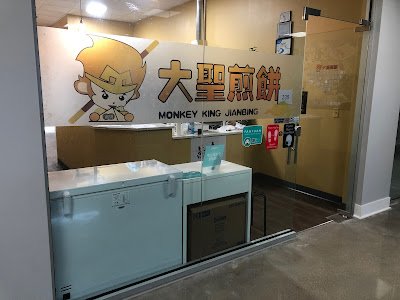 Monkey King Jianbing
You kind of need to know about Monkey King Jianbing to find it. It's highly unlikely that you'd find it on a stroll through the neighborhood since it's located on the second floor of the previously mentioned development on Canal. I first visited back in December of 2020 when it had just opened up. I was driving by and saw a sign on the door that said jianbing which caught my eye as I'm a fan. Jianbing is a Chinese crepe that's rolled with a variety of fillings which most always includes a cracker among chili and hoisin sauce and maybe some sausage if that's what you want (popular without meat too). Though I’ve had Jianbing in Beijing I’ve still only had it from a handful of spots total but I’ll tell you what - it always seems to be satisfying. Typically eaten on the street for breakfast. This one was crunchy from both the fresh veggies and fried crackers (bao cui) inside. A great way to start the day. 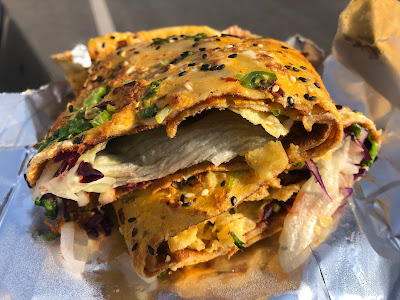 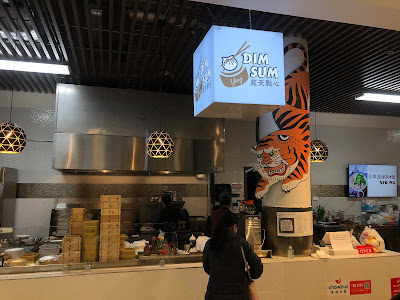 Ying Dim Sum
I mentioned the newish 88 Marketplace in the opening and Ying Dim Sum is one of it's tenants. The building at 2105 S. Jefferson was renovated a couple years back and it's main tenant is a large Chinese Supermarket and within the market are a handful of food stalls. The turnover here has been pretty high to start. So much so that I visited twice in the span of a week last November and on my first visit the stall where Ying has opened was hosting a different business. Well the dim sum in their name caught my eye and I decided to step in and try a few things. The menu has lots of the classics including siumai and rice crepes which can both be seen below. In between those is an order of their Taishan dumplings which had a jelly texture, they were interesting. Unlike in NYC rice crepes aren't all that popular in Chicago so I don't have many others to judge these by but they were fine. Siumai are pretty much always good as were these but I still list those from D'Cuisine as tops in town. 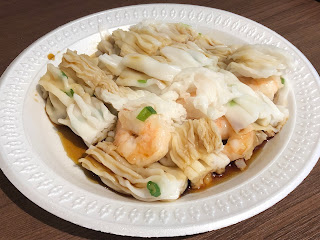 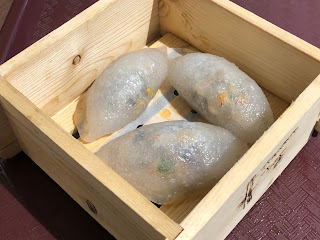 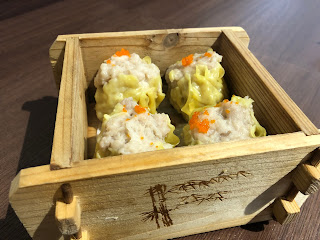 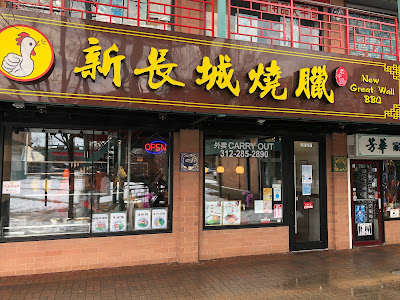 New Great Wall BBQ
The latest spot to open up shop in Chinatown Square is neither a bubble tea shop nor a chain. New Great Wall BBQ seems to be a reboot of the old Great Wall Chinese Restaurant which it replaced. I visited just this week and it had a very locally owned feel. The reboot makes the former sitdown spot more of a takeout place as Chinese bbq is the feature. They offer up all the classics as far as that goes. For a first time visit I decided to try the bbq pork as that's a favorite of mine at BBQ King down the square. They also had some really good looking chicken wings hanging in the window that were very tempting. But I settled on some bbq pork over white rice which comes with a few bunches of bok choy, a cup of chicken broth and a thousand year egg all for $8 which is a steal of a deal. 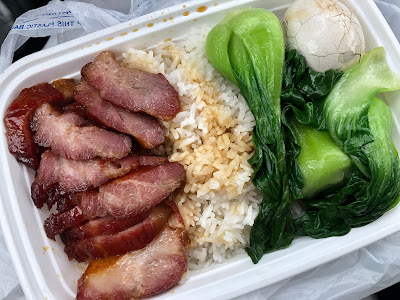 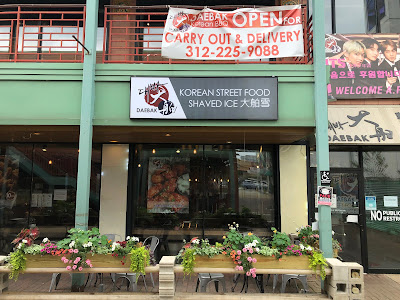 Daebek Korean Street Food
If you're active on social media or follow any type of TikTok food accounts you've probably seen a thing or two on Korean corn dogs by now. They're a popular trend as a handful of spots now serve them when a year or so ago there was really just one place making them (inside Assi Plaza). A few of the new Korean corn dog shops are full fledged brick and mortars and at times people have been known to line up to get one. So what's a Korean corn dog? Pretty much a corn dog with the choice of a hot dog, rice cake, cheese and sometimes even a fish cake inside. I was surprised when I got one from Daebek Street Food in Chinatown Square and it was only half of a hot dog (ordered with cheese which is what the other half was). These are good in that state fair food sort of way. I wouldn't go out of my way just to eat one but if you're hopping around Chinatown you can try one of them there. Daebek also does Korean shaved ice aka Bingsu. 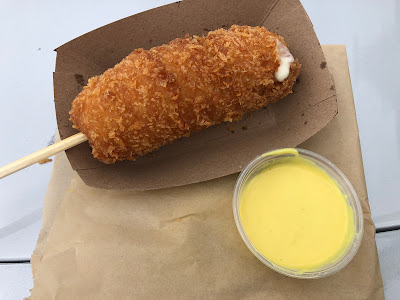 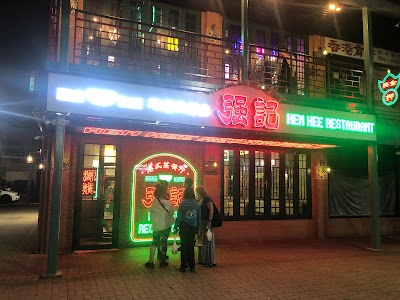 Ken Kee Restaurant
Ken Kee has been a fixture in Chinatown Square for as long as I can remember. But it was almost lost when it was sold and bought by the owner of Strings Ramen. But instead of making it nothing more than a memory they decided to spruce it up a bit so to say. I think the overall result is a net positive as Ken Kee is still around and so is the Hong Kong style food they've always made. But there's noodle soups that have been added to the menu and those are now front and center. I stopped by this past October when the weather was starting to turn and I really enjoyed their take on seafood laksa which isn't something you see too often around town. It's popular in SE Asia where curried soups are common. This one hit the spot and did in fact bring me back to a bowl of laksa I enjoyed in Hong Kong. The best part of it was the noodles which are the same ones used at Strings. 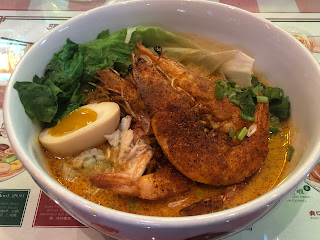 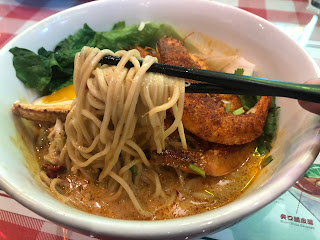 I understand blogs are dying, but you will be missed if this is the final year. I have used your a few times for places for lunch, that's hard to replace. I hope you can maybe update some of your links for sites to visit?

man, I hate to hear this is the final season. I love your blog, thanks for doing it.

Been a long time follower here and also when you regularly posted on LTH. You've allowed me to visit places when I travel, especially the recs in South Africa and the taco tours on the west coast of Mexico.

This will be sorely missed by those who follow your journeys.

Very Good blog. A good Effort from the Author Side. The Best SMM Panel provides the powerful promotion of social media accounts to enable you to Beat your competitors. We would be pleased to grow your business with our best SMM panel services. Get Total SMM Panel Services for Social Media Marketing Purposes. Get Non-Drop Likes Followers Views and Watch time from our SMM Panel in USA, UK, Europe.