The Skokie area has some sneaky good little spots when it comes to Mediterranean and or Middle Eastern restaurants. Today we visit one of the latter in the form of an Iraqi grill and bakery. Skokie Grill and Bakery as it's called has been around for about five years now and it's been on my "to try" list for about the same amount of time. Well I finally had a chance to stop in for lunch just the other day. 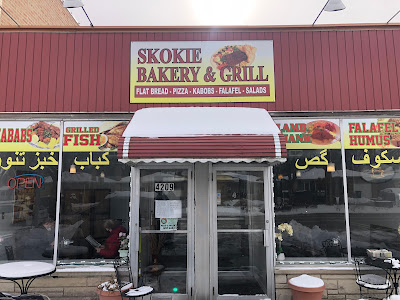 Locals Favorite in Skokie
When I think Iraqi food the first thing that pops into my mind are the kababs at Iraqi Kabob House in Dearborn (one of my favorite dishes anywhere). Most all of the online reviews for Skokie Bakery & Grill are good and the kebabs are mentioned a few times in the reviews. But the most common mention is the grilled fish. Specifically the masgouf. I was surprised to learn that grilled carp is considered the national dish of Iraq. The friendly owner knew I did my homework bc I told him I was ready to order as soon as he sat me. He appreciated that fact. Skokie Bakery uses pompano for their masgouf but it's served the traditional way in that it's split lengthwise down the back before a typical marinade of olive oil, rock salt, tamarind, and ground turmeric goes on before grilling. You can order the masgouf from here in small, medium, or large portions with the small being more than enough for one. It comes served with fluffy basmati rice and a rather tame bowl of split pea soup. I like to throw the grilled fish over the rice so that the rice can take on some of the char grilled fish flavor. 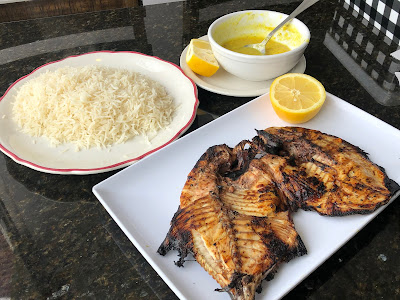