-Grubbing in Chicago
The OG LEY Restaurant in LP

Last night I paid a visit to a place I hadn't been to in at least a decade if not longer. Actually I have no idea when the last time I ate at R.J. Grunts was but it's one of a few spots still around that I remember visiting as a kid. It's the flagship for Chicago's most recognized restaurant group in Lettuce Entertain You. It opened at the same location it is today in 1971. The dining room still has a major 70's vibe. 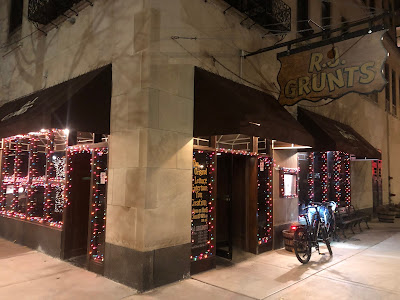 Locals Favorite in Lincoln Park
I love spots like Grunts that haven't changed much but some stuff isn't the same. The first of which is the salad bar that was part of the reason they became so famous around town. It's now virtual which isn't surprising with the current virus going around the world. I'm sure the menu has also been slightly tweaked over the years but I wouldn't remember what was on it during my youth visits. That said the atmosphere and the inside are pretty much exactly as I remembered. There's no denying the vibes. 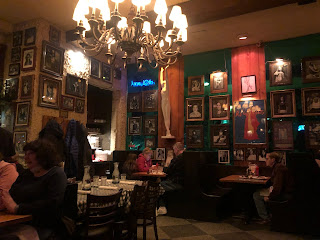 a peek inside
The reason for our visit is pretty much the only reason for a visit. I accompanied my mom and two young nieces (4 and 2) to Zoo Lights. When in this situation (parking being hard and young kids) there aren't many food options save for those inside the zoo and also R.J. Grunts which is a short 5 minute walk from the zoos main entrance. So Grunts it was (on my sisters dime). First off let me just say that you're going to pay $4-$5 more for everything here than you would elsewhere. As you can imagine it was packed with the Zoo Lights being on and all. I decided to go for a cheeseburger bc that's what appealed most to me from the menu which is typical 1990's bar food. Burgers come served with cottage fries which are just homemade chips that have always been average at best. The 1/2 lb burgers are char grilled and while not bad they aren't anything special. I ate the whole thing and enjoyed the change of pace from the typical double cheeseburgers you see all over the place today. But at just under $20 per you're paying for more than the food and that's the convenience factor of eating anything other than the food served at the zoo. It's like choosing a restaurant at the airport over the food served on the plane. Sometimes it'll do, like those times your other options are very limited. 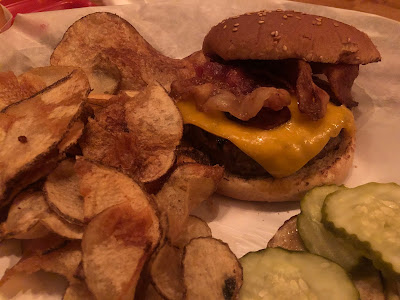