For the final Chicago restaurant feature of 2021 (best of the year post coming next week) I want to showcase one of my favorite openings of late. Avenida Peru is a family owned Peruvian joint in Belmont Central that opened up during the second half of the calendar year. Chicago has maybe a handful of Peruvian restaurants but this one is a bit different. The family behind it has roots in Lima. 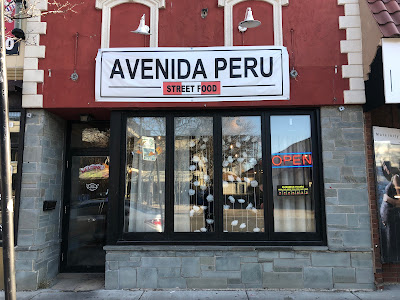 Most people who travel to Peru might spend one night in Lima, as a layover between their arrival in the country and their main reason for visiting - Machu Picchu. But those in the know aka people that like to travel for food know that Lima is the undisputed gastronomic capital of South America. The food of Peru is a conflation of indigenous Peruvian cultures from the Amazon mixed with Spanish and Arab and Moore influences that were fused with African, Chinese, and Japanese ingredients and culture. The use of the word "melting pot" is overplayed but Peruvian food is a true melting pot of flavors and if you want to experience the best it has to offer Lima is where it's at. I think you could make the case that Limeño's (people from Lima) are as food obsessed as anyone. So while the menu at Avenida Peru is somewhat similar to other Peruvian places around town it's also a bit different. 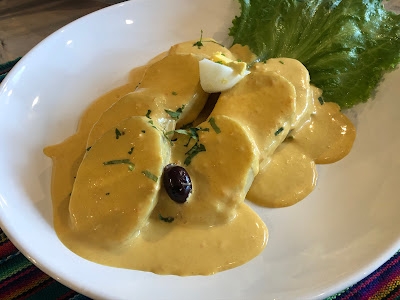 Papa a la Huancaina at Avenida Peru
The potato is a staple in Peruvian cooking. Peru has more than 3,500 different varieties of potato and there's something like 4000 varieties total. So most of the worlds potatoes can be found in Peru. If you like potato salad you'll likely enjoy the Peruvian staple that is Papa a la Huancaina. It's a simple dish with roots in Huancayo, Peru that consists of boiled potatoes that sliced and served cold covered in a creamy and cheesy sauce that gets lots of it's flavor from the use Peruvian aji amarillo peppers. 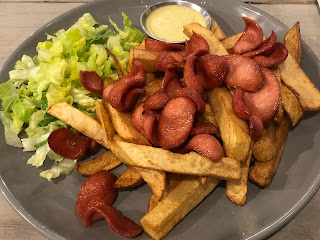 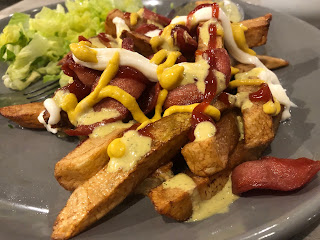 Salchipapas at Avenida Peru
Speaking of popular potato dishes in Peru they do a sick salchipapas here too. It's a popular snack in Peru consisting of fries mixed with slices of fried hot dogs served with a handful of sauces. Some people prefer the sauce be served on top and others like to put them on themselves. So they're kind of a custom have it the way you like it type snack. Common sauces included would be aji (Peruvian green hot sauce), ketchup, mustard, mayo and sometimes salsa rosada which is a mix of ketchup and mayo together. The reason I decided to try the version served at Avenida Peru was bc they do fresh cut fries for theirs which isn't as common as it should be. Most spots just use frozen fries. I ordered mine with the sauces on the side and enjoyed the combo of hot dog and potato (Gene & Jude's, Jimmy's etc) dipped in aji sauce. About halfway through I threw all the sauces on top and that was damn good too. The fries weren't twice fried so they weren't perfect but they were full of potato flavor. 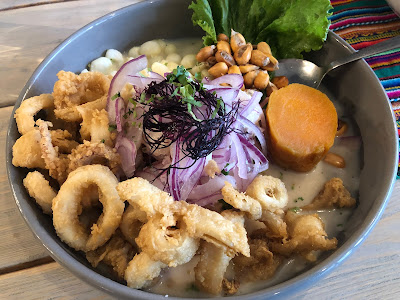 Ceviche Carretillero at Avenida Peru
Ceviche is to Lima as tacos are to Mexico City. Everyone in Peru has a favorite spot for the country's national dish. The practice of saturating raw fish in vinegar, citrus, and spices (escabeche) was brought to the Americas from Spain and is linked to the Muslim heritage in Spanish cuisine. Both Peru and Ecuador claim the dish as their own but nowhere is it as popular as it is in Lima. Chicago has a handful of Peruvian restaurants and some of them serve ceviche but go down to a place like South Florida and there's handfuls of spots specializing in ceviche. I never really found one around town that could match some of the spots in the Miami area until I tried the ceviche carretillero from here. There's countless recipes for making ceviche but the basis is raw seafood, lime juice, lemon juice, chilis and Tigers Milk which is the citrus based marinade (mixed with fish stock) that makes the magic happen. One popular way to eat cebiche is mixed fried calamari. The "Carretillero" which loosely translates to "wheelbarrow" also mixes soft corn, crunchy corn, sweet potato, and more. 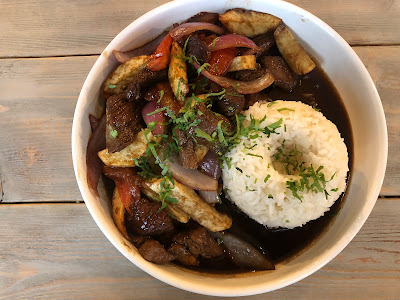 Lomo Saltado
A large number of people from Lima have Chinese ancestry and the city is home to the largest Chinatown in South America. The Chinese first came to Peru as indentured servants to replace the slavery of Africans which had been abolished. As time passed the Chinese population grew and with it so did their influence on the local food and culture. Lomo Saltado is a dish that's as Peruvian as it gets in that almost every Peruvian restaurant both in Peru and outside of Peru will serve this dish that has it's origins in Chifa cuisine. Chifa is what they call Peruvian Chinese food which is a staple in Lima. The city is home to 100's and 1000's of Chifa restaurants where they serve Chinese style food with Peruvian influence. Lomo Saltado is perhaps the most well known as it's found in many non-Chifa restaurants too. Avenida Peru might make the best version of this dish I've tried but it's not like I've had a ton of different ones. The basis of Lomo Saltado is stir fried steak that's been heavily marinated mixed with onions, tomatoes and fries. It's all cooked up in a wok with a liquid mixture of aji amarillo and soy sauce. White rice comes on the side. Avenida Peru uses those fresh cut potatoes and the steak is so tender and juicy. This was the first dish I tried here and it was so good I had to come back and try more. "Chifa Chaufa" is Peruvian fried rice, another popular Peruvian-Chinese dish. They do one here with chicken and thinly sliced hot dogs and it's some of the best cooked fried rice in town, of any style. It's loaded with ginger and extra smoky wok flavor. 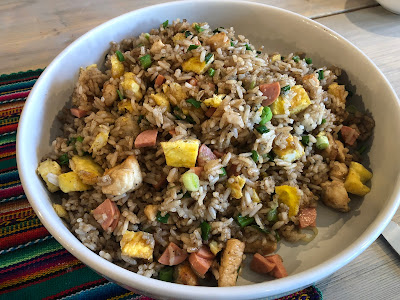 Chifa Chaufa (Peruvian fried rice) at Avenida Peru
Avenida Peru does breakfast every Saturday and Sunday morning and the menu includes sandwiches. I've always considered Lima to be one of the worlds great sandwich cities as they have a handful of originals like the Pan Con Chicharron. Timeless simplicity is the key to this breakfast favorite that pairs crunchy pieces of pork belly with crispy slices of sweet potato. Both a slightly spicy aji sauce and also a cup of lightly pickled red onions come on the side for you use as you please. As far as breakfast sandwiches go this is an absolute winner that should be in your morning rotation. The bread was well paired with the rest of it too. It should come as no surprise that on each of my three visits the place was near full with mostly Peruvians from around town. Chicago is home to more than 20,000 Peruvians and word is spreading amongst them about Avenida Peru and it's delicious food. 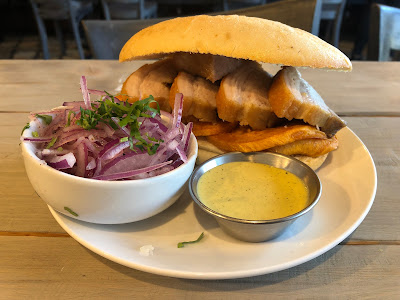 Hello guys, I just want to share my joyful experience about HACK VANISH CREDIT SPECIALIST. Before the coronavirus pandemic, I had criminal Judgments, few evictions, and late payment which negatively impacted my credit score down to 487 and left me in difficult financial situation, as a single mum of 3, I needed a loan to keep the family running after I lost my husband as a result of COVID-19, all hope were lost, until Mrs. Olivia referred me to HACK VANISH, a credit genius who was very helpful in fixing my credit 6 days after I reached out to him via Email: hackvanish (At) gmail (Dot) com and Phone: +1(747) 293-8514, throughout the process, I felt so involved because an open line of communication was maintained till I got my FICO score restored to 796, currently my loan application has been approved. If you need to hire a credible hacker, HACK VANISH is highly recommended.


Howdy! I could have sworn I’ve been to this site before but after browsing through some of the post I realized it’s new to me. I also fell on this
ONE OF THE EASIEST WAY TO ACQUIRE REAL PASSPORTS ONLINE IN LESS THAN NO TIME Anyways, I’m definitely happy I found it and I’ll be bookmarking and
checking back frequently!