I didn't expect to find some of the best fried chicken in Chicago hidden inside a sweet shop but that's what happened after following a tip. I had heard that Ms. T's had an association of sorts with Harold's. Aside from their location in Uptown I had heard about a semi new spot on Broadway in Boystown. Since it's not all that far and the sudden crave for Harold's had came, I decided to go over. 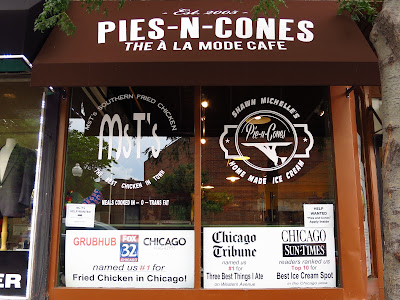 I don't think there's any current connection but after eating a six piece wing, there's little doubt there's a former connection. I would pretty much sum this up as Harold's with care. As it turn's out, Ms. T used to work there before going out on her own. You can taste the love so to say. The biggest difference is in the spuds. Ms. T is making fresh cut fries which still go great when combined with a deboned flat wing and made into a fling. Becuase it's fried to order you can be assured you're getting a crispy batch of piping hot chicken. They offer up a variety of meals for a small or large group. 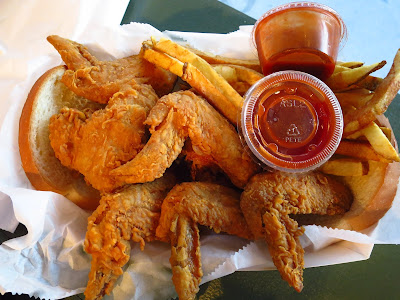 Six Piece Wings (Hot and Mild on the side)

Hot and Mild sauces on the side was by choice which I wanted so I could first taste the chicken as is. Although I'm addicted to the flavor of that sauce combo those who are not will still get some nice spice out of this chicken. It's some of the best fried chicken I've had in Chicago. Those that enjoy Harold's will most likely find joy in Ms. T's. I'll be back here for more when the crave comes. 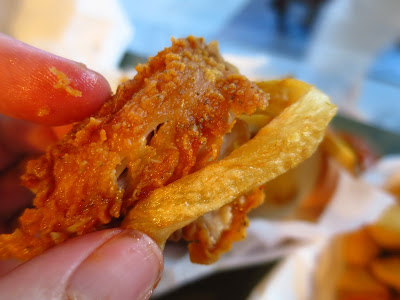 Preparing for a fling