-Grubbing in Chicago(land)
Amazing Middle Eastern in the SW Suburbs

When I read that there was a new Middle Eastern restaurant in the SW Suburbs that was worth trying I took note. As regular readers know I'm out that way now and then and have explored the Middle Eastern Eats of the area. Well it turns out that the new kid on the block is a spot you need to know about. I was tipped by a guy over at LTH who knows his stuff when it comes to this cuisine so it was no surprise to find out the place was as good as advertised. Maybe better than that. 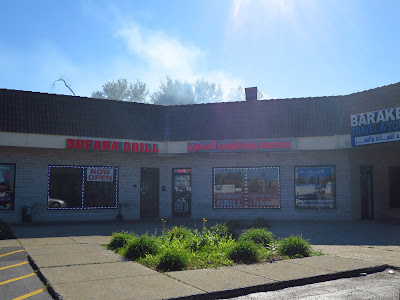 As you can see in the pic up above the shopping lot Al Sufara sits in can get smokey. That's due to the fact that all the cooking here is done over charcoal. Both the lamb and chicken shawarma lay diagonally over a bed of coals while the area to the left is used for grilling kebabs. 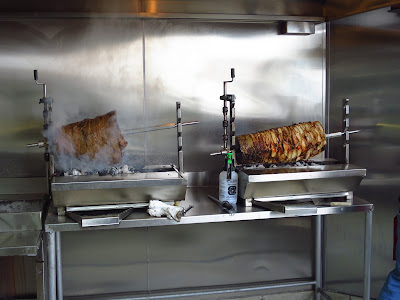 Atmosphere is about the same as most every other shawarma spot I've stepped inside and that's ok bc it's all about the food. First visit in I decided to try the combo plate as the kebabs sitting in the display case caught my eye. Beef, Lamb, Chicken, it all looked good so I wanted to try all three. 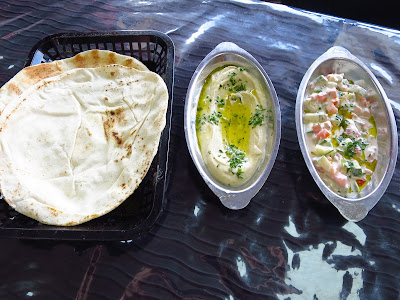 Sides with your platter

Meals include the hummus that my tipper labeled the best he's ever had in a restaurant. Damn, that really was best hummus I've ever had. So creamy and extra soothing on one's tongue. As far the kebabs go these are as good as it gets. It's my belief that if you want them any better you need to go directly to the Middle East. The flavor in these is all about the kiss of charcoal that each skewer gets. Just fantastic. They have a huge storage locker with big ass pieces of meat hanging. All of the butchering is done in house. These guys are dead serious about their craft. 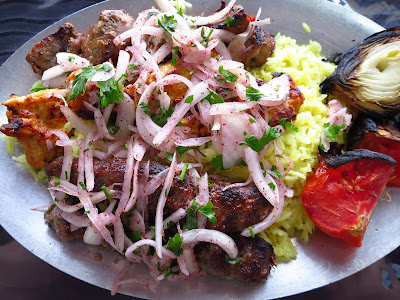 I got a chance to go back this weekend and was excited to try the shawarma. It too lived up to the excitement. Again it's all about the smokey taste they develop by rotating spits of meat over live fire. I tend to prefer chicken to lamb/beef when it comes to shawarma and that was the case here. I just felt the meat was a bit more tender but it all tasted delicious. This is the peak of the Middle Eastern food mountain in Chicagoland and you need to go climb it. Worth the drive from the city. 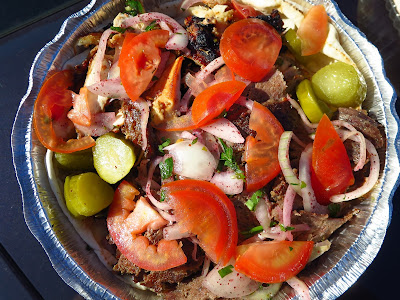 I really enjoy your blog! I got a chicken shawarma sandwich (really a grilled wrap) and hummus today from Al Sufara, my first time there. The chicken was really good, very moist, but could use more spices. The sauce, onions, etc. they put on the wrap is killer. I enjoyed the hummus, but I think the hummus from The Best Shawerma is even better. I think it's the best I've ever had. It's so smooth it makes you wonder how they do it, and the flavor is great. The shawarma there is drier, but the spices and spicy kick makes up for it in a big way, and they give it a quick crisp on the flat top. I think you'd enjoy that as well. It's on 79th about 1/2 mile east of Harlem: 6934 W 79th St in Burbank.

I'll try the kebabs and a mixed shawarma plate next time I hit Al Sufara.

Start following our signals today & gain up to 270% a day.

Great Information sharing .. I am very happy to read this article .. thanks for giving us go through info.Fantastic nice. I appreciate this post. Best Electric Grills

Herbal treatment is the most effective treatment you can do