Unless you've been spending your online time in a food desert somewhere you probably heard Umami Burger has made it's way to Chicago. The Southern California burger chain got it's start in Hollywood before expanding to other parts of the area and then across the country to New York City. An interview with the owner came off as if he thinks Chicago's turn has come as the city's dining scene expands. Although I'm not sure he'd ever visited before, otherwise you know Chicago is one of the country's best dining destinations. Anyway we should feel blessed they decided to grace the Wicker Park neighborhood with their presence. Or should we? 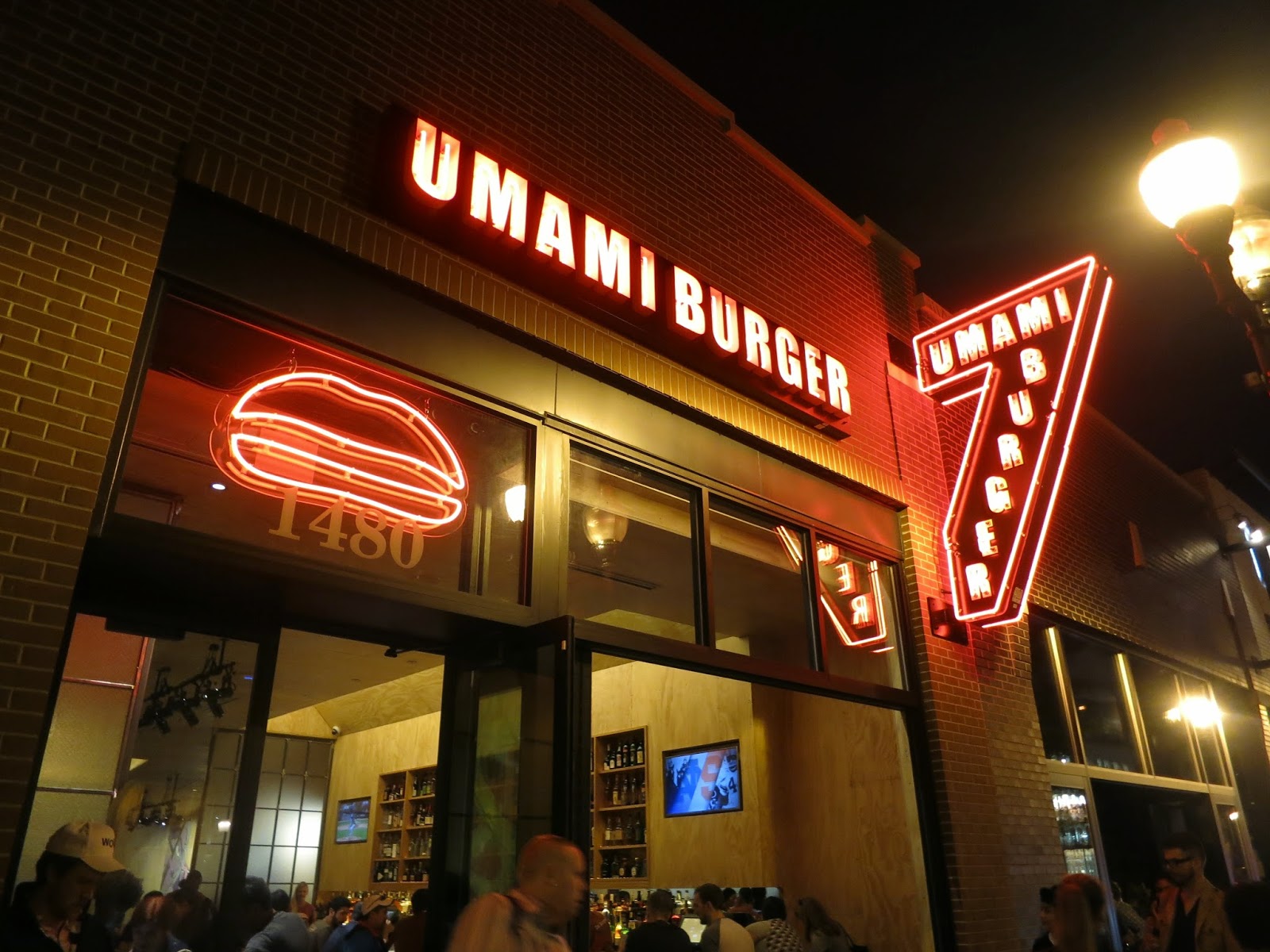 Before diving into the food lets discuss the setup. It's really nice inside. I like how for during the warmer months they have the front windows completely open. The bar sits about 15-20 people then there's booths for groups. First come first serve at the bar while you'll need to see a hostess to be seated. On my visit this past weekend around 6p there was a one hour wait but a couple seats at the bar appeared not too long after putting our name down. We grabbed them. 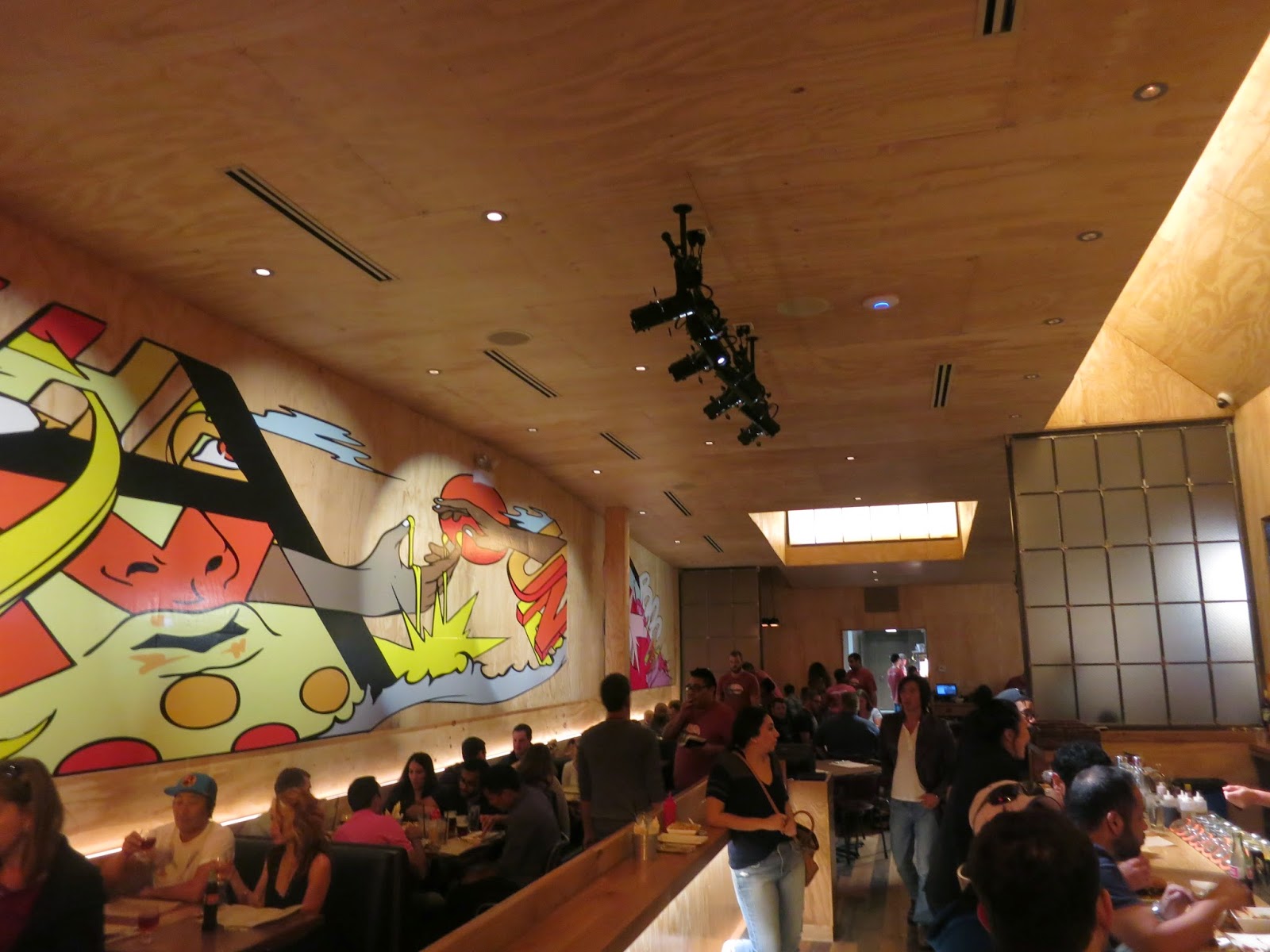 It seemed as though folks dining at the bar were doing so in 15's meaning everyone was ordering and eating and then finished around the same time. This made for a busy job for the two of them behind it, they couldn't keep up. The bar boasts a pretty nice selection of both draft and bottled beer and also a pretty intriguing cocktail menu. I don't know if the drink menu is seasonal but many of them sounded like the perfect drink for a warm summer day. Seeing as how warm weather wasn't going to be here much longer I decided to try a couple. I was very pleased with each of them, impressive for a place just opened. Each drink will set you back $11 so this isn't a cheap meal if you're eating and drinking. After about a 45 minute time lapse while waiting to place the order we got ours in. I wasn't too upset with this because they were packed and the poor girl behind the bar was working her ass off. First appetizer up, tempura battered onion rings and than an order of Umamified fries to go with them. 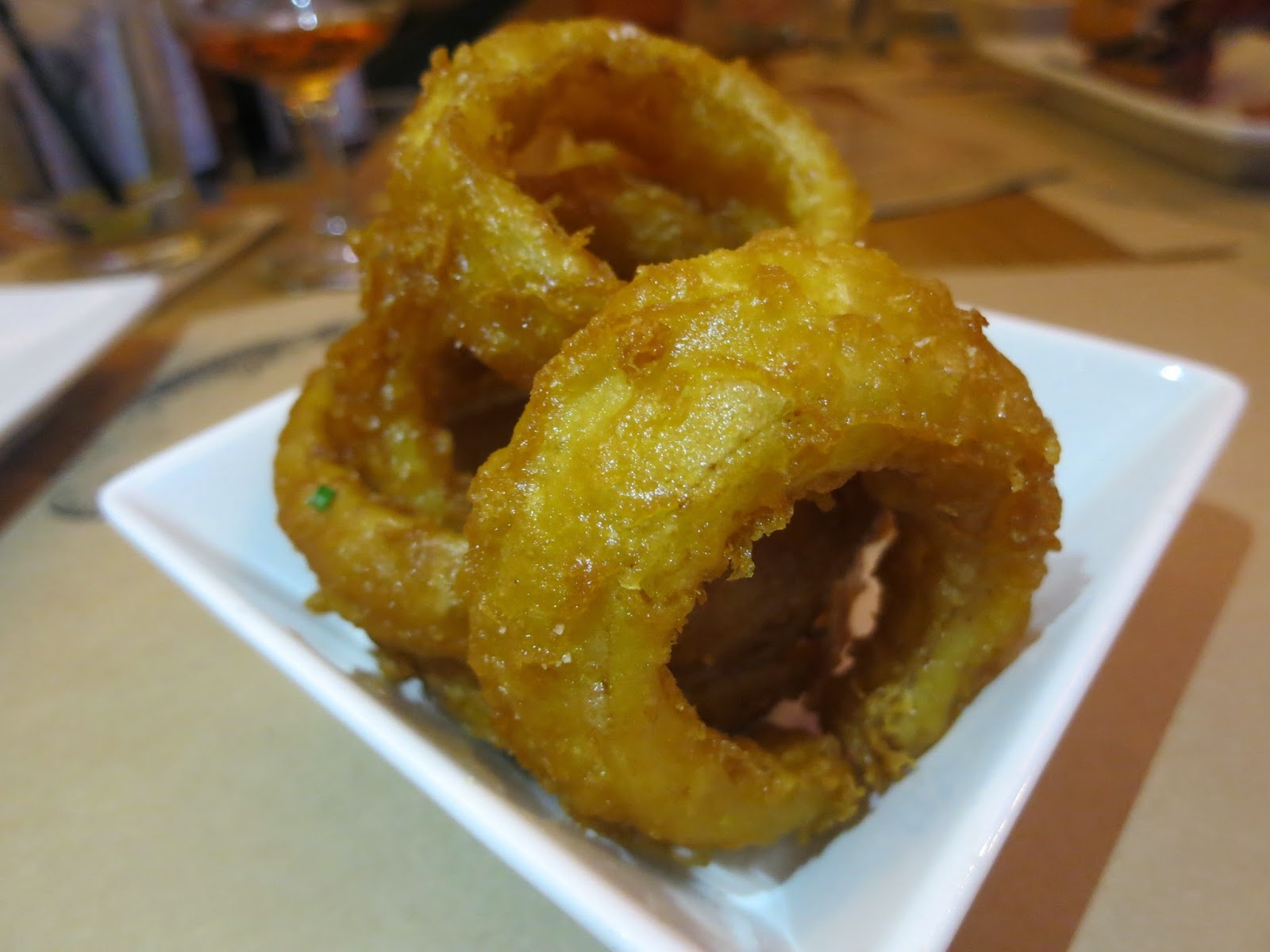 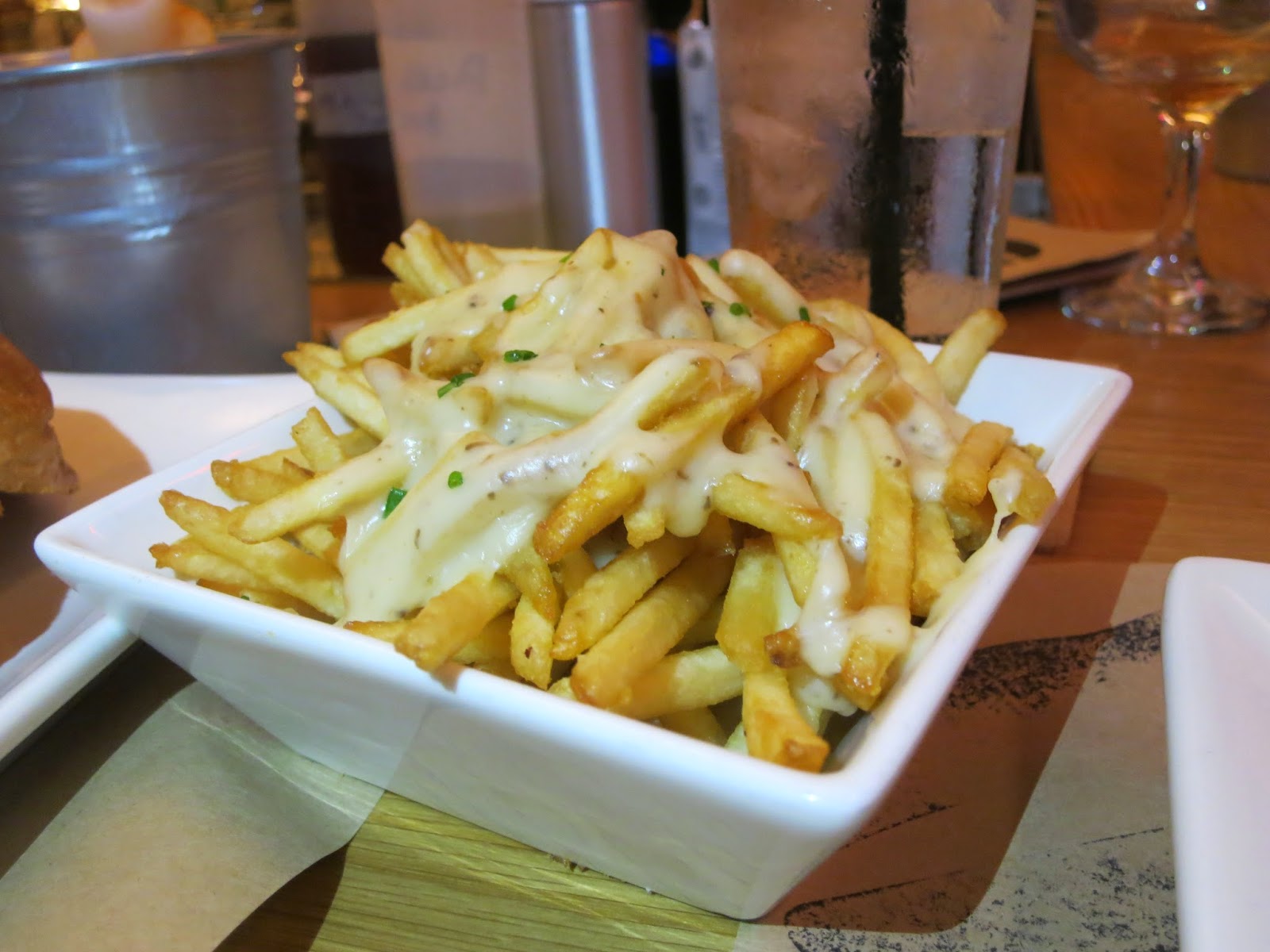 Both sides were pretty good. The thick cut onion rings had a fantastic batter though the taste of onion was minimal. They bring out a little basket of sauces for you to enjoy with them. All mayo based. The fries were richer than any spuds I've consumed and for that I liked them, though a split order was more than enough as far as tolerance. Onto the burgers. Each Umami location sports a signature burger that isn't available at any of the other outlets. Looking at some of the others they seem to try and create one with flavors from the area. For that we get the Calabrese which is a Italian seasoned sausage patty with truffled aioli, house truffle cheese and their own homemade blend of the city's signature giardiniera. The description sounded like something right up my alley and luckily for me also up hers. I convinced her to order it. 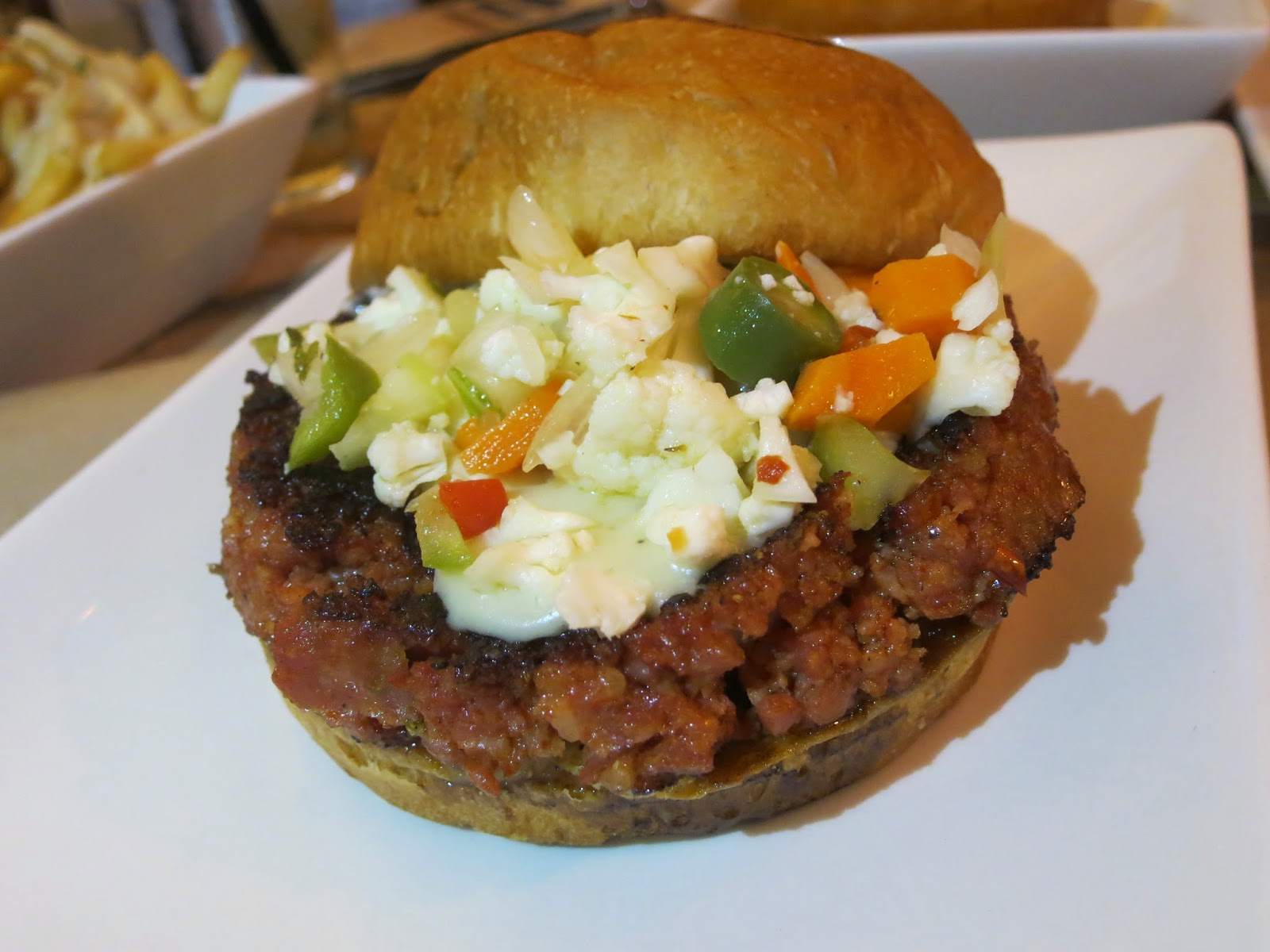 Thoughts? They got some work to do with this one. Way to salty and the truffle aioli and cheese totally took over the flavor profile. The actual sausage patty was loose but sturdy and if it had not been bombarded with salt and instead had some subtle fennel notes to it, maybe it could of been better. This being my first visit to any Umami location I had to try their signature offering, the name sake burger. They take their signature blend of beef and top it with a Crispy Parmesan frico, shiitake mushroom, roasted tomato, caramelized onions and Umami house ketchup. 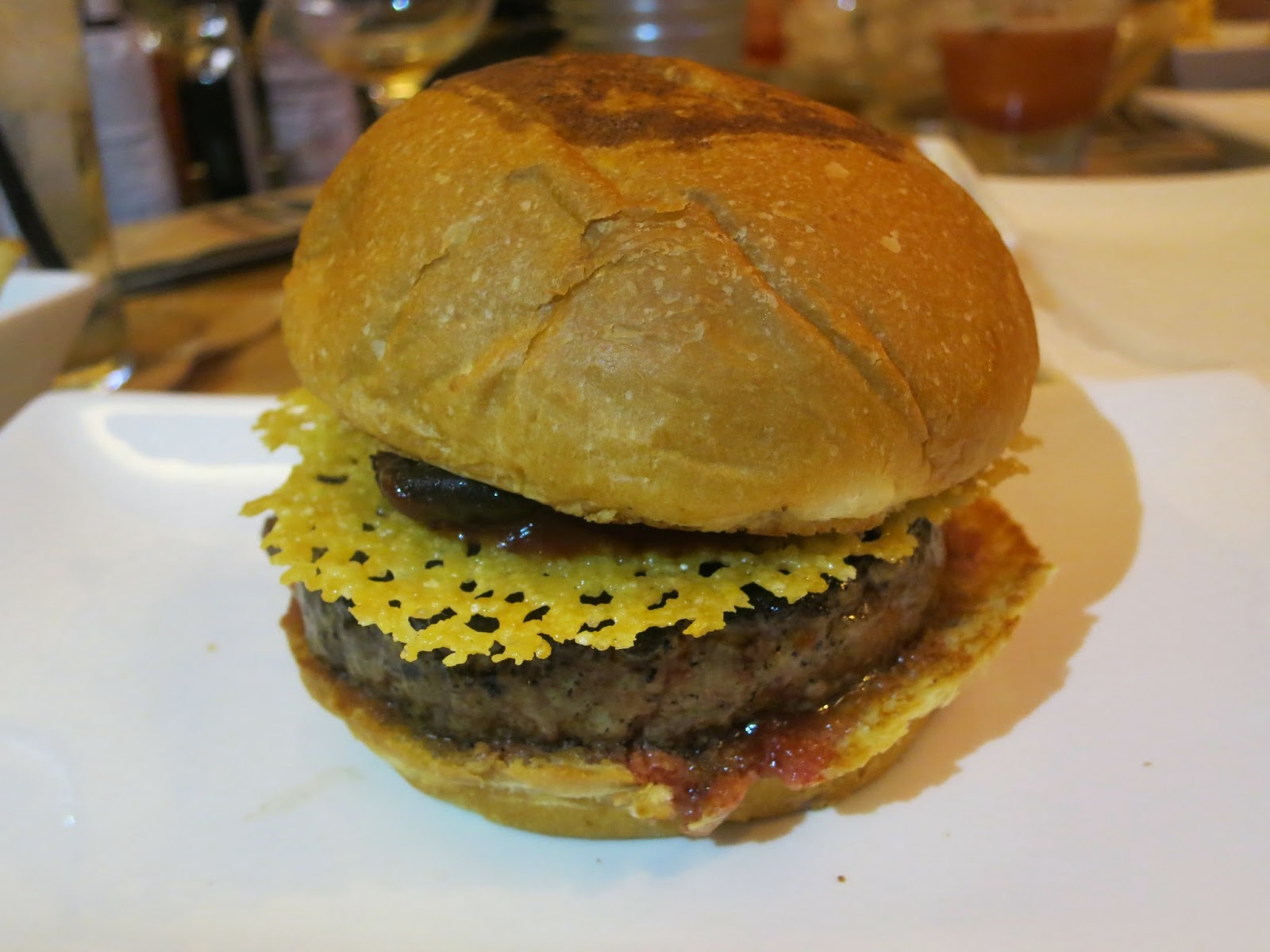 The Original from Umami Burger

Now I'm the first to give places time as far as getting their stuff together and I think a couple weeks was more than enough to get their burgers prepared and then cooked to the customers desired temperature. I was right. I asked for medium rare and it came medium rare. I was happy about that. I knew before ordering this might not be my style as I'm not fond of roasted tomatoes on my burgers, I don't get them with ketchup either but I wanted to try the one that made them famous. Unfortunately this tasted too much like a pizza burger which I'm not fond of unless they're made with an Italian sausage patty. Ironically the original had flavor profiles I would expect to find in their Calabrese. I didn't hate it but I would order one of the other ones next time should I make it back. I'm not anti that but the two burgers, two sides and three cocktails came to $72 and change so this isn't a place I'll be a regular at. After all Chicago is the heart of the Midwest and we corn folk know a thing or two about fresh ground meat between a bun. Oh and speaking of buns, I thought theirs were pretty dang good, even with the corny U stamped onto them. Welcome to Chicago. 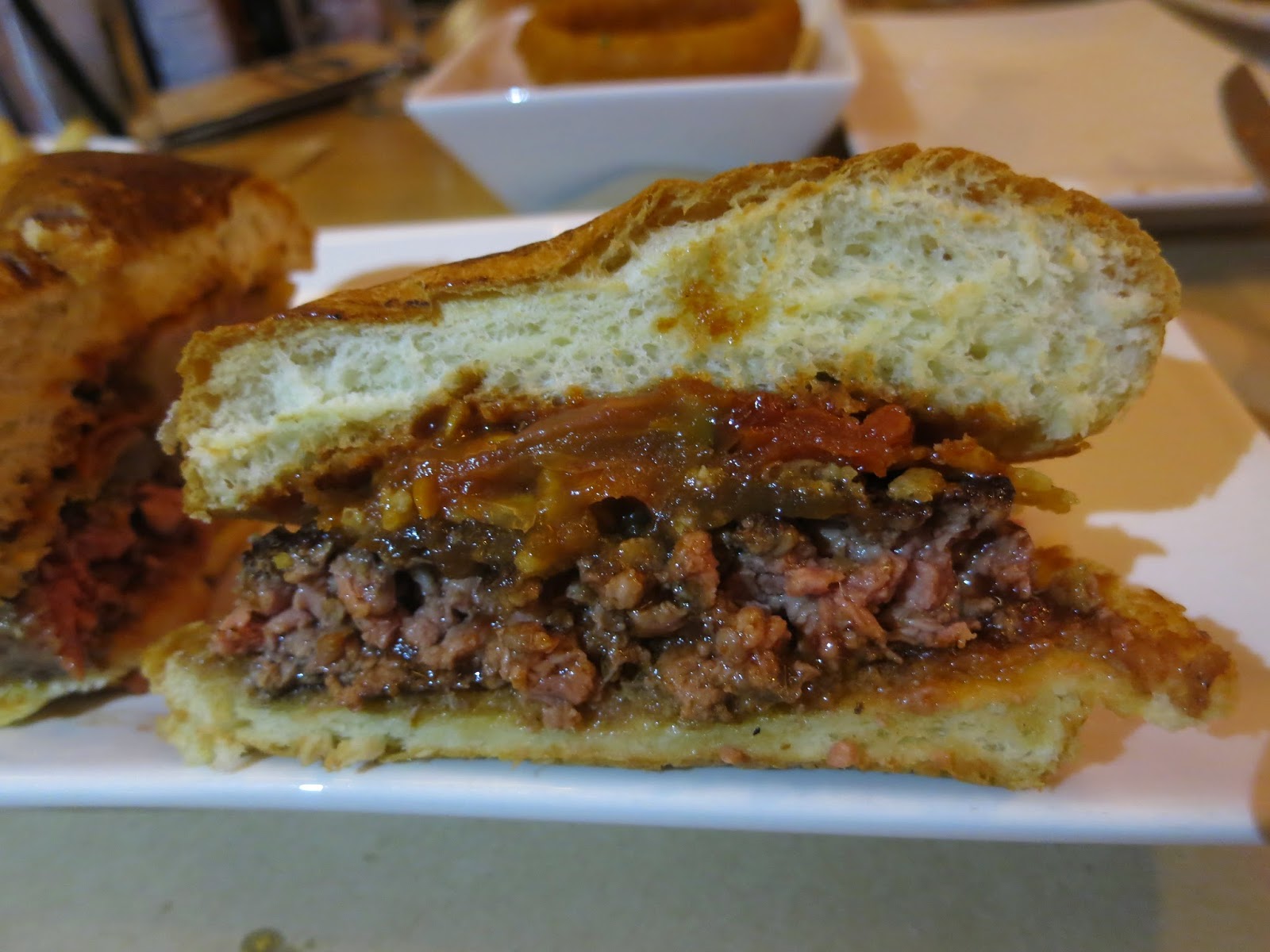