In case you didn't know, I've been eating lots of tacos lately. With it I want to present yet another new series of posts coming to S'C'&C. Introducing 'Taco Pockets' - stretches of a block or two in the cityscape with more than a few good taco options. Today we head to a part of Chicago rarely seen by those not from here. Actually the same goes for many who do reside in the city. The East Side of Chicago sits in it's own little part of the cities landscape. Most people see it driving over 106th street while taking the Chicago Skyway in or out of the city. What you also see when taking that route is the last of the industrial areas which goes by "Da Region" amongst locals. You can check out a taco report I did on the old school Mexican-American restaurants of Northwest Indiana HERE. But today we're going to stay on the Chicago side of the border and check out the taco trail along 106th street which is basically the last line between the city and the state of Indiana. 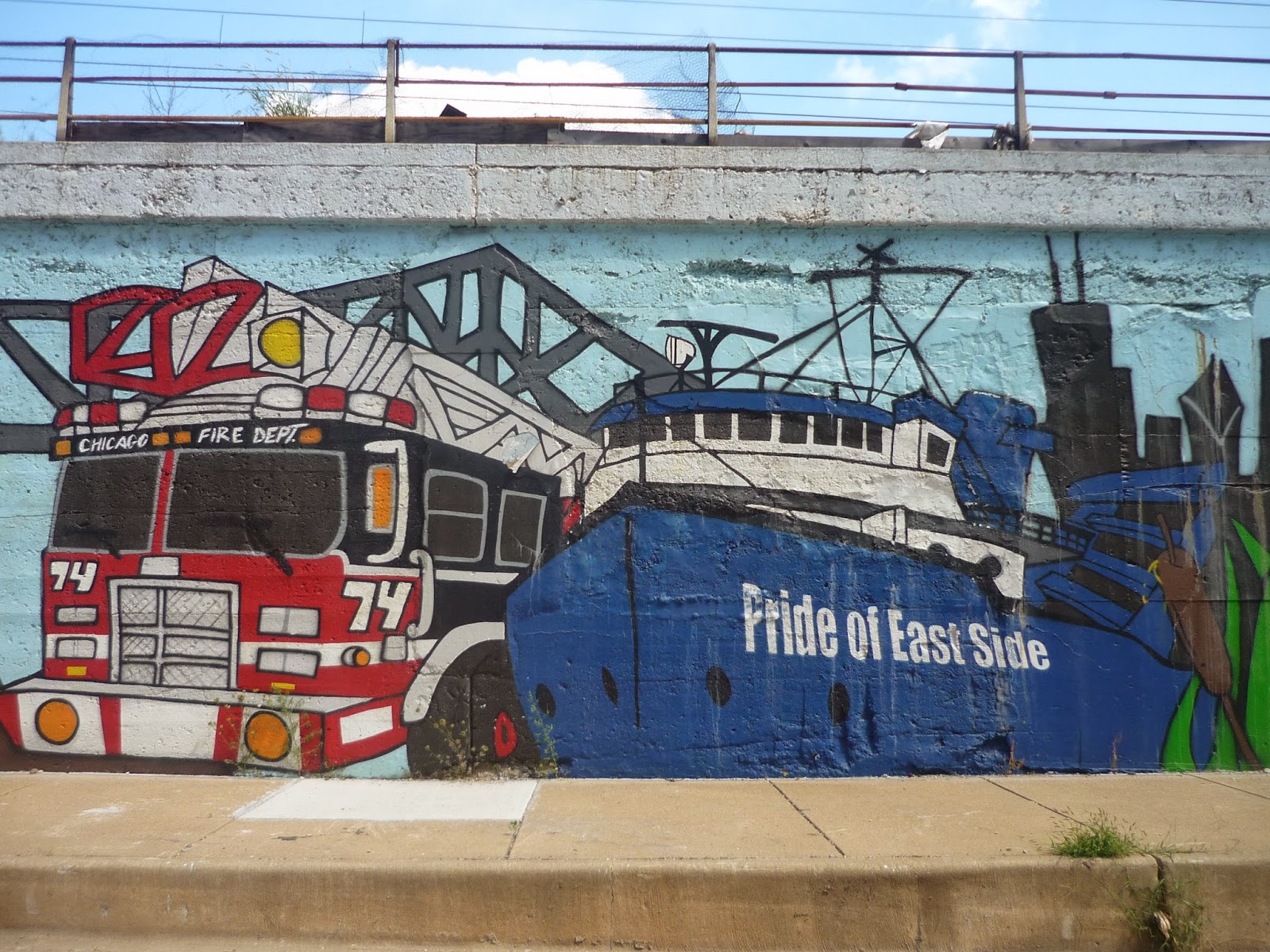 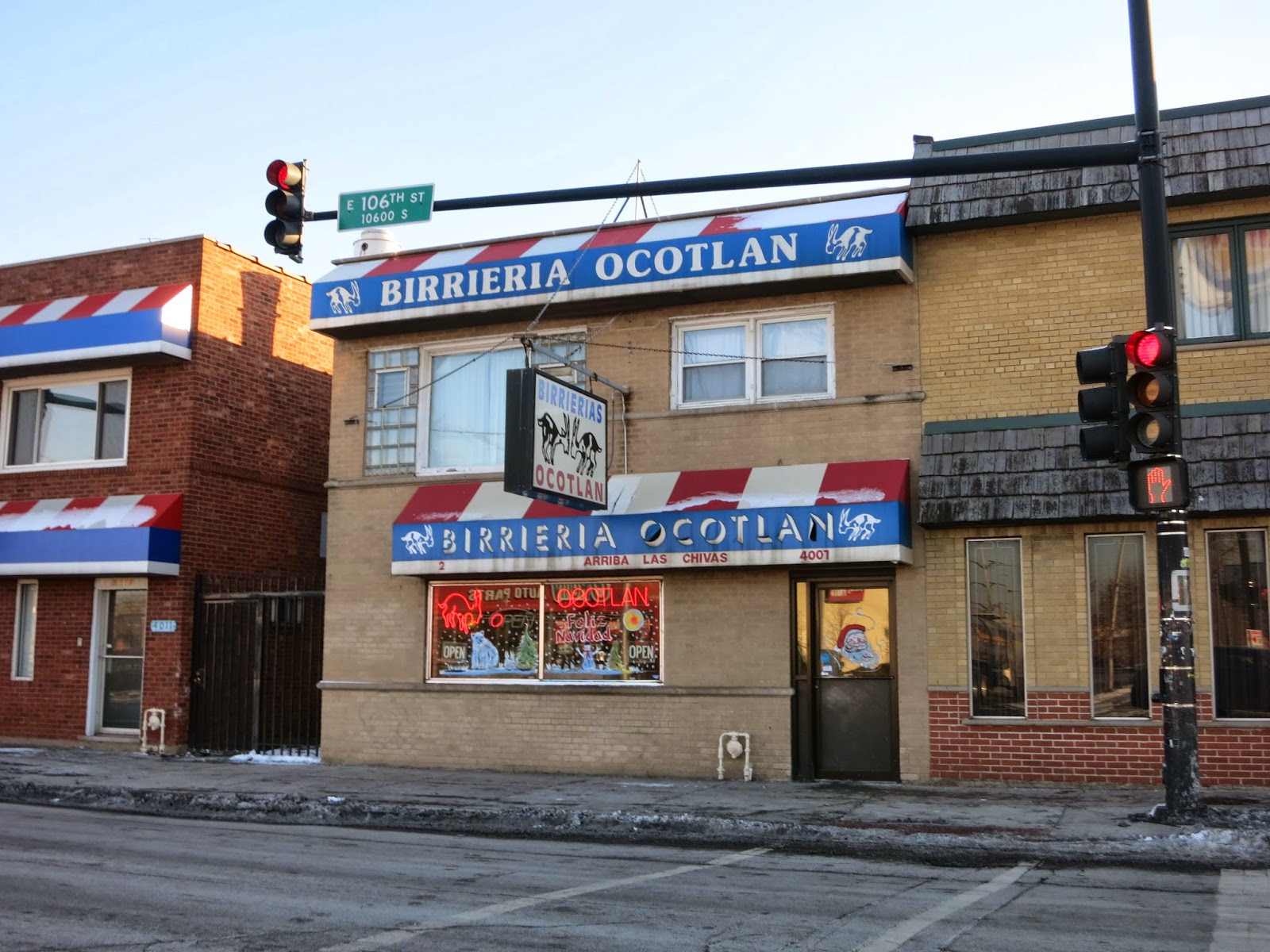 One of a couple locations

We'll start off by going West down 106th. The first stop is Birrieria Ocotlan on the 4000 block. This place specializes in you guessed it...goat. We're lucky to have as many places in the city serving birrieria as it makes for a really nice snack on a cold winter day. The menu here here is pretty damn simple - tacos and soup. Unfortunately they don't make their own tortillas, which can result in the tacos falling apart as you near finish. But they make up for that with properly spiced shredded goat topped with an excellent homemade hot green salsa. A couple of these after a day of working outside at the refinery factories is a good way to get warm again. 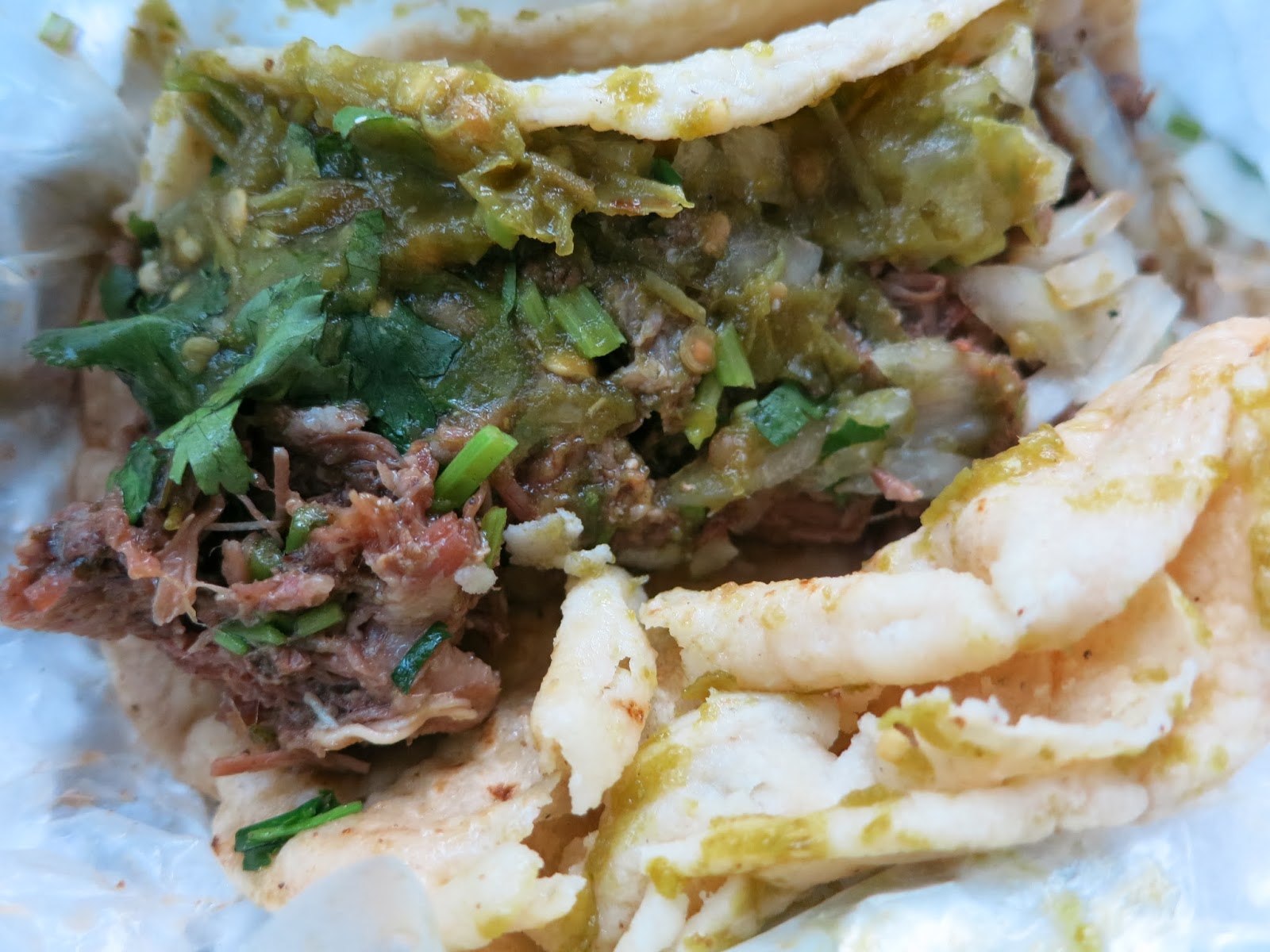 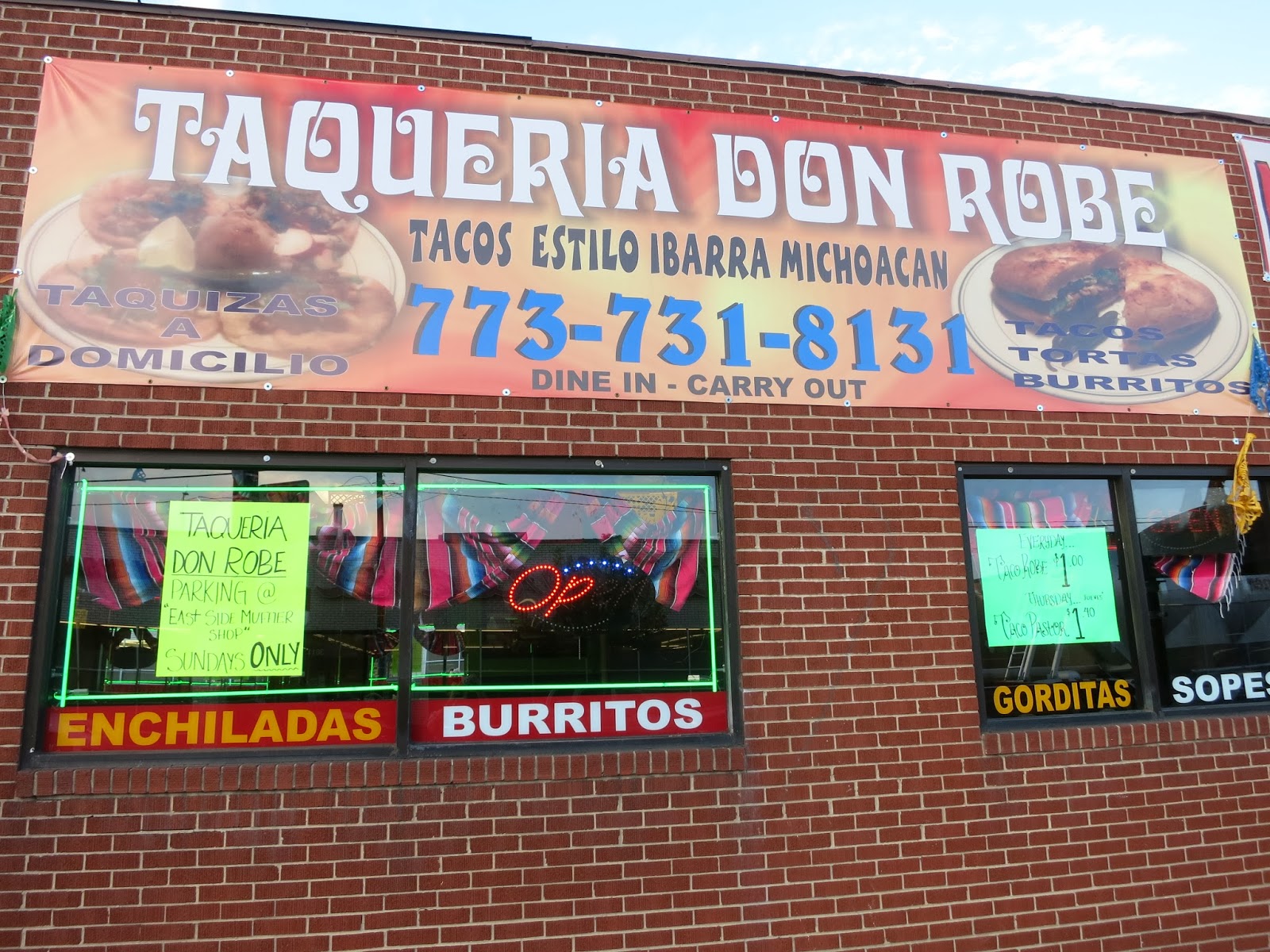 Opened within the last year or so

Continuing West on our stroll we'll pass Taqueria Don Robe on the Northside of the street a few blocks down. This place opened within the last year and caught my eye with their handwritten signs advertising "Tacos Don Robe" for $1. So I stopped in one day and decided to try a couple of those as well as a fish taco. The friendly folks got to work on them and I was good to go. The fish taco was pretty good, nothing special but something I'd eat if it we're my neighborhood taqueria. The 'tacos don robe' we're pretty damn tasty. Chunks of adobado are sauteed with grilled onions and topped with cabbage slaw and cilantro. The spicy pork was cooled down with the fresh topping options. I'd eat them often if were closer to me. No need for a McDouble and fries when you got these little guys. 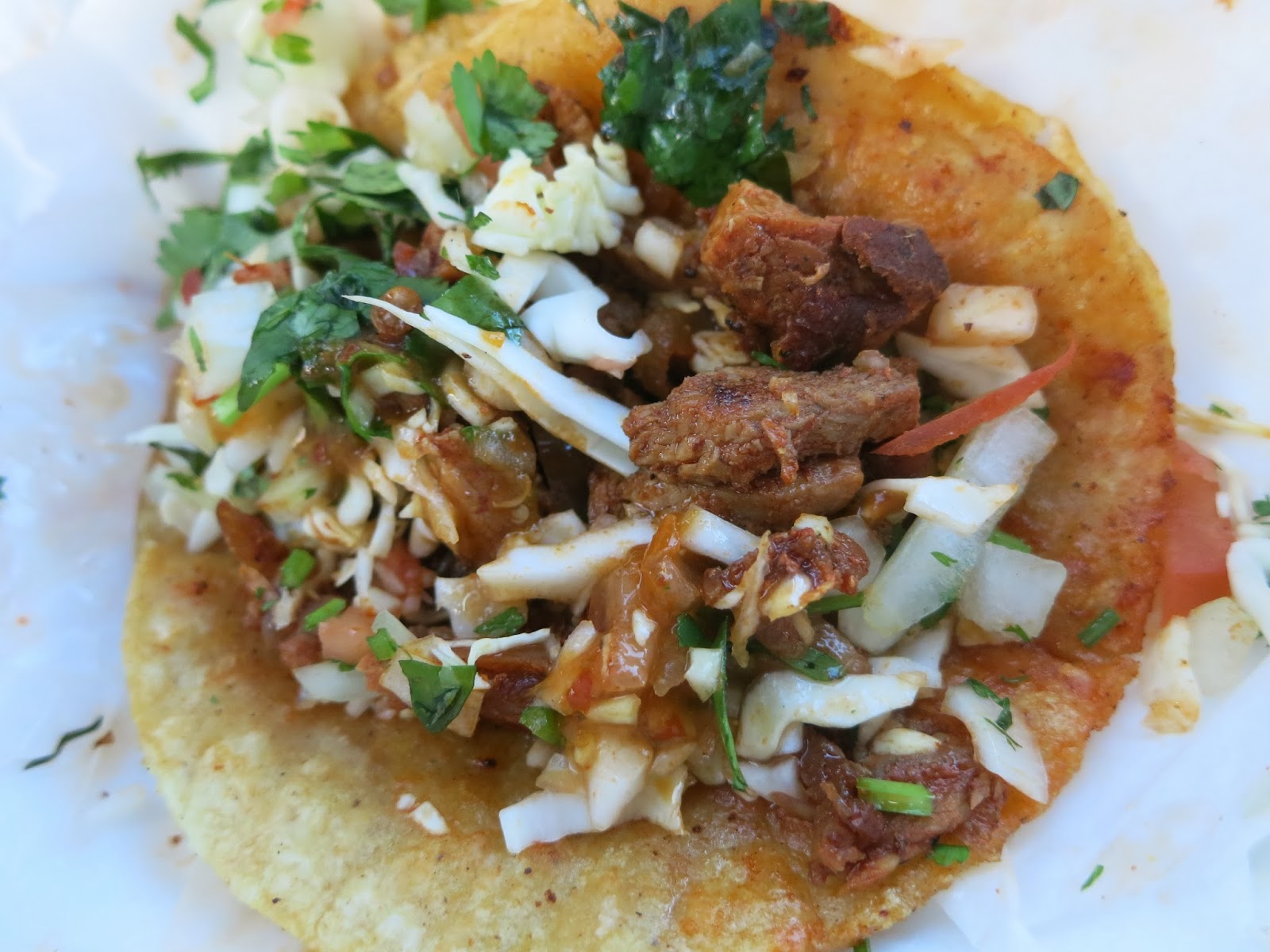 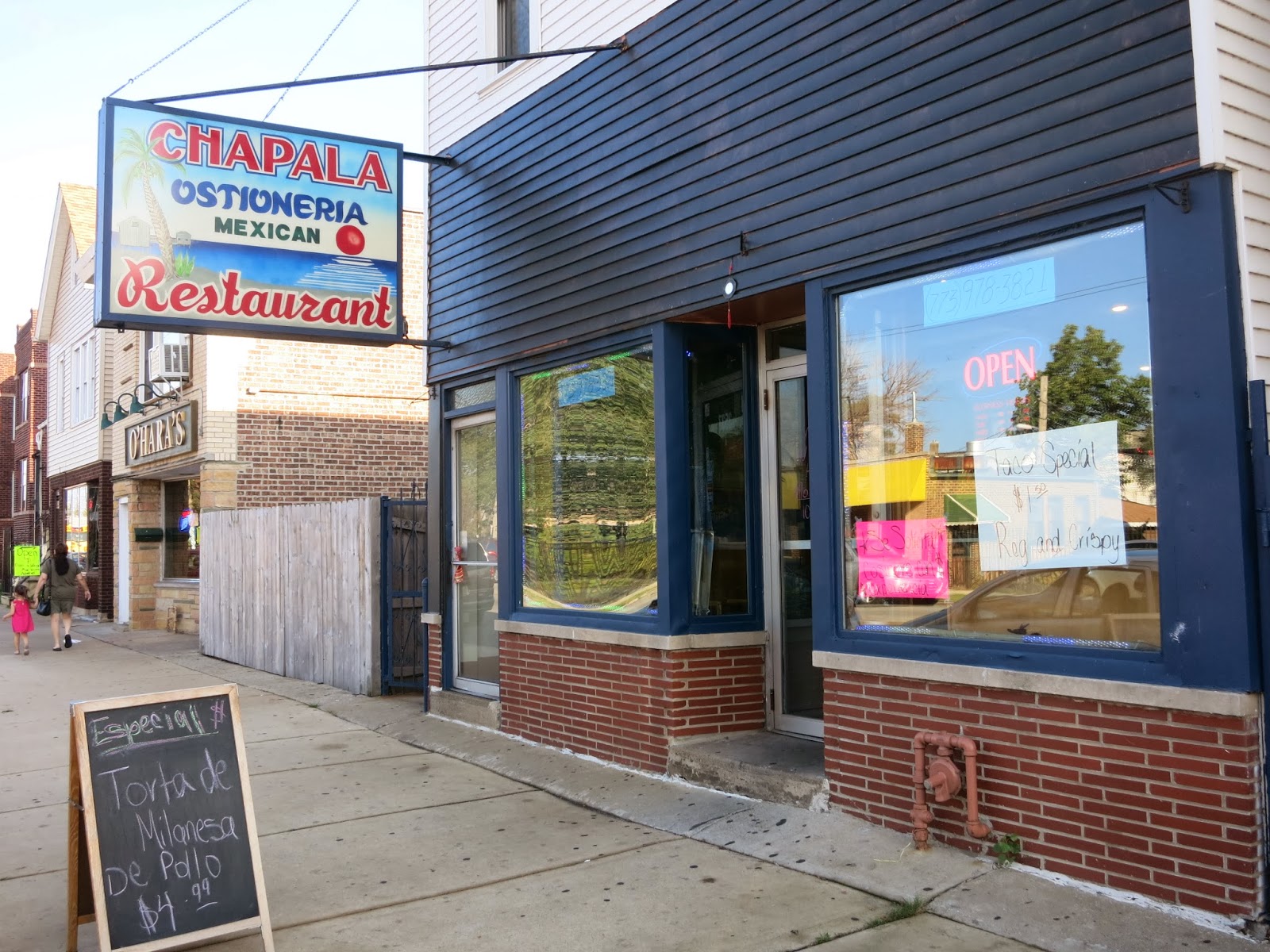 Next up is a place that caught my eye with the hand written advertisement of regular or crispy tacos for $1.25 each. As mentioned we're not far from NW Indiana here which is where the deep fried taco continues to live on. Research and stories told tell me crispy fried tacos have been big around the Region for a while now, at least back to the early 60's. It makes sense because what was said to be Chicago's oldest Mexican restaurant (RIP) featured this style of taco and was located around this way. The meat goes into the tortilla which is held together with toothpicks while they take a trip to the deep fryer. Toppings go on after. Usually you'll see ground beef and maybe chicken on offer for this style  but they'll do whatever taco fillings they offer here. That said, steak gets too tough when fried so ground beef will always be the best way to go when it comes to making them this way. These pretty ladies were as good as they look, even with the bottled red cholula sauce on top. 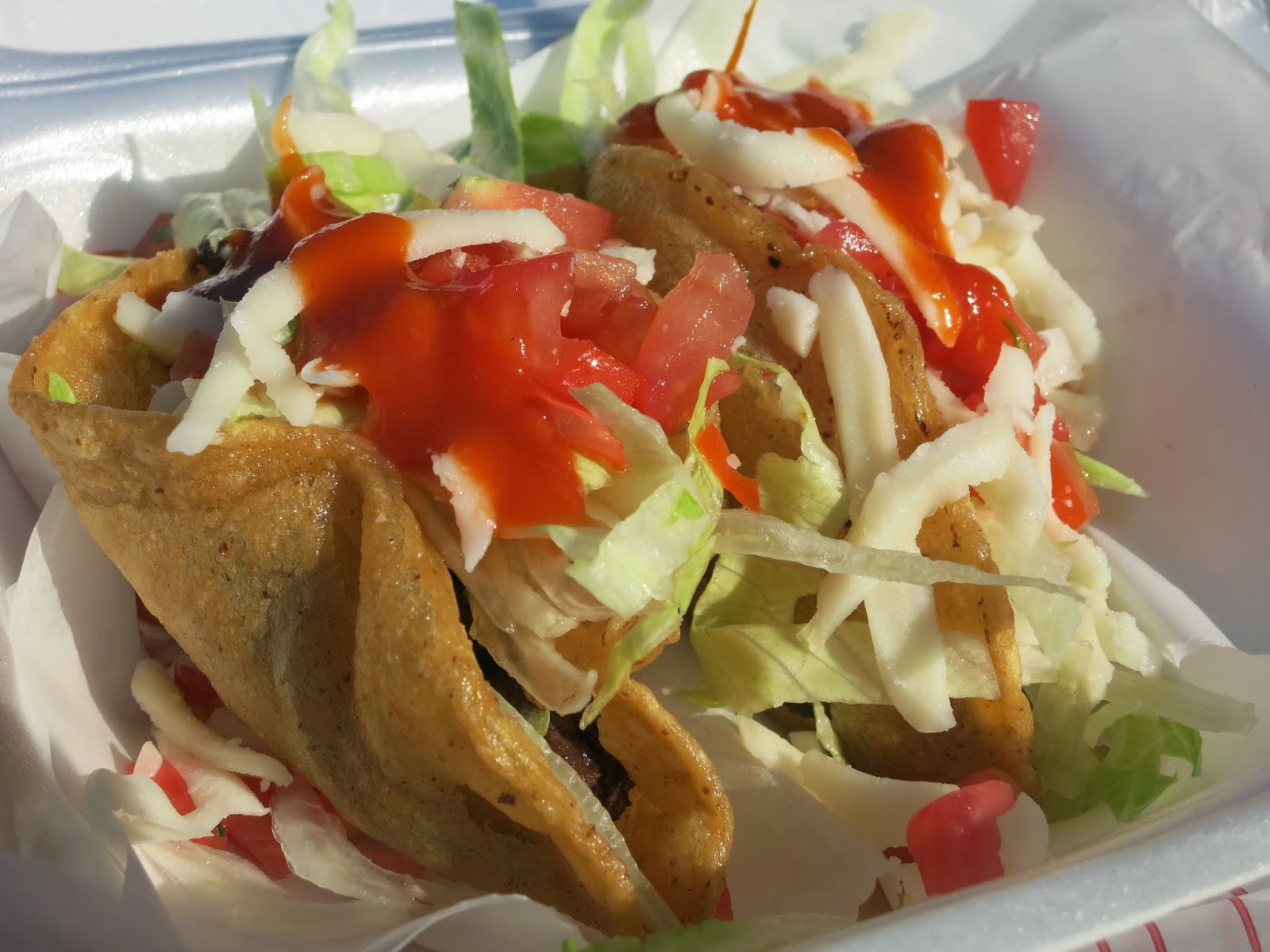 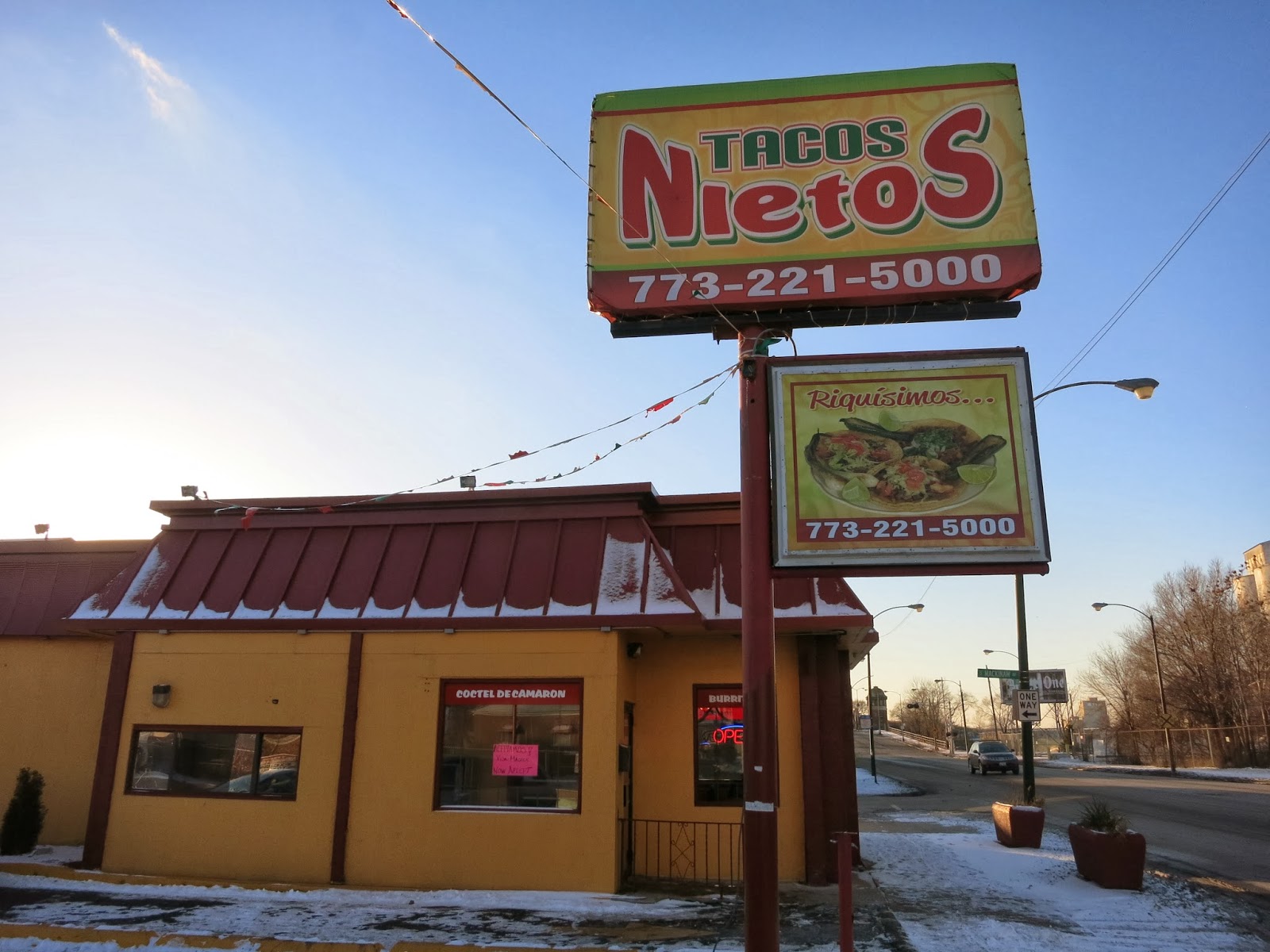 2nd location of a popular stop

Walking further west we'll come across a newer spot housed in an old fast food joint. However the name is not new. Tacos Nietos has an original location attached to a gas station on 95th street. Al Pastor spit was in motion at this ocation upon entry and we were greeted with freshly fried chips and a few salsa options with it. I decided to try an al pastor as well as a lomo (ribeye). There's certain little things done by taqueria that can take their tacos from the middle of the pack to front runners and they like to do those things here. Tortillas were properly warmed and plates came with grilled onions and jalapenos too. The al pastor was tasty and above average on this visit but my go to taco from here from now on will be the lomo. The thinly pounded ribeye steak was as tender of a piece as I've had from a taco shop, no resistance whatsoever. Topped with chopped potent cilantro as well as freshly diced onions this was a very satisfying lunch plate. In a city with as many taco options as Chicago it says alot when you stop back at a place that has nothing to do with convenience and that's what I plan to do. 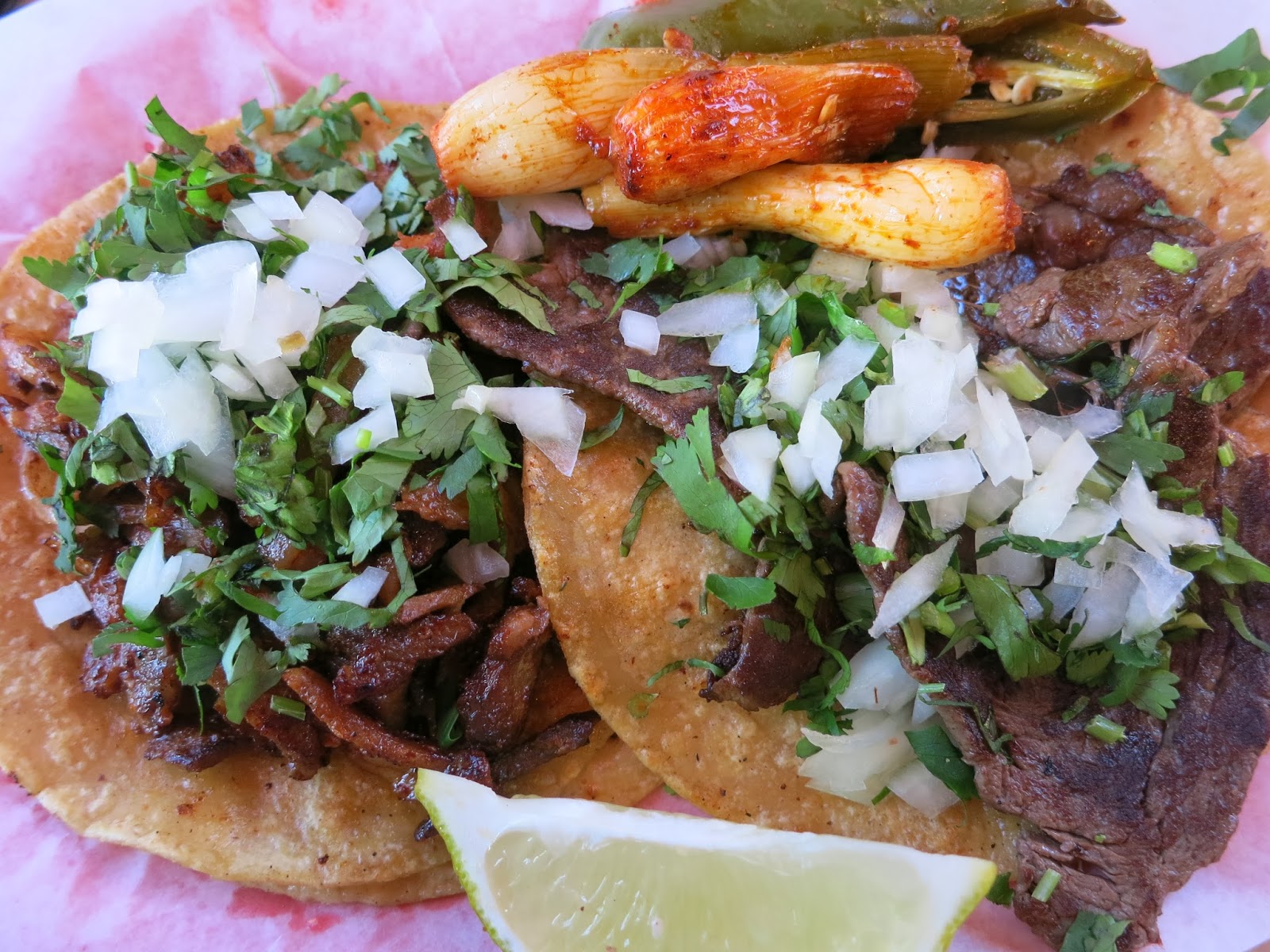 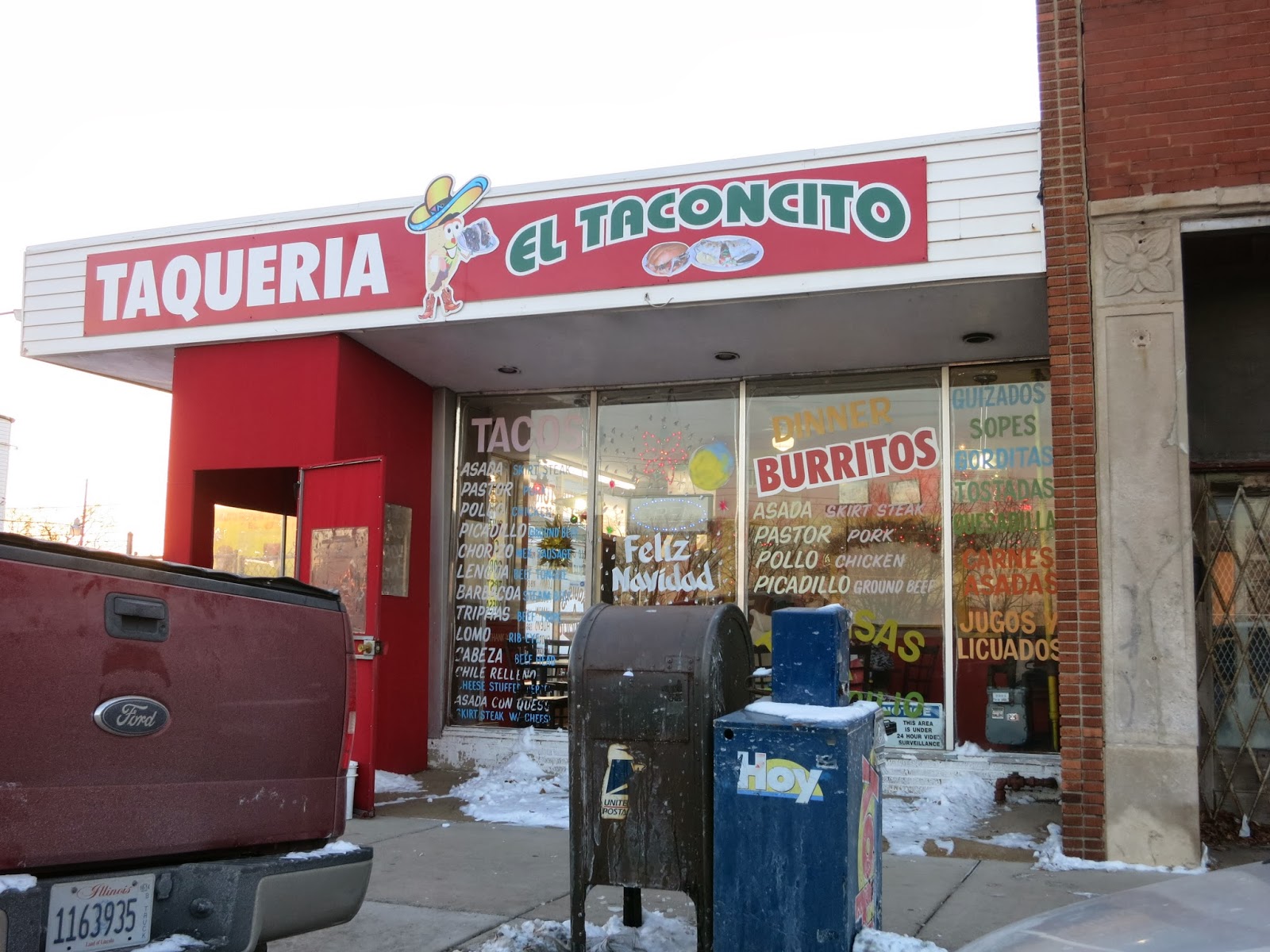 Once you hit the end of 106th street, if you take a right on Torrence, El Taconcito will shortly appear. I've passed it by many times and decided to stop in and make it the final stop on this tour after being turned off by another spot I was planning on featuring. I went in not expecting to find a trompo in motion but there it was so I had no choice but to try one. In Chicago many spots cut the cooked meat off the spit and finish crisping it on a flattop. Not something I'm a fan of but I don't think doing so guarantees a bad taco. I'd use these here as an example of why. If you're going to finish the meat this way you might as well throw some sliced onion on there with it which is what they do here. The cone is heavily spiced and the meat used definitely isn't lean so eat these carefully. As long as you don't ruin a newly bought shirt with red drippings you should enjoy them as much I did. 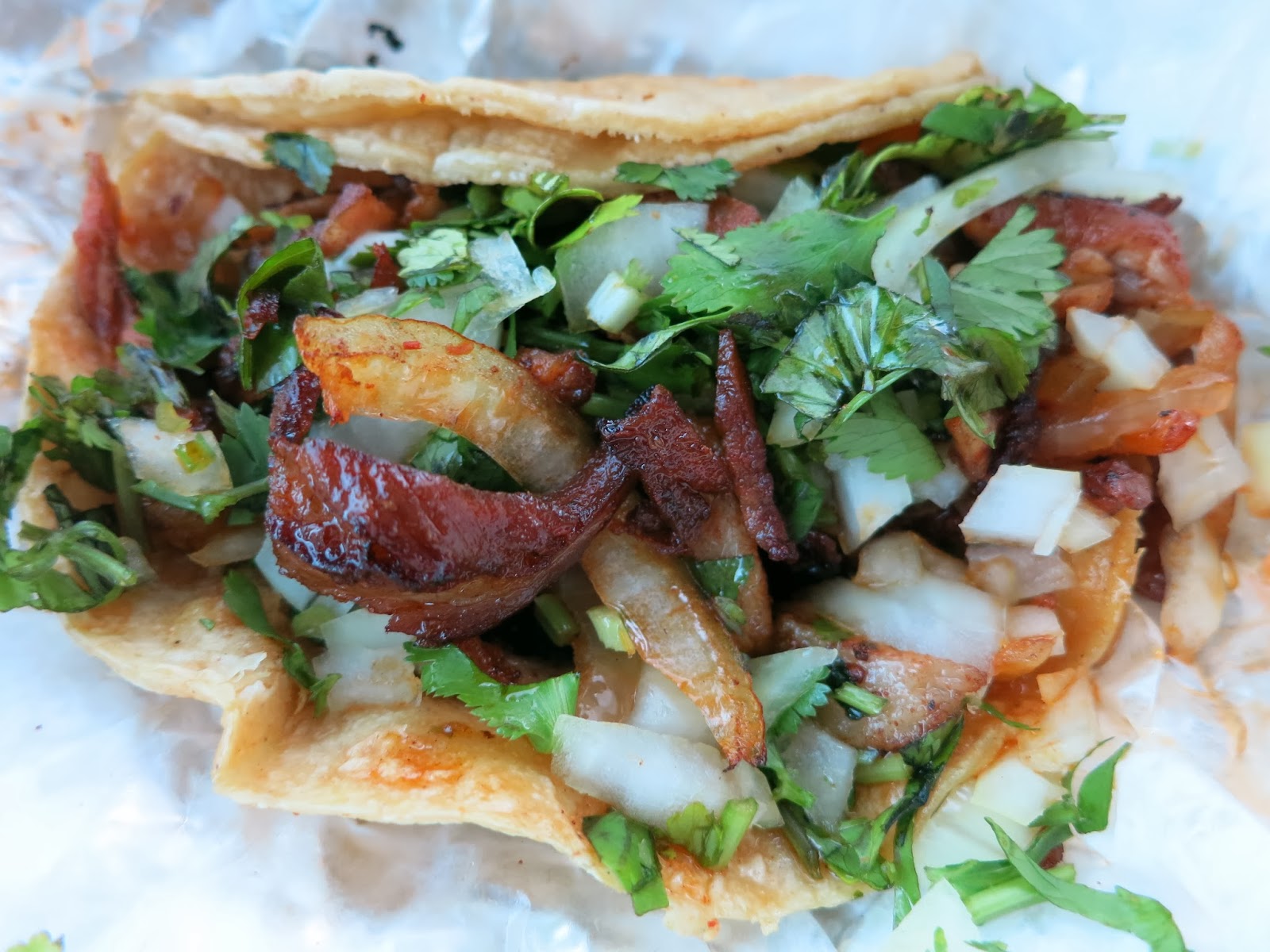 Nice post with a good run down of the east side's best tacos. Taco Mex on 107th and Torrence was closed but appears to be open again; if it is open their tacos de carnitas on weekends are definitely worth a visit. They have another location in Highland, IN that also sells them.

There is shocking news in the sports betting world.

It has been said that every bettor must watch this,

Watch this now or quit placing bets on sports...