Fiesta Month rolls into Northwest Indiana where we've covered alot of ground as is. I'm starting to gather having read and heard from enough people that used to live on the Eastside of Chicago and in Da Region area that deep fried tacos used to be a popular thing around there. I've been tipped that there's some great ones to be had at the Mexican Pride festival in East Chicago every year and look forward to trying those. 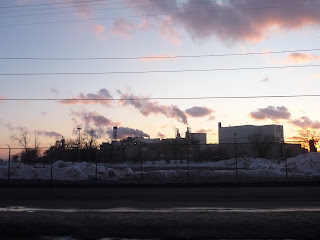 Here's what else I've found in my Northwest Indiana 1970's style American-Mexican restaurant round-up. First up I noticed that quite a few bars in the area offer "hard" tacos. I decided to try one at Chuck and Irene's in Hammond one day and ended up with a hard shell chicken taco similar to something you were served at your high school cafeteria. Something anyone with chicken, store bought hard shell tacos, seasoning, lettuce, tomato and cheese could make. 
If you're just driving by Adrians you probably wouldn't look twice. It looks like pretty much every other sit down restaurant in the area from the outside and it's got the looks and feel of a NW Indiana restaurant on the inside. Adrians is a bar first. I think a good chunk of their business comes from that. As you enter you're greeted by a swinging wooden door like you'd find at on old Wild West bar. On there is a note making sure you know that unless you're 21 you are not to enter. Over to the side in the other room next door is a family dining area that hasn't changed since the 70's. I was tipped off on here buy someone I know from Horseshoe who said it's one of his favorite places to eat and drink at when he gets off. Like the decor in the dining room the menu seems to be the same as you'd find at a 1970's restaurant. Think Pepe's or Chi-Chi's as if an old timer who just likes to cook good homestyle food his way was running the place. The tipper along with the freindly waitress who I'm sure has been working there since the 70's both rec'd the nachos as being very popular. So we tried those. This big ass plate pictured above was $10 and came loaded with shredded chicken (choice of meat) and beans underneath all that cheese. We couldn't finish the whole thing despite trying. The drinks are cheap and the margarita wasn't half bad considering. But the reason I was there was because he told me they have some great deep fried tacos like those at Loncar's. Available everyday for $2 each these were as big as theirs but stuffed with a wetter more seasoned blend of ground beef. Good although not quite up to par with the other guys across the border. There's just something about that hot sauce. I've driven past this place countless times over the years and had read some good things about their steak tacos online. I dont know how long they've been around but this place is old school. It's actually quite beautiful inside. It almost feels like you're in a church. A few Mexican families were dining there on a weekday afternoon so I'd guess it gets packed on the weekends. No deep fried tacos here like I went in looking for so instead I opted for the "huge" steak taco they serve that was getting praise from others online. They asked if I wanted flour or corn and most mentions were for the flour which folks said was filled with meat. That it was, but the quality of the meat was probably just a 7 out of 10 but it was spiced in a rather unique way. The meat was quite juicy and not as dry as it looks. It was ok. I doubt the urge for one will ever hit me again though. The search for a deep fried "hard" shell taco like that at Adrian's in East Chicago continues at Plaza Garibaldi where they, like Adrian's, have a "hard shell taco" on the menu. No mention of a deep fried and I didn't ask because that's part of the fun. I didn't know what to expect. It had the cheap thrill of a scratch off ticket. Loser. Again just a pre-made hard shell filled with ground beef and topped with lettuce, tomatoes and cheese. Those that love them some Ortega Taco kit tacos for dinner would like these. This place has the atmosphere down pat. I grew up loving Mexican food. Long gone places like Lindo Mexico on Lincoln off Wrightwood and La Canasta on Webster were frequented by my family and others from the area. The inside of El Taco Real felt like those old time places. A little pond with a tiny waterfall along with lots of families and couples here for what looked like their weekly dinner at the place. The food though? Meh. Not how I remember Lindo Mexico to be. They serve "hard" tacos so I got one of those and an enchilada as tasters. Another scratch card, another loser. I dont mean too sound too harsh I just mean in terms of the deep fried taco search. None here and nothing special as far as the generic hard shell taco and enchilada goes. Fans of the now shuttered shuttered Mexican Inn on the Eastside rejoice! Taco Trader was opened by a family member from the folks who ran the Mexican Inn at 95th and Ewing. The menu is pretty simple and two favorites remain. Their signature deep fried tacos are available (with your choice of filling) as are their soft cheese tacos. I think the deep fried guys here were even better than they were there. Or maybe I was just a little too happy to have finally found a worthy one. Just $5 for three. I'm glad this place isnt closer to me. Not sure I'd be here in five years if it were. Alright throw all the spots we've just been too out the window. Despite the fact it sits in a strip mall down a not so busy street, Memo's is different. It's authentic. Another winner LTH has led me too. I doubt I ever would of known without it. This place is great. It's a family run business with some great people taking care of you. I always thought the Molletes on their menu were their own creation but I guess this is a popular dish at family dinner tables around Mexico. Memo's makes theirs with toasted garlic Texas sized toast with a smear of refried beans topped with guacamole, roasted red peppers and cheese. These are sure to please folks from all walks of life. Also listed on their menu is a section of "Tacos Dorados" which you know I'm all over. Do not miss their shrimp taco dorado. They're on any "best tacos in Chicagoland" list I'm asked to make. The shrimp dorados are addictive with the mango habenero salsa served on the side and a little pinch of slaw put into the open area on top. The shrimp go in a corn tortilla and they hold it shut with tongs while deep frying it for a few minutes. Crunchy outside and excellent tasting insides. They have a few specialty tacos incl. the campechana with skirt steak (always quality) along with chorizo and cilantro and red onions. Very good as are the mahi mahi tacos available on Friday only. The taquito's appetizer is basically alambres served in mini corn tortillas. Skirt Steak, bacon, green peppers, onions, and cheese? Yes please. They also do breakfast as well as specials on weekends. Items like pozole, carnitas and cochinita pibil. Carne en su Jugo on the menu too. Then there's the Pancha. This is great. They take a big fresh flour tortilla and fill it with skirt steak, refried beans, green peppers, onions and cheese and then cook it on the flattop basted with red enchilada sauce. So it's basically a burrito, enchilada, and fajitas all rolled into one. Served with housemade guac and sour cream on the side. At $10 it makes for two meals for me and that's saying something, I eat well. All of their salsas are made in house and each one is top notch. This is a place that could easily hang in the city. I would be there often if it was nearer. Actually I think they used to have a place on Torrence. Fill up on gas while there and it's worth the ride. Great place to eat. Maria's Buena Cocina in Highland is my favorite Mexican restaurant. It's a family-owned business, and the owners are wonderful people. The Farmers Market Steak Tacos are fantastic! Check it out...

Talk about great food! It’s amazing how you traveled across borders to indulge yourselves in these goodies. But then again, Mexican food are really delicious, that they’re worth traveling those miles for. Here’s to more years of food and adventure!

This blog was... how do I say it? Relevant!! Finally, I have found something that helped me. Thanks!If someone wants to taste best fast Mexican food in Vegas then zabas will be the perfect place for you.
http://zabas.com