When I explain to others who ask "Why?" when saying Mexican food is one of Chicago's strong points I like to give example of the fact we have food from all over Mexico and it's featured in both the classic no frills taqueria and also at places a step above those like Xoco. Rick Bayless has done alot for Mexican food and has to be considered one of the great brand ambassadors for it. He deserves the recognition he has gotten which is more than I can say for his brother Skip. Xoco is his Mexican Street Food inspired spot located right down the door from his pioneer place Frontera and his high end Mexican dining spot Topolobampo next to that in River North. Along with Torta's Frontera at O'Hare they make up his mini empire. 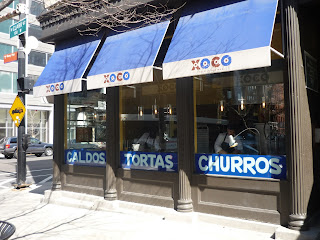 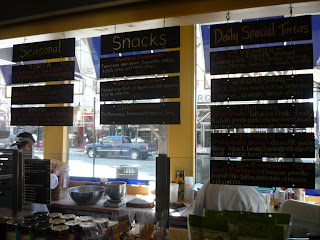 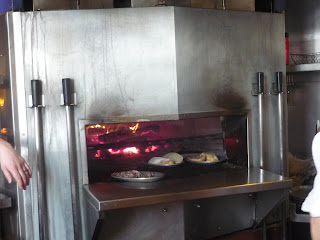 The menu at Xoco isnt big but some of the stuff on it puts out some of the big bold flavors they claim. Unfortunately I cant say their seafood caldo is one of them. I was expecting much better because that's what I usually get at places like Tortas Frontera O'Hare where you'll inhale some great Mexican style sandwiches. At an airport of all places. Xoco does real tacos al pastor on Wed. nights and I'd always hoped Mr. Bayless would serve a dish with his take on Carne en su Jugo. If they we're going to serve it here they need to step the broth game up big time. Just a couple shrimps in it but my biggest complaint is the broth, way too weak. 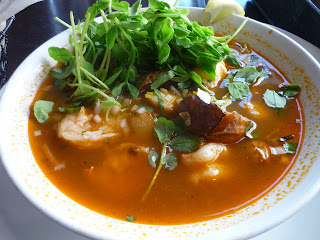 The aforementioned tortas that people get to the airport early for are also available at Xoco. I think there may be a few different selections at each place but I find them both very good options. Since this is a step up from the street food you'd find at Maxwell Street Market so is the price. But I can justify the $12 average price-tag on them because they're very good.Worth treating yourself too for lunch. 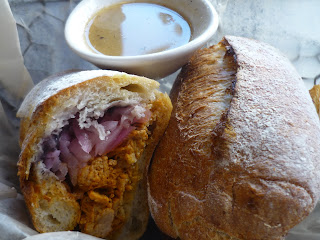 Seen in the first set of pics is the wood fire grill which they use to toast the bread here. It's really fantastic stuff as are the ingredients they put in it. Cochinita Pibil is a slow roasted pig dish popular in the Yucatan state of Mexico. Rick and staff use wood roasted suckling pig for this version with achiote, black beans, pickled red onions and a spicy habenero salsa rounding it out. It's a great sandwich. I gotta give them that. 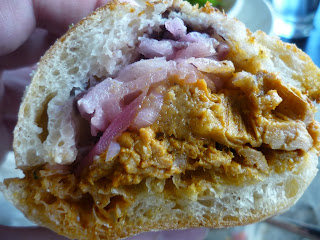 When waiting in line to place your order, which you then sit down and is then brought out to you, it's hard to resist the smell of the fresh churros being fried. The quintessential Mexican street snack is basically a long donut which can sometimes be filled with creme or jelly and usually comes served with a side of melted chocolate for dipping. They do these justice here. So my advice on Xoco? Torta and a Churro and you'll be good to go. 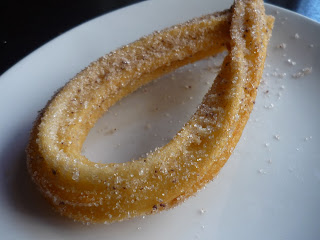 Hey man, my name is Arthur and I am the manager of Xoco, and a fan of your blog. I was inspired by your food writing to go on a Lake Michigan circle tour last July when the chefs were on the annual trip to Mexico. I'm from Connecticut and really appreciate all the eating you've done out here.

It would be great to have you to come back to Xoco and eat on the house. You have to try our signature dish, the torta ahogada, of Guadalajara, which is not featured at O'Hare, and Xoco is also one of the only restaurants in the country to make its own chocolate. And it'd be great to talk food!

Professional trading signals sent to your cell phone every day.