The food world is a fun place. Not only do I really like to eat but I love to explore. Not just food, but neighborhoods, towns, cultures and all the other good stuff to be found in this diverse country we live in. With the internet today there isn't much that hasn't been uncovered but we all know there gems out there waiting to be found. Luckily La Placita de Durango was found a while back over at LTHforum. This is the type of place I seek out and try to share with folks who care. Luckily theres others doing the same. 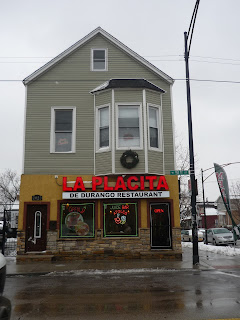 It took me a while to get over here despite having known about it for a couple years. Luckily world class food explorer Mike Sula wrote it up in the Reader re-triggering my want to go. La Placita specializes in cuisine from the state of Durango located in Northwest Mexico. It's cowboy land there and their dishes reflect that lifestyle. I love hunting down places offering different regional variations of Mexican food and this place is the perfect example of why. 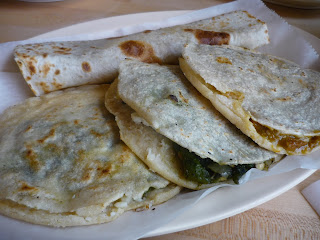 Many purists will tell you that burritos are a product of Mexican-American cooking. They are if they include big store bought flour tortillas filled with lettuce, tomato and sour cream. But tell the folks of the Norteno region they arent authentic the way they do them down there. Housemade harina tortillas smaller than your average ones get stuffed with wonderful fillings such as deshambra (shredded beef) and chile pasado (dried poblano peppers). Gorditas are filled with Mexican cheeses less common than chihuahua and cactus too. 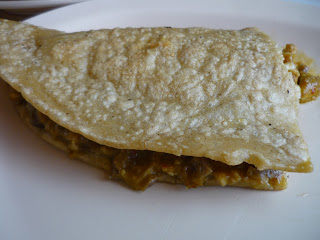 Half of a Quesadilla

Then there's the quesadillas stuffed with chicharron prensado. Sula describes them as "shaved from loaves of pressed pork skin, and reconstituted in a creamy, fatty sauce with a hint of something like mustard." While the heartburn from this was big time, so were the flavors inside. The food served here is the type to keep a Cowboy going until the day is over. 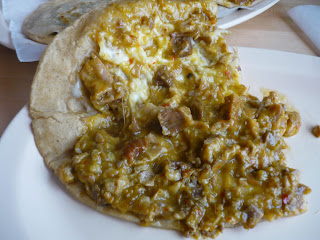 Specialty of the house might be their "Beef Jerky Soup". Called caldillo de carne seca it's made with dried beef and packs a pretty heavy punch when consumed. Joining the carne seca are potatoes, cactus and onions sitting in a dark green broth that obviously has some fat in it. 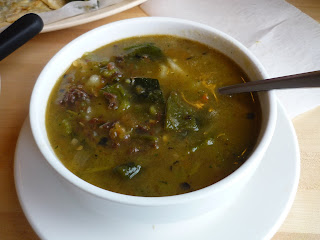 One taste and I was hooked on this cold winter day. It was this trip here that made me realize theres more to be found out there, not everything has been uncovered and the places that have, they might be doing something new so dont just forget about it and move on to the next spot. You never know what you might be missing if you do. I'm starting to further explore the Mexican spots in Chicago away from the popular neighborhoods and know I'm going to find something good that hasn't been uncovered. Do stay tuned. 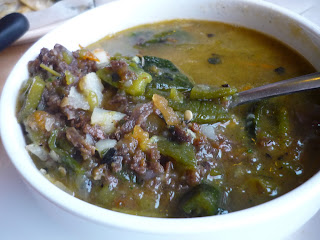