Cruisin' Across America
-The Mighty Mississippi thru MN and Iowa

Last summer my trip along the Great River Road thru WI captivated me so much I knew I would be back traveling along the river taking in the sites, culture and of course, food. So when we pushed into Minnesota from South Dakota I looked at the map and said screw it, we're going to drive to the Mighty 'Mississip' from Rochester, MN and ride from MN down into Iowa and then over to Illinois and back to Chicago and that's just what we did. We took a byway from Rochester into the pretty little town of Winona, MN which is along the Great River Road. We took the time to head into the Main part of town and take a stroll around and see some of the historic buildings that flood the streets. Winona is also known as the stained glass capitol of the country. Another old fashioned Midwest river city is what we had in here. Behind the historic downtown area were large factory buildings and manufacturing plants most of which were vacated. Although Winona is still the home to a few operating industrial companies. 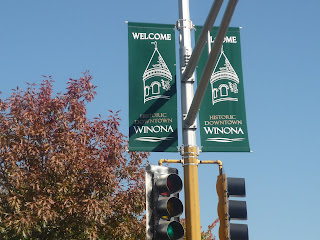 Historic Downtown in Winona, MN along The River Road 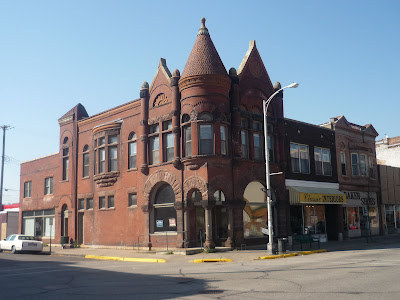 The Saturday morning we stopped into check out the town was a very vibrant one. Winona is the home to a university and people were out enjoying the stunning fall day. I hope to get back here this fall, I think that's the peak time to take a stroll up or down River Road. Winona had the perfect place to start out our day. Bloedow's has been baking up their specialties in Winona since 1924 and I would guess it is the communities most beloved place. The day we visited the line was out the door and it wasn't even peak hours since it was about 1130a, the big rush already came. 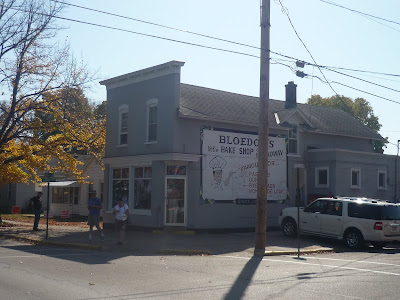 I don't know what it is about MN but this state has the best donut shops around. Before my stop here I have said the best donuts I have had were from a place called "World's Best Donuts" in Grand Marais, MN seen HERE. Well Bloedows is my new heavyweight (what you'll get if you eat too many of 'em) donut Champeen of the Midwest. This place was amazing. I got a bag of 6 donuts and a package of fresh baked hamburger buns and the total was $4.80. The standout for me was the peanut butter long John and the days special, blueberry frosted. My female friend liked the glazed a whole lot. I used the buns the day I was back in town and they were outstanding. 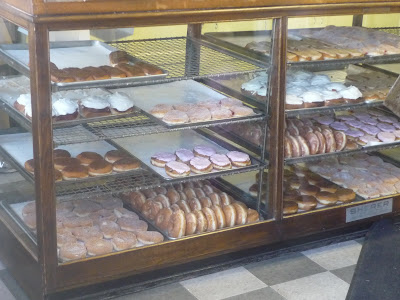 Part of the display case...there's so much more

So after a little treat from the high heavens we were off onto the Great River Road. Nat Geo Traveler Magazine named the drive from MN thru Iowa along River Road "one of 50 drives of a lifetime" they said it's "not only one of the most scenic drives in the country, but one of the culturally richest" and I wholeheartedly agree. I took 100's of pics and I'm trying to find some of the better ones but the best way to see this and experience it is to take the drive. I got a real trip out of the boathouse communities located along the river in parts of both states, imagine if that's where you came from? life would be totally different. 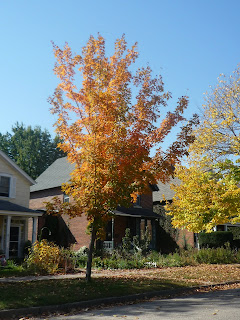 Fall days along the River are stunning 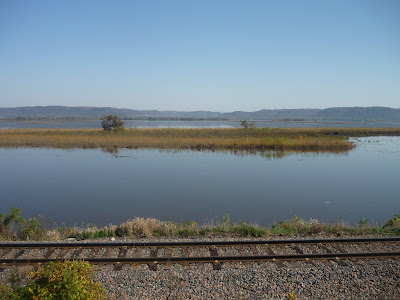 Since we started out in Winona it didn't take all that long to get down into Iowa. One thing I was loving about this drive was how I did virtually the same one the past summer except along the other side of the river thru WI and it was totally different. While they have many similarities and the communities had basically the same lifestyle, the culture and foods and people were different on each side. I cant wait to one day do the entire drive down the river on one side and then the entire drive back up on the other. 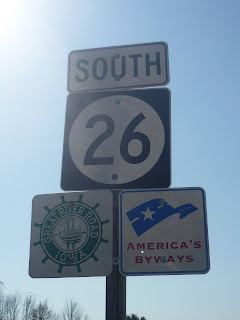 The most beautiful part of the state of Iowa

The whole reason for ending up taking this route home to Chicago had to do from the fact the ride thru middle Iowa to South Dakota was so boring traveling along the main highway with the scenery never changing. Nothing against Iowa but its a pretty boring state when it comes to the views. However Western Iowa and the part of the state along the Mississippi are gorgeous and unlike the rest of the state from my personal experiences. We went along the river into the spectacular natural landscape of hills and farms and towns all nestled into one. 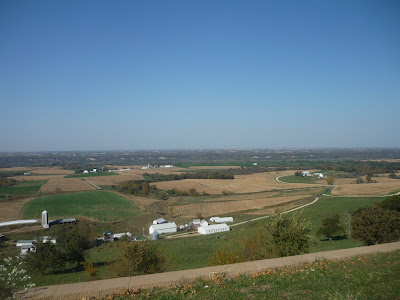 A view along the great River Road in Iowa

I only the had day and its daylight to work with on this trip thru Iowa but I came away very impressed. Pictures are worth 1000 words so here are some of the views from this Fall day along the Great River Road. I stopped and took a ride down the Main street in most of the towns and they really were some classic American communities. Let me reiterate that the Fall is a great time to go. It was a Saturday so these towns were rocking with fairs, festivals and visitors from all over. The bars were flooded and they and the butcher shops were smokin' and grillin' it up all over. Great times to be had.

So many butcher shops and small town meat markets...

The Fall day we took the ride down the road it was 80+ degrees and the bikers and old time cruiser vehicles were out in full force. I'm not sure there's a road in America that has more bikers on it than the Midwest portions of Great River Road. If its a nice day out on the weekend, your going to see packs of them livin' it up.

Classic American made vehicles and bikers are abundant on River Road

At one of the turning points along the road we spied this little mobile cart (seen below) out on top of the hill and I needed a drink and am a sucker for mini donuts at the fair which is what they had. I got a fresh brewed lemonade that was thirst quenching and the donuts, fresh from the fryer were the perfect snack to hold us over until lunch. Did I mention I'm a sucker for chili dogs when in different regions too? It was alright. 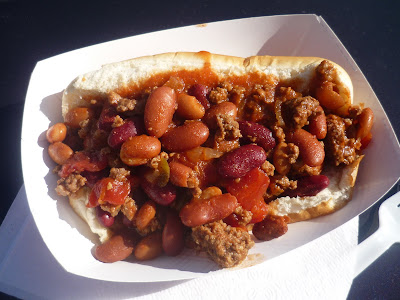 We stopped at the Mississippi Valley overlook and I picked up some apple butter and raspberry jam from the local vendors that were selling their products at the popular scenic overlook. Good stuff indeed. 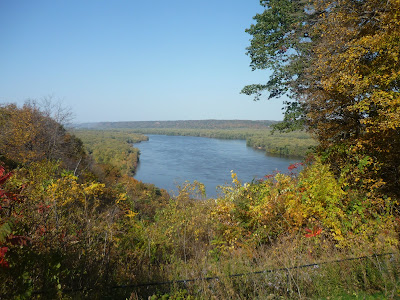 I was keeping my options open as far as where to stop for some food and was glad I did when we rolled into Dubuque County and the tiny little town of Balltown. Its the home to Breitbach's, Iowa's oldest continuously operating restaurant and bar. They've been at it since August 23, 1852. It's been all in the family since its original opening and has burned down to the ground twice in the past decade. The rebuilding of the place (both times) was stellar, as you still get the old country dining/tavern feel (beer garden in the back) except with much nicer up to date surroundings. 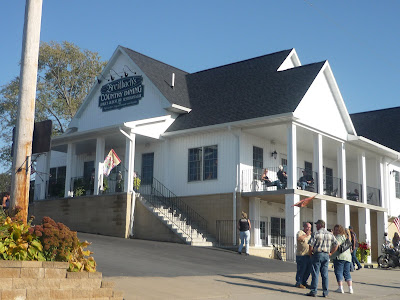 The place was packed when we stopped in as the tiny town of 90 people had its annual Market Days along Main street which attracts vendors with all sorts of things from across the state as well as people. There must have been 2,000+ in town and 250+ at Breitbach's. But that was ok, they had the sheriff patrolling traffic who I heard telling a bike gang "If I wasn't here I'd be out riding the Harley with y'all", plenty of parking and the restaurant is ginormous. 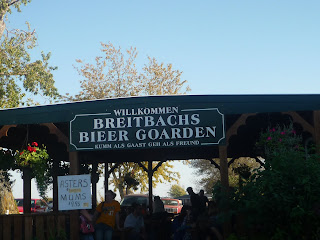 Beer gardens are great on a Fall Day's

We sat at the bar like I always like to do which had plenty of bikers and regulars as well as visitors like myself.. Most of the people there that Saturday were going for the buffet which is the talk of town. The Boulevard beer on tap was as cold as I've had and exactly what I needed. I had a few and started a chat with the older lady next to me. She was from about an hour and a half away and used to go there all the time with her family, she drove up by herself the Saturday we were there for a few beers and chatter. I had to buy her rounds as she told me the stories of the town and its famous resident (da bar). 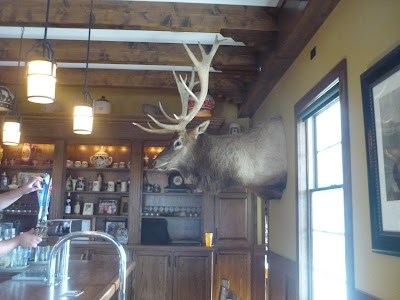 The view from my seat at da bar

It's these type of places that always have the best fried foods. I asked the bartender if the rings were hand battered and he told me yes so that's what I started off with. I'm not sure that they were but they were good anyway. We weren't starving and still had a few hours to drive with a stop for pizza in the Quad Cities so we passed on the huge tenderloin and got a hot ham and cheese sandwich. They didn't have the house specialty spaghetti soup that day which I would of tried even though it was hot as hell. The sandwich was really comforting and homey and went great with my ice cold beer from the tap.

Onion Rings and hot ham and cheese from Breitbach's 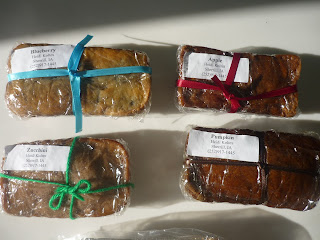 I'm going to go back here one day but on this visit in particular we had to push forward and we paid the bill, I signed the guestbook and we went out and checked out this lady and her daughters baked goods for sale at the fair days. I got an apple crumble and some zucchini and pumpkin bread that were eaten later in the week and really good and tasty. Dubuque wasn't far so we stopped into town and rolled around and again I was captivated by the place. Another classic river city, it had that old school feel with a newly built riverfront district. So it had old and new going for it. We only had an hour or so but I liked what I saw and again-I will be back. I don't know if I've ever seen so many historic buildings and churches and old architectural gems in one little city. Main street? check. Old manufacturing district? check.

The stories these establishments could tell...

We just wanted to say Property Hunter shifted this service to a level much higher than the broker concept.
you can see more details like this article Property For Sale in the pearl qatar