Hello again my friends. It's time for some regional eating as we head on down to the Quad Cities area for some of it's namesake style pizza. Last Fall I went on a classic American road trip that took me and a friend out West thru Middle America and back. As summer nears so do the reports from this trip which ended in Silvis, IL before heading back to Chicago. The reason we stopped in the Quad Cities was because of it's location along the Mighty Mississippi which we had driven down from Minnesota. In case your unfamiliar with the Quad it consists of five cities located in Illinois and Iowa that are straddling the Mississippi river. Together the cities add up to about 400,000 people and they even have their own signature style of pizza. Luckily for me my travel companion was all about the food stops on this trip and she didn't complain once about going a few hours out of the way for some pizza. I had heard many good things about Frank's Pizza in Silvis, IL (about 10 mins from Moline, IL) which put it on my must visit list and this trip gave me that chance. 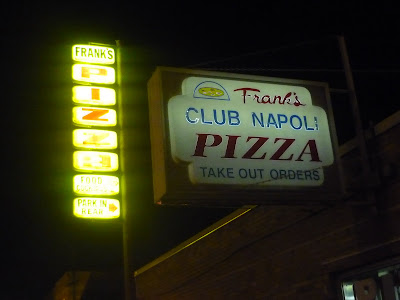 a locals favorite in the Quad Cities area

Frank's has been proudly serving the people of the Quad Cities since 1955. When it comes to tavern pizza joints from the 50's they all have similar vibes and looks inside the place and also look great from the outside and there were no exceptions to this legitimate stereotype with Frank's. It was pretty easy to find for us and when you walk up to the place you can see the pizza makers in a large window busy at work making pies. We were there on a Saturday a little after 8p and there were a good amount of people there but I think we missed the family rush just before that. There are two cafeteria like dining rooms on each side of the bar which is in the middle. As always I took a seat at the bar. 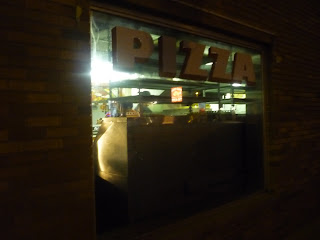 The window from outside where you can look in

After taking our seats the friendly waitress asked if we wanted anything to drink and we ordered our usual's and she asked us for id. That was fine and it sparked up a conversation with the older Harley riding dude sitting next to me at the bar who said "that cant be anything but a good thing if your over 21". Frank's doesn't have any beer on tap (all bottles and cans) and no pop from the fountain, it's all cans at this old school favorite. 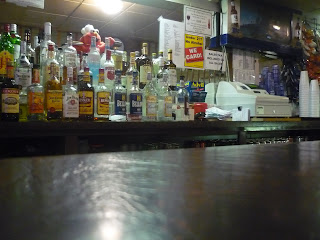 View from my seat at the bar 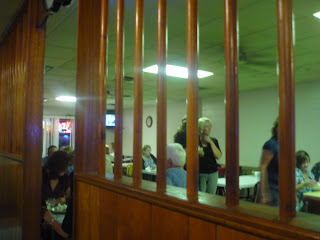 View behind me at the bar of the dining room

The Harley riding dude was there on his birthday for his favorite meal, a small cheese pizza from Frank's which he said he has been eating for 51 years. We did some shots for his bday and then I took a look at the menu. In the Quad Cities there's a place that claims to have created the taco pizza and I was surprised and intrigued by a taco pizza on the menu at Frank's. But with this being my first visit I already knew that I was getting my usual standard order of a large sausage pizza. Frank's pizza comes in two sizes and they are different in shape and crust. After a few drinks the Harley dudes small cheese came and he offered both of us a slice and I happily accepted and he raved on about how good it was. However for some reason didn't eat the crust, which I thought was excellent, leaving the leftovers from each piece on his plate like he must of done on his 1st visit 51 years ago. No, I did not ask him for his unwanted pieces of crust. 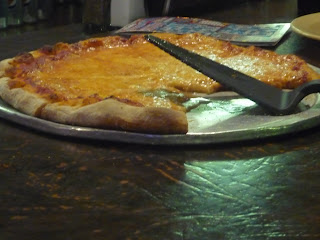 a small cheese pizza from Frank's

I thought the cheese slice that was shared was excellent and I would of been happy had we ordered that. I anxiously awaited the arrival of our large sausage. As you can see in the pic above the small pizza is a round pie similar to the standard pizza pies found around the country. It certainly however didn't taste standard. The large pies at Frank's are made in that true Quad Cities style. The pies are made with a thin, but not cracker thin, bread like dough and crust. They come sliced in long thin strips as opposed to squares like they do with tavern thin in Chicago or in wedges, like they cut them on the east coast. When you order a sausage pizza it comes layered with ground Italian sausage heavily laced with fennel. This however isn't the first time I have come across this unique style which is enjoyed in the Cal City/NW Indiana region at John's Pizzeria in Whiting. I was a fan of Frank's and Quad Cities style pie before I took a bite. 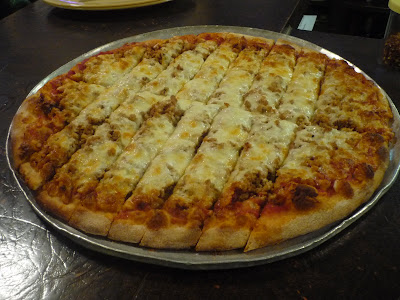 So when our pie and arrived, piping hot, I ordered another one to go and let the one we were gonna chow down cool down for five minutes. My girl mentioned they were like "pizza bread sticks" and was very excited to try them (she loved it) and was wondering how the hell I knew where to eat at every dot on the map. 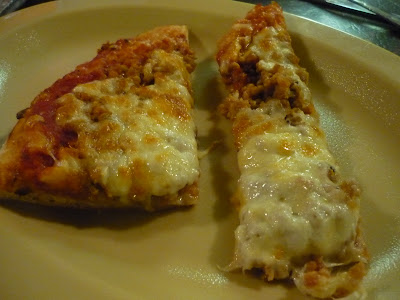 Each piece of pizza has the middle part and some crust

The odd way of slicing is not the only somewhat unique thing about Frank's pizza, the other being the loose sausage. Something about loose meat in the Midwest, we love it. They make their own blend and I am a fan of this style, though not as much of the tavern style sausage found at many Chicagoland favorites, I still really like it. Frank's sausage was off the chart, I wish they stuffed this stuff into hog tubes and sold it next door or something. It was loaded with fennel and full of spice, I mean real nice amounts for a heat head like myself. Even before loading the red pepper flakes on my pieces it was spiced to perfection with a perfect amount of zing. 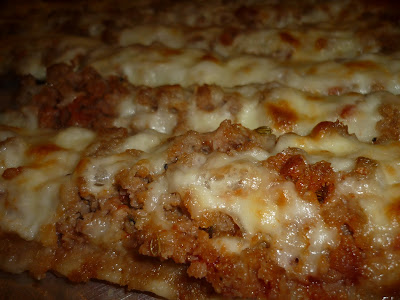 Up close of the goodness

I didn't dig too deep but there isn't too much info around the WWW about Frank's. It seems the best info is from the Quad Cities Pizza thread from LTH. In that it mentions that this (Silvis) location is the original, which it damn sure felt like. There's also a location in Bettendorf, IA. I hope this story can attract some lurkers or web searchers who have a little something to dole out to me, maybe some interesting tidbits to share? What's your favorite spot for Quad Cities style pizza? Which place did you eat it at in your youth and where did you grow up on it? 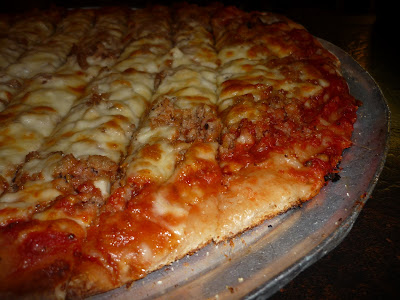 Just a little info on the sausage. You said you wish Frank's Pizza would stuff their sausage in a hog tube. It's on the menu and it's called the Stromboli. The sausage is put into hog casings and cooked in the oven and then simmers in beef stock in the steam table. The sausage link is sliced lengthwise and served on french bread with peppers. You can also add cheese and sauce.

Sorry it's a year and a half later, if i get a sausage or a taco pizza I always do Harris because it's right down the street in Rock Island. However, I love the meatball topping from Frank's

Best pizza in the Quad Cities!!!!

Thanks for sharing! I'll be heading through the Quad Cities in June en route to the GOTR festival in Waverly, and will be looking for this pizza on the way. As for the style, I've had Roots in Chicago (which was okay) but it's Langel's (bar is called Rodney's) in Highland, IN that has been the gold standard for this type of pie (thus far). Looking forward to trying the real deal.

Next time you're here make sure to have some fried chicken with your pizza, it's fantastic and try the spicy Italian sausage sandwich too, known as The Freddy around Chicago. Frank's puts all others to shame.

Next time you're here make sure to have some fried chicken with your pizza, it's fantastic and try the spicy Italian sausage sandwich too, known as The Freddy around Chicago. Frank's puts all others to shame.

Many years ago there was a Franks Pizza in Green Rock. I guess it closed down a long time ago. I moved to Geneseo in high school, so I lost touch. I graduated from College in 1987 and moved to South Carolina. I have lived in South Carolina for over 30 years now. I have tried a lot of styles of pizza and I can't find anything close to resembling Franks Pizza. I sure wish I could. I went back about 15 years ago and ordered 2 large sausage Pizza's. It was as good as I remembered.