-Grubbing in Chicago
Where the locals eat and drink.

Hey y'all how's everyone doing today? So I was digging thru my "food" folders which are loaded with pictures of places I have stopped in at over the last few years. I'm talking 100's of folders with so many spots that you forget about some now and then. However there is a method to my madness and when I went to the Atlantic Bar & Grill a couple years back I had plans of returning but never made it because sometime you just forget when theres this many places to eat. Add in the fact I will travel to other states to eat and you can imagine how many places are waiting for their post on S'C'&C. So since Lent season is almost here for all of y'all that practice it, I thought now was a good time for Atlantic since they have a AYCE fish fry. The Atlantic is a really nice neighbor to have as your pub if you live in the 'hood. 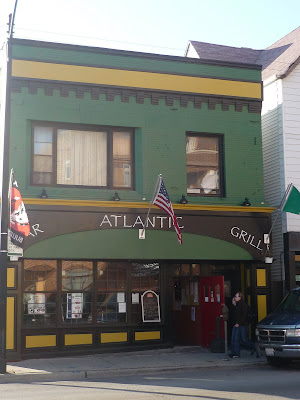 a nice locals pub on Lincoln ave in the Square

I mentioned that I haven't been to the Atlantic in sometime and the only reason for that is the fact I go everywhere. So sometimes even places I like don't get a return visit for quite a while. But I was going to the Atlantic before I had my camera and it was always on Tuesday's for their burger special. Unfortunately I don't have a picture of that burger because I haven't ordered it with my camera on hand. I will be back for their fine pub burger sometime soon and it will be featured on here when I do. But this post will feature a visit from me and buddy on a Friday. The Atlantic is a fine pub and the pour their Guinness properly, if I was a neighbor it would most likely be my local watering hole. They have great specials on food and drinks and I like the place as a whole. As good as the burger is my buddy wasn't a big fan of the Shepard's pie which he said was nowhere near authentic and he lived in Europe for a few years. I thought it was ok as I had some of his but still think this is a dish best made at home to your specifications since they're are so many variations. 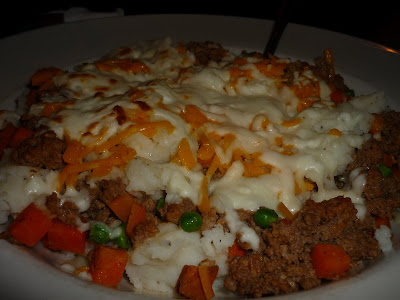 On this same visit I passed on the burger since it was a Friday (burger special is Tues.) and went with the Friday special which is an all you can eat fish and chips. Obviously this is dine in only so we ordered a few cold ones before and during our meal and went at it. This wasn't best batch of fish and chips ever but at $9.95 for AYCE, I wasn't expecting it to be. Some pieces were meatier than others and some were fried hard but since it was all you can eat, I didn't have to eat those pieces anyway. The fries were steak fries and I like those with pub style steak sauce which they have so I was happy with my meal as a whole. It was filling and definitely not bad just not great. So go there for the brews and eat some food if you get hungry after a few. However if it's a Tuesday, go for the food and have some brews too. The burger special is one of the best of any bar in the city. More on that burger later on chibbqking. See ya next time! 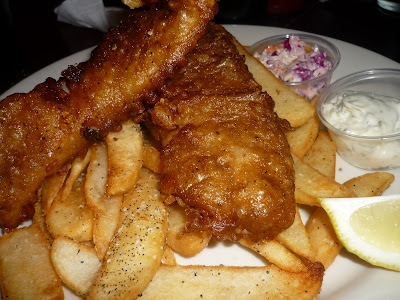 AYCE Fish and Chips from the Atlantic