Today were heading downtown to the Goldcoast to a relatively new restaurant located on Dearborn. If your from the city and follow the food scene, odds are you've heard of Chicago Q. Before they even opened their doors this place was being chatted about amongst the self righteous food snobs from all around town. Since it's in the Goldcoast, at the start of fancy downtown, and resides in a space that before Q moved in, housed one of the most expensive restaurants in the city, the prices are a little higher than most BBQ places. But this is by no means a shack. In fact it's gotta be the nicest restaurant anyone can eat bbq at. I got a chance to visit the fancy upscale BBQ sitdown restaurant that opened in the fall of 2010 about a month back. I thought now was the perfect time to post about it. 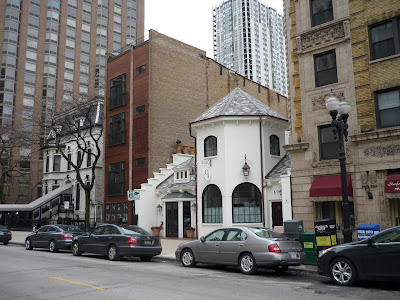 Why was now the perfect time to post about Chicago Q? March Madness is here. When I made my visit me and some other BBQ enthusiasts headed over to watch a KU basketball game and eat some award winning BBQ and put down a few too. The place has two levels and upstairs you can dine with groups of people both large and medium sized, they got you covered. Chicago Q will let you sit upstairs where they have a room with a large flat screen TV with couches and tables for you and friends to eat and drink at while you watch the games all while they serve on you. So its a great spot to go with a group if you want to watch a sporting event. You might want to call ahead if you plan on using this setup. On my visit I got comfortable upstairs and took a look at the drink menu and went with a mint julep to start. 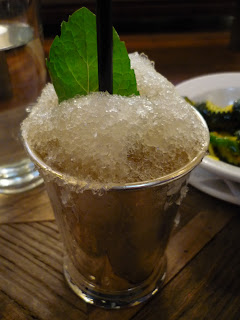 My cocktail was very refreshing and tasted as good on a freezing cold January day as they do on a hot July afternoon. Chicago Q has a full liquor license and they offer some nicely mixed cocktails and a very nice selection of micro brews and other fine beers, wines and spirits from around the world. After my drink came, some complimentary pickles arrived and I was pleasantly surprised. I love pickles, these lil' guys are called their bread and butter pickles and they also bottle them for retail sale. Their made from a special recipe that starts with cucumbers and then combines them with a sweet blend of onions, garlic and spices. As if these spectacular comped cucumbers weren't enough, they also comp you with some 'Pig Powder Chips'. Which are homemade potato chips dusted with their award winning rub, also available retail. Again, very good, these are great treats during the game before you get going on the BBQ part of the menu. 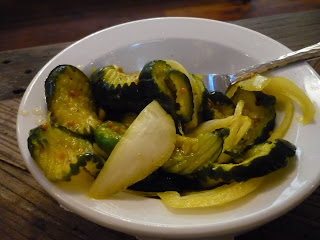 Bread & Butter Pickles from the q 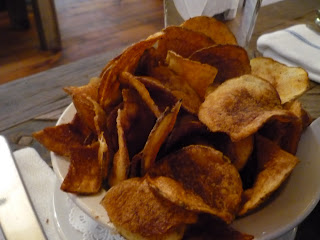 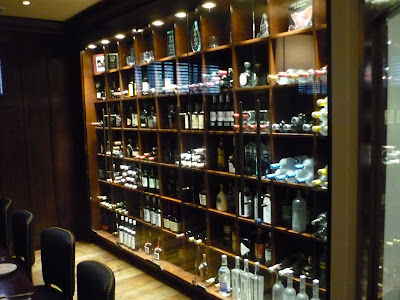 The upstairs large dining room with a table for 15+

Well it wasn't just the fact that there was a fancy BBQ restaurant opening that created so much buzz. It wasn't just the prices either, even though Chicago q offers two types of ribs, the regular rack and the award winning rack which is $11 more. So it's got some weird things going but so far so good for me. But the real reason the buzz was there was because of who was opening the q. It's ran by Lee Ann Whippen who happens to be a BBQ world champion. The name might sound familiar if you watched "Pitmasters" on TLC. Lee Ann was on the show that featured some of the more popular BBQ pitmasters from around the country. She is a regular and well respected smoker on the BBQ trail. She's the force behind Wood Chicks BBQ in Chesapeake, Virgina. That restaurant developed after the Wood Chicks BBQ team she is a part of took several state BBQ championships and made $1,000's of dollars while smokin' away on the BBQ competition trail. I got a chance to take a tour of the kitchen at q given by none other than the beautiful Lee Ann.

So all that food talk and some amazing appetizers made me really hungry. I was lucky to be there with five others so we were able to sample a few things off the menu. We started with an order of hush puppies and onion rings for each table. The puppies are described as "house bacon cheddar hush puppies" and were one of the best app's I have had all year and or in a while. They were addictive and the best of their kind I have ever had. The onion rings were pretty much just as good too. They make them the way I like them which is with a light hand tossed buttermilk batter, cooked to a perfect crisp golden brown. MMM MMM good. 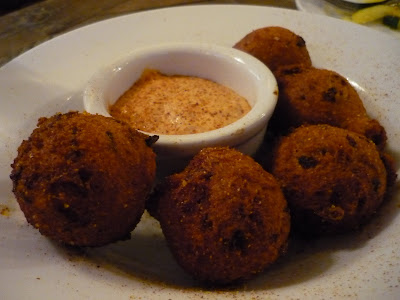 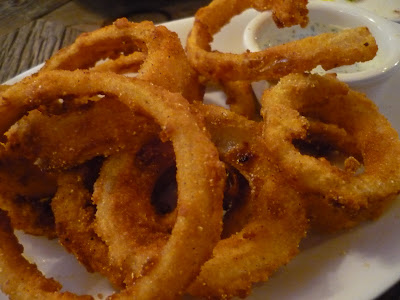 Both complimentary items as well as both of the appetizers were excellent. I liked all four to the point where I will return for them and some good beer and well mixed cocktails. After the app's we moved onto another dish off the starter portion of the menu which were the smoked dry rubbed chicken wings. Explained by Lee Ann in the video up above these were sent from the low country heavens. I absolutely loved these and thought they were the best non fried set of chicken wings that I have had in a lifetime, definitely the best set of smoked wings I ever had. These were sticky from the rub and smoke and the meat inside was a perfect pink. I thought these were fantastic and I would eat them up all day. However my friend who came with me to meet the rest of them wasn't a big fan so I guess like all BBQ it's about preference. 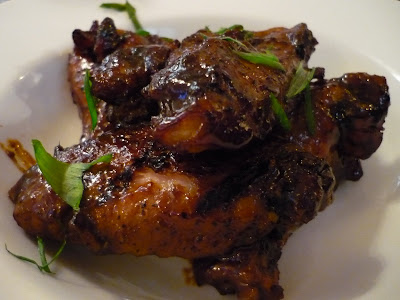 Nice start to the meal huh? After all the wonderful starters we moved onto the BBQ. Chicago q offers a nice selection of smoked meats including Kobe beef brisket, pulled pork, smoked chicken and both baby back and spare ribs. You can order them by the plate and in some cases in sandwiches. Also on the menu is a two meat combo with a half slab of ribs. We would end up going with the combo with pulled pork and kobe beef brisket along with a half slab of baby backs. The meal comes with choice of fries, cornbread or cole slaw and also all of the house made BBQ sauces. They make a mild, spicy and Eastern Carolina vinegar sauce for your dipping pleasure. They are served on the side as they should be. I thought the spicy was the best one and my favorite to dip the meats in. Sorry for the poor pictures but I was really hungry as were the others with us so I snapped fast. 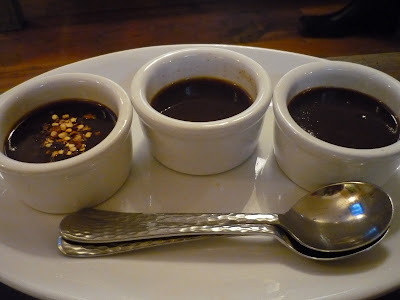 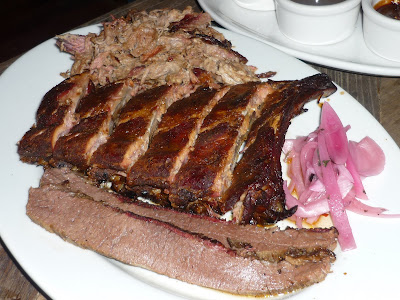 My combo platter seen up above came with some pickled red onions which were a nice pair with the pulled pork and cornbread which was the side I chose. Unless I'm in the Carolina's I'm not usually going to order pulled pork at a bbq place. It's also the easiest of the big game BBQ meats to smoke so I like to do them in my yard. This wasn't the best pulled pork I ever had but I liked it paired with the onions and corn bread which made for a hearty sandwich. My half slab of baby's were pretty good too. Again not the best ever but I don't usually get baby backs opting for spares over them and these reminded me why. It wasn't q's fault, these were just tender and had little resistance since they were baby backs which arent as fatty as spare ribs. However the brisket was phenomenal and my favorite of the three. Some of the best brisket I have ever had and surely the best in Chicago. It reminded me it's time to get my ass to Texas. The brisket melted on my tongue and had the perfect hint of smoke, I could eat that all day. The fact it was Kobe beef gave it great flavor and texture too. I will give their spare ribs a try next time and I am betting they are much better. After all who am I to question a grand BBQ champ like Ms. Lee Ann? So in very short summary, I am a fan of Chicago q. I encourage those in the area who like award winning BBQ to check them out sometime soon. 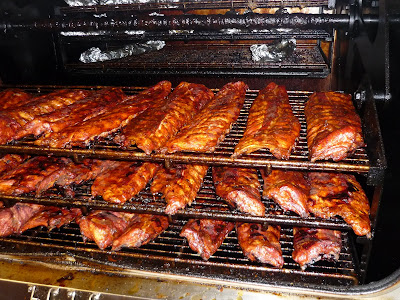 Racks of ribs smokin' away