-Oh Yeah, I've been there too
Gale Street Inn

Neighborhood: Jefferson Park
Cuisine: Traditional American
Price Range: $15-$30
Would I go again? I've been to the Gale Street a few times although not in quite a while. I assume I will one day go again when invited to a function or dinner there. It's one of the areas busiest restaurants and always has people eating there, it will forever be a part of that neighborhood and the city. 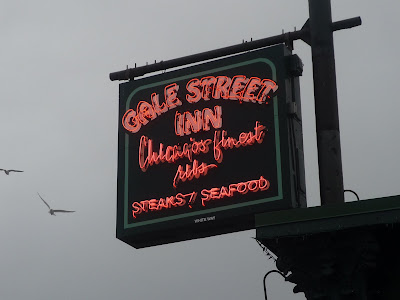 a Chicago tradition on Milwaukee ave in Jeff Park

The Gale Street Inn is a Chicago institution, especially to people of the Northwest side. Its the oldest tavern in the neighborhood located at Gale Street and Milwaukee ave and people have been gathering there to drink and eat since 1963. What started out as some BS ended well when George Cholies was forced to abandon his sandwich shop across the street so the city could construct the Jefferson Park Blue Line Stop/Bus Terminal. The place was sold to the current family which owns it in 1984 and is a popular hangout for neighborhood folk which consists of alot of cops and quite a few people who work at O'Hare. Gale Street as you can see from their neon sign is known for their ribs. However you wont see me calling these bbq because that they arent and they have no smoke whatsoever. They're ribs, baked, Chicago style much in the same way Twin Anchor's and Miller's Pub do theirs. All three also happen to be historic Chicago taverns that are great places to visit for a drink and maybe some eats. Now I'm from the camp of all ribs are good and I like these but no they arent the best. No smoke means not real bbq and no liquid smoke does not count! 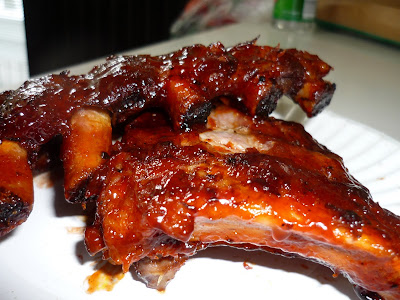 a slab of ribs from Gale Street Inn

Ever since I started my site I've gotten emails and suggestions with people asking me if I've been to Gale Street Inn? Oh yeah I've been there. I went quite a few times as a kid and have been back twice since. I'll admit that as a kid I really loved these baked Chicago style's many spots are famous for but I've grown out of that phase. I'll still eat ribs made this way but wont ever be rushing to get me some. Referred to by some as meat jello, these baked ribs have meat that literally slides right off the bone with no resistance whatsoever. This picture below just about sums them up. So if you were wondering if I had ever been to Gale Street (because you never saw a post on here) now you know. I have indeed and imagine I will get back there again at some point in my life. It's here to stay. 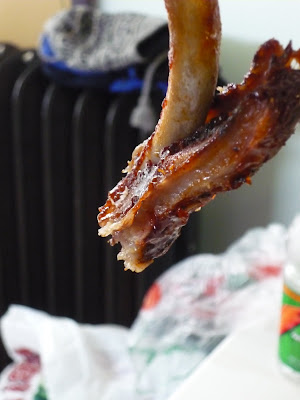 a slider rib from the Inn

We've tried the Jeff Park location
numerous times and while ok to good, we've never really had an outstanding experience.

However the Island Lake location has always rated a 5 Star experience for all food (especially the Ribs) and the atmosphere.