In Chicago the end of the holiday season is the beginning of realizing winter is here. Its during January and February that some of the coldest days of the year come to the second city. So during these months I make up plenty of wintertime meals that are sure to warm up my belly. One of my favorites to make on Mondays (any day is fine though) is Shepard's Pie. Now the reason I like to make it Monday's is because there will usually be mashed potatoes left over from Sunday nights dinner. After all it is believed that Shepard's Pie was invented sometime in the 18th century by peasant housewife's using creative ways to serve leftover meat and potatoes to their families. Its also generally agreed that it originated in the north of England and Scotland where there are many Shepard's. Its an all time favorite of mine that I've learned is usually best made right in your own kitchen. Generally ground lamb is used and if available I will use that but if not ground beef is fine with me. Its still very popular especially in pubs around England.

leftover mashed potatoes (2-3 cups)
2.5-3 lb's of ground beef or lamb
1 cup each of diced carrots and onions
1 cup of frozen peas
1/2 cup shredded cheese (I use cheddar)
1/2 cup steak sauce
1/2 cup chicken broth
Dashes of salt, pepper and Worcestershire sauce
Bottle or can of Guinness (to enjoy with your meal)

Step 1) Start off by sauteing your chopped carrots in butter until nice and soft. Remove the carrots and add the beef and onions and cook until well browned. Drain most of the fat from the pan and use a potato masher to mash up the beef and let it cook another 3-5 minutes. Add the carrots back in along with the peas and chicken broth and let cook for 10 minutes until some of the broth evaporates. 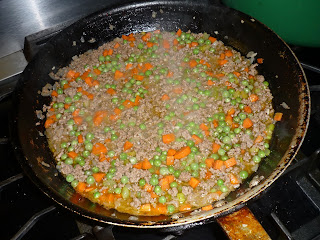 The broth makes it so that its not too dry

Step 2) Make sure your mashed potatoes are fluffy and of not add a little more cream and heat thru on the stove and mix in cheese and mix it up and set it aside while your beef cooks in the broth.

Step 3) Add the steak sauce and dash in the Worcestershire sauce and S&P and mix it around and let it cook thru for three minutes. Turn off your burner and lube up a oven safe casserole dish. Unload the meat mixture evenly into the dish and top with potato spread. 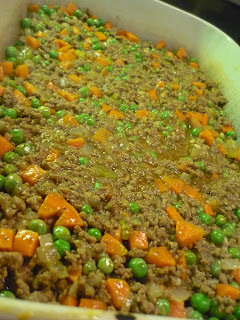 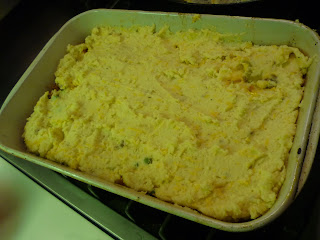 Dish ready for the oven

Step 4) Bake at 350 for 15-20 minutes checking on it every five and take it out when the top of it looks something like that seen in the video of mine below.

Step 6) Let it rest up for five minutes and then cut into squares and serve in a bowl with some steak sauce at the table. Crack open your Guinness and Enjoy. 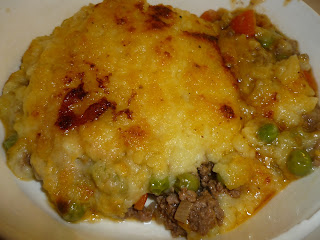 a bowl of mash for a cold winters night

I find that the chicken broth make for a much more juicy product and stops the beef mixture from drying out during its time in the oven. The steak sauce adds some flavor element and I always like to add extra when I've made my bowl. I just pour some on top and mix it up into a mashed potatoes with beef and vegetables mixed in. 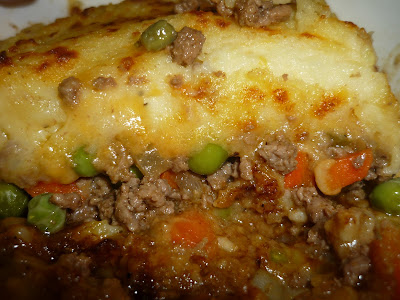 Goes great with a Guinness 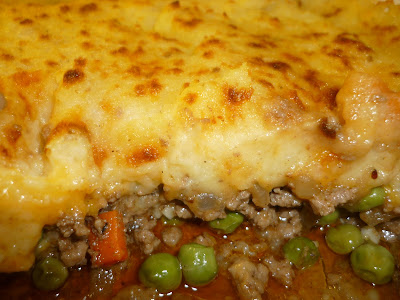 Well if you liked this, there's plenty more to come and if you thought last years Super Bowl Recipe ideas was something, well than just wait for whats coming the first of the month (February). Stay tuned.
Posted by KingT at 12:08 AM

I've been looking for a good shepherds pie recipe for ages. I think I finally found one!