Captain Nemo's for a Beef with Hot

-Got Beef? Italian Beef
as seen on 'What's Your Beef?'
Captain Nemo's has been serving sandwiches and soup to the people of Chicago since 1971. The original location is the Rogers Park store which is still open but I have been visiting the Lakeview location on Ashland since my early youth. It was a frequent stop after basketball and football games and its always been in my rotation for a few visits a year since. I'm not sure much has changed at Nemo's except the prices. Its been the same since the early 90's as far as both the food and the interior go. Each booth has a wooden painting attached to the backrest. Each booth has different famous people of the time eating a Captain Nemo's Sub. When I was younger I always sat in the booth with the Chicago athletes. I think maybe once or twice I might of ordered an actual sandwich from there because I knew the beef was legit the first time I tried it and that was the first thing I tried. Whats even more amazing is that the taste and ingredients used to make it havent changed a bit. 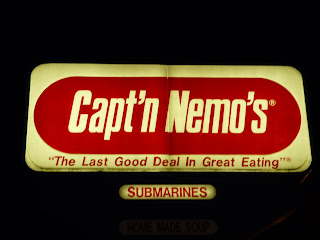 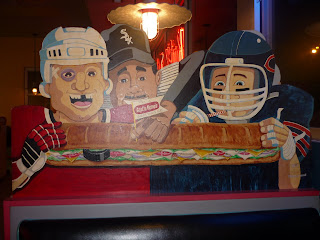 Hey! Ozzie is still in town and so is Nemo's

Captain Nemo's is a great beef during the winter months. As soon as you walk in they offer you a free small cup of the days soups before taking your order. Its always been that way and always makes me order a combo which is a sandwich, soup and drink. I would highly recommend the combo, beef for your sandwich with their split pea soup. Its a great deal, one of the best in the city. The Italian beef definitely has a strong roast beef flavor, more so than most other beefs I have had. It's homemade and is also sliced a little thicker than most places so that also makes it very close to a warm sliced roast beef sandwich in gravy. But the gravy is its strongest element and much better than many other places around town. Just like any other beef joint I have had really good beefs from there and on a few occasions just OK ones. But when the beef is fresh and fall apart tender in the peppery spiced gravy its a great beef and one I get a few times each winter. Its a great takeout beef because the bread holds together the sandwich and they know how to wrap one up right. Wrapping beef in aluminum foil is a complete no no. 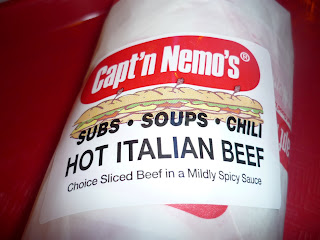 Nemo's has always had the stickers and wrapped it right 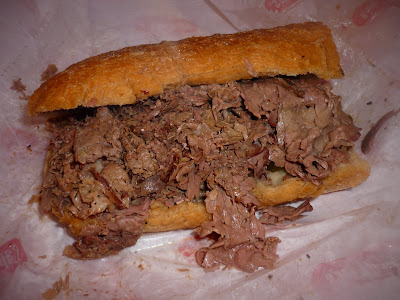 beef with hot from Captain Nemo's