We are lucky to have so many different choices of various International cuisines here in Chicago. One of Chicago's popular eats is Jamaican food. This could be due to a pretty high rate of Jamaicans in Evanston and also just due to the cuisine itself being so damn good. The funny thing though is that most of the Jamaican spots are found on or near Howard st (the dividing line between Chicago and Evanston), which is the far northside or on the southside. More spots are opening up in between as the years go on showing how popular Jamaican food is with all races of life. However what you will also find is that most of the spots on Howard st. or in Evanston use a stewed jerk recipe (baked and topped with a jerk sauce) and most places on the southside will smoke a jerked (marinated with jerk paste) chicken and serve a much spicier sauce on the side. One of the popular places for jerk chicken is Uncle Joe's which has a few locations throughout the southside . 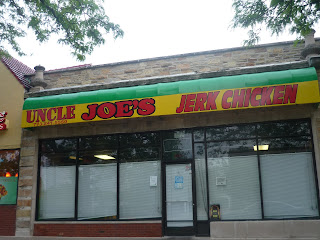 Every now and then I'll stop in at the Uncle Joe's in Hyde Park for some their chicken and or a beef patty with a bottle of Ting. As someone who's had some pretty good jerk here and there I'm not going to declare Joe's to be the best but I do think its pretty good when hot out the aquarium smoker and chopped up and eaten with a Ting to drink. The sauce is served on the side in a plastic cup and is good but again not great. I wish they would give more but you can always pay a little extra to make sure you have enough. The sides are also nice and along with the professionally smoked bird are the standouts. I like the mac & cheese and the greens. Over at Joe's like many other BBQ places on the southside, they are very good at real BBQ and you can taste it in the tender bird with the perfect hint of smoke. Add a little jerk sauce and you got a good meal. So good to some Judges that they ask defendants for jerk chicken brought back to the courtroom or else they will be given 100 hours of community service. Not hard to see why UJ's is favorite of locals and students from University of Chicago. 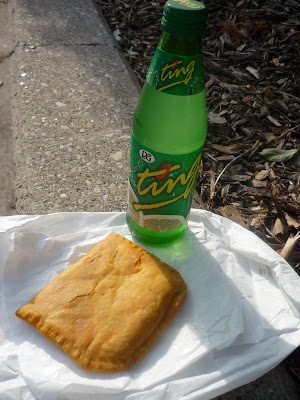 After a trip to Harold's, I'll stop at UJ's for a patty and Ting 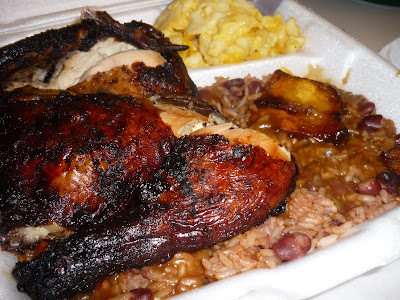