It's that time of the year, beer me up buddy. Oktoberfests are near and up the lake in Sheboygan, WI theres said to be a really good one. In fact Sheboygan has to be one of the best roadfood cities anywhere for a place of it's size (51,000 pop.) There are a quite a few "don't miss" type places in the pretty little town on the lake in between Milwaukee and Green Bay. I had two burger stops on the agenda on a recent visit in which we went wild, one of which I have been too before. I stopped in at the Charcoal Inn a few years back while on the Lake Michigan Circle Tour. 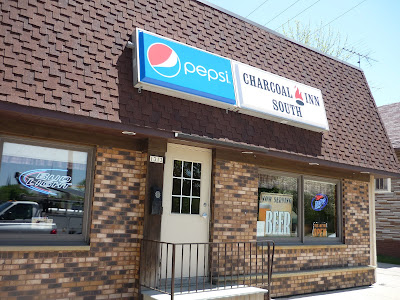 When traveling along the lake (Michigan) in Wisconsin one will encounter a type of cooking that certainly isn't unique to this region but is very popular up and down it and that's cooking with charcoal. It is somewhat unique in that so many restaurants do this and I'm not talking flame broiled using gas or electric either. They use real charcoal which is loaded into their indoor pits as needed by the grillmaster. The Charcoal Inn actually has two locations, a north and south, with the south being the original and right off the Circle Tour route. They serve both breakfast and lunch with their specialty being their charcoal grilled sandwiches.

The view as you enter & The grill at Charcoal Inn
Sandwich options at the Inn include the usual WI tavern suspects like burgers, brats and steak. Another popular trait at these charcoal grilled sandwich spots and stops along the lake is the use of butter, LOTS of it. The brats at Charcoal Inn are served split on yet another food specialty along the lake which is the hard roll. I love these toasted rolls and find them to be the perfect compliment to the sandwiches holding them together not letting them fall apart while in your hands as you eat it. The reason for my stop was a brat and burger sandwich. Which is exactly what your thinking, a burger patty topped with a brat patty. 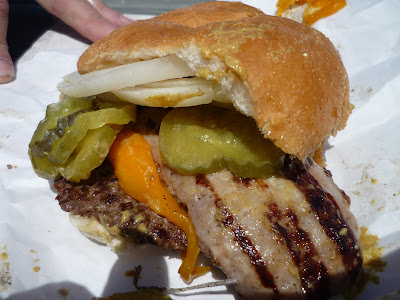 Brat and Burger with cheese from Charcoal Inn

Look like a gimmick? It isn't or at least I didn't think it was. Neither did my friend who I was riding with and named this sandwich/burger his favorite of the many we had and none of them were "nuttin special". 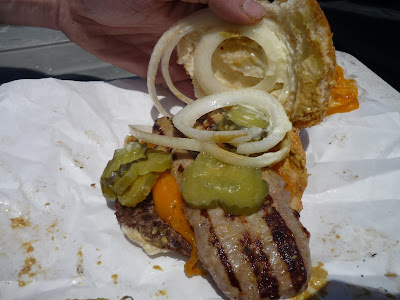 The hard rolls are toasted on the grill and the sandwich is then built with a hamburger patty topped with a slice of melted sharp cheddar followed by a brat patty which is topped with raw onions, pickles, brown mustard and PLENTY of butter (hold the catsup). Since this was the first real food stop after a few hours on the road I will say maybe that played a little part in it's goodness but I'd easily go back for another and then another if I lived anywhere near there. I especially liked the use of raw onions which is the standard topping for a brat as opposed to fried which are my preferred choice for a burger. The brat and burger sandwich, count me a fan man. 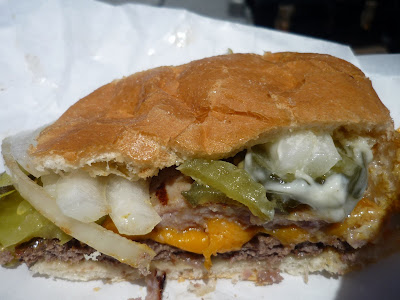 The next stop, also in Sheboygan, was on my list of places to get to in WI. Schulz's Restaurant is another popular place with the locals for real charcoal grilled sandwiches. It's one of them spots you gotta stop in at when you drive by. It's housed in a cool looking building and has that classic feel inside with a couple U shaped counters with stools for sitting and the charcoal grill on full display in the middle. 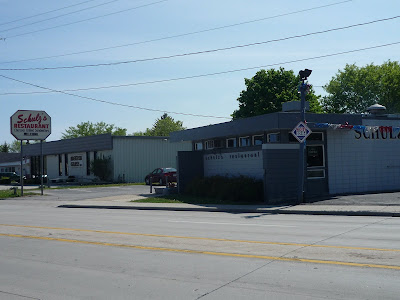 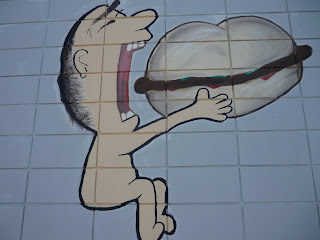 Mural on the side wall (Hey it's dude from Ron's Place)
Schulz's first opened up shop in 1953 and aside from the building which was built in 1967 it's stayed the same all the way. "Why spoil a good thing" is their motto. The original spot was a block away and when one of the sons bought the restaurant from his parents he built the current building where it stands in today.

The view as you enter & The charcoal grill at Schulz's Restaurant
Now in it's third generation they still do everything the same. All the meats come from Miesfeld's Market which will get a full chibbqking report soon. The hard rolls come from Hi Lo bakery which is another must stop spot in Sheboygan. They do have regular hamburgers on the menu but hey, this is afterall Sheboygan so you know they got brats in burger form too. Brat patty's are just the ground meat from Meisfeld's grand champion bratwurst in patty form as opposed to encased sausage. I was told the double is their most popular sandwich so that's what we went with. 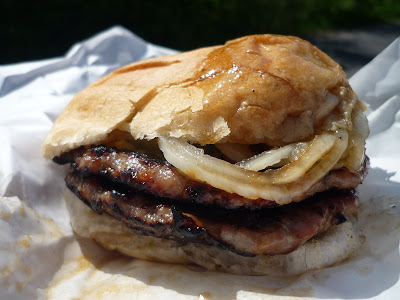 Look's good huh? and you know it was. The patties were excellent, same great taste you get in the brats from Miesfeld's just in hamburger form. It came with the usual's on a brat of mustard (brown), raw onions and also pickles if you like them which I do so I got. The hard roll as can be seen in the pic was toasted to perfection and went great with the rest of the ingredients and you know they load them with plenty of real butter too. How can these bad boys not be good? So next time your in Sheboygan or cruising on by make sure you try a brat burger, another special regional eat found in Wisconsin. Many more to come. 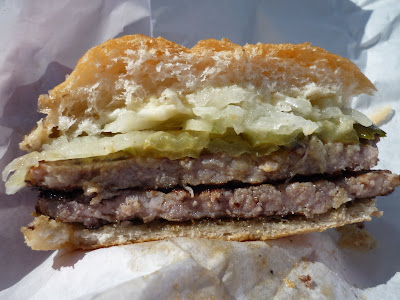