With the Philadelphia Eagles and Michael Vick coming into town next week were headed to a favorite spot of Chicagoland residents for a cheese steak. I went to Eastern Style Pizza in West Rogers Park last year when it came rec'd as a spot for a good cheesesteak in the area. The people that were doing so said it was better than Philly's Best and that they'd been eating them since the 70's when the little shack on Touhy first started offering east coast favorites in the area. 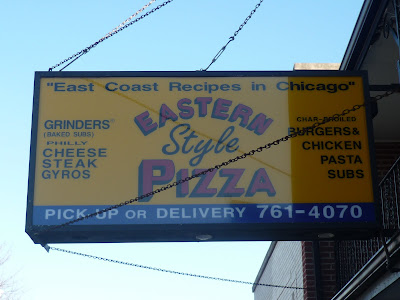 On my first and still only visit I was there for a cheesesteak but also got a slice of "east coast" pizza just to try it and compare to some other places who's slices I can stand. I thought the pizza was nothing special. In Chicago where everyone has good sausage on their pies, this place's sausage sucked and the slice was not exactly fresh. Oh well I really wasn't expecting much since I am a tavern style pie guy 'til I die. 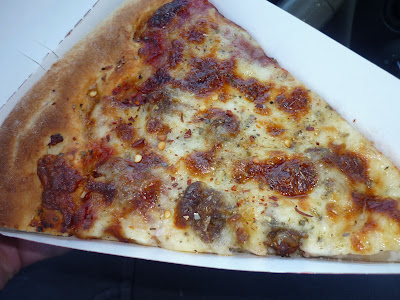 The pizza wasn't the reason for my visit so I was anxious to try my cheesesteak. Let me reiterate that I have never been to Philly so I don't know the real deal but I have also heard that neither Pat's nor Geno's is that, from both locals and tourists. I like Philly's Best and go to the one on Belmont a few times a year. Sometimes you just get a craving for some thinly sliced steak paired with potent onions and melted cheese all in some chewy bread. So I for one am a fan of cheesesteaks, no their not Italian beefs but that's because they're both different. I forget if you have the choice to order half or whole but obviously I ordered a whole if that was the case. 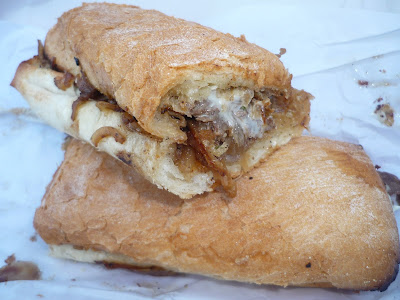 In all honesty I didn't really taste much of a difference in this cheesesteak and Philly's Best. The bread might be better at PB but I've been there more times than Eastern Style. The steak was good not great just like PB and I got the standard version which is with white American cheese just like over at Philly's Best. But this is a respectable cheesesteak so I gobbled it up and was happy I stopped into this place to try one. If your looking for a cheesesteak in far north Chicago or the burbs around there this is your spot. Go Bears. 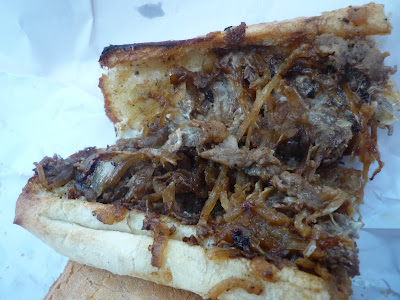 The insides of the sandwich

a few of my friends swear by the philly cheesesteak at Clark St. Dog at the corner of clark and halsted :)
conveniently located near Parrots my favorite old school jukebox bar