The most recent stop on the egg roll express came out of the blue. I was brought to a friend of mine's favorite Chinese restaurant in the Northwest suburbs for another dish I was about to launch a hunt for the perfect version of- beef chow fun. The locals favorite Yen Yen is located in a strip mall like most everything else out there. My friend insisted to me that this place had the best dry beef chow fun and since that is another Chinese American favorite of mine I was tempted to see if she knew what was up. We stopped in late one afternoon and I was surprised how much it was like China Chef in Morton Grove down to the placemat's on each table with Chinese astrology. It's pretty much your typical Chinese American suburban lunch/dinner place with the menu consisting of the usual items found on these establishments menus such as egg rolls, pot stickers, sweet and sour dishes, General Tso's chicken, Mongolian beef etc... 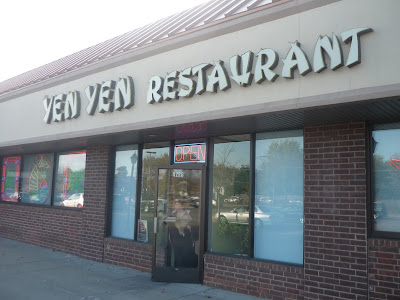 Location in Buffalo Grove (there is also one in Arlington Heights)

Just like is the case with egg rolls, beef chow fun can be really bad at most places. So I was all about it since the chow fun came highly rec'd and I was going to start a hunt to find the best beef chow fun in town. We got there after the lunch special times but the list was filled with alot of good options including the chow fun. My friend told me that the portions are huge in the lunch specials and same goes for the dinner priced plates as well. We were there for the dry beef chow fun so we knew we were getting that and along with it we ordered some egg rolls. 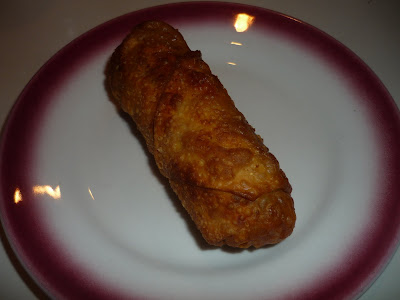 We were dining at the Buffalo Grove location but they also have a restaurant in Arlington Heights, both Northwest suburbs. I was very pleased with my egg roll and the hot mustard served with it. A very tasty version of this popular Chinese American snack. It had the hint of peanut butter and a nice amount of fresh tasting fillings inside and a crunchy exterior. The hot mustard was not from a package and I believe to be homemade. After the pleasant surprise from the egg rolls I could only hope for the same from the chow fun. 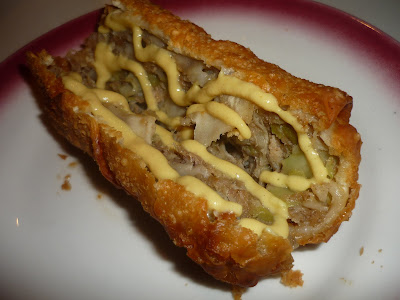 We had ordered the dry beef chow fun off the dinner menu. I had originally thought that the dry beef she was referring to was the beef used in the dish so I was thinking dried beef, beef jerky or cecina or something like that. It turned out just to be referring to the fact it was served without gravy. Ah now I see and do like, since I hate when chow fun comes in a pool of thick brown gravy. It turned out to be exactly what I love about chow fun and the best preparation of it I have had to date. The large flat rice noodles were crisped perfectly and the beef was in bite size tender pieces, not chewy or tough at all. It was all sauteed up with both regular and green onions and had no pools of slop. It was fantastic. At $12.95 it's not the cheapest price for a dish of it out there but it was enough to feed 3-4 dining in and with just two of us I had a bunch to take home. I might not have to go on my perfect chow fun search anymore. Do you got a favorite spot for it in Chicagoland? 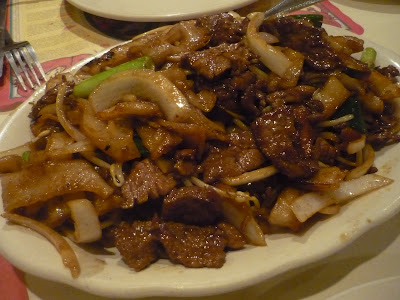