A little while back, Burger Bar (formerly Urban Burger Bar) opened up over on Clybourn just past North ave across the street form the new Apple Store. It's on the burger bus which has seen a steady increase in burger restaurants around the city. The owner, John McClean also opened up a pizza place (Sono) directly next door. I haven't tried the pizzas but have been over to Burger Bar which is exactly what it's name says it is - a bar with a nice selection of beer and burgers. 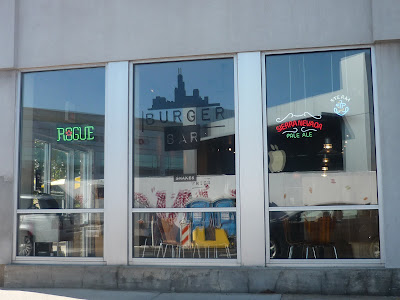 Burger Bar on Clybourn in Chicago

I stopped in here for dinner a couple weeks back and I liked it so much I was back not long after. To go with the nice selection of beer's they have a menu that features a whole boatload of different burgers. The beef burgers are no cheap meat and full of beefy flavor. I haven't tried the veggie burger but have heard its good for what it is, I never will try it either by the way. On my first night visited there was a decent sized crowd and it was pretty loud inside there, some people might not like that but it is a bar. They have a dining area with tables for groups and seats at the bar. We sat at a table this time around and I went with the "en fuego" with bacon added on and chose fries as my accompaniment. The others with me chose to have a "Hey Shortay" which is a burger patty topped with braised short ribs, warm onion and fennel slaw. They also have a basic burger ($9) which is a half pounder cooked to your desired doneness. The pricetag might seem a little high but they offer many toppings of your choice for free. 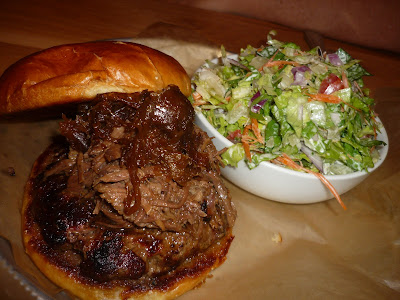 I got to eat half of a shortay and it was good but a little too much and not as flavorful as mine was. I wouldn't order it for me when I find myself back there. You can also substitute a salad for fries and that wasn't bad either. My burger was pretty damn good and came with jalapenos, pepper jack, pickled red onions and guacamole. It was cooked to my specifications and I enjoyed the combo of toppings all paired together. Since they use fresh sliced jalapenos I'm guessing the heat can vary based on how hot the batch of peppers used is because mine were hot, I needed another beer fast after my first few bites and I am no stranger to heat. The fries were fresh cut but skinnier than your Chicago hot dog stands fresh cut versions. I liked them too. Seeing as how this place is close to where I'm at, I can see myself back here before or after some Bulls games this winter/spring for some burgers and beer. 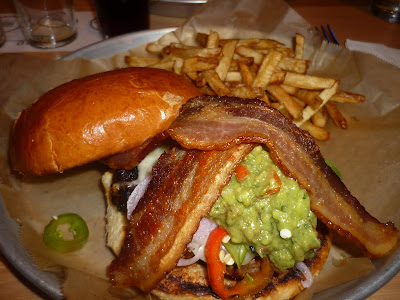