John's Pizzeria is an old place in Calumet City, IL that was very popular during its time lived. Like so many other old school family run joints it eventually folded and thousands of people were without their favorite pie in the area. Some had been eating there since they opened there doors in 1943. The closing didn't mean that they couldn't find the unique recipe of Johns pizza anywhere else. During its heyday John's opened up several other locations and the story goes as so. The original owner of the Cal City John's opened a location Griffith, IN and gave permission for another location in Dyer, Indiana. Then when the Cal City location closed the owner of the Dyer location purchased the Griffith location. Like so many other businesses that were booming back when Northwest Indiana was doing the same, there is always an interesting story behind it and a few other places that spawn from it. I am not one of them but there are so many people out there who grew up on this pizza. This is its story. 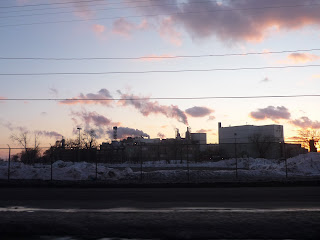 As time passed more and more John's started popping up around the area trying to bank off the name. Back in 2006 it was reported on LTHforum that there was a family fight over the John's Pizzerias of NW Indiana and the original Calumet City location. The story goes that pretty much every John's location in Northwest Indiana claimed blood to the original location and also claimed others were not linked in anyway. You can check out the entire conversation here. So then in 2007 up sprouted another John's Pizzeria in Whiting that goes by "The Original John's Pizzeria" The in depth reporters of LTH were told by the owner that this location is a franchise of the original and one of only two spots that can claim that. The other being the Munster location. The locations website seems to verify this. 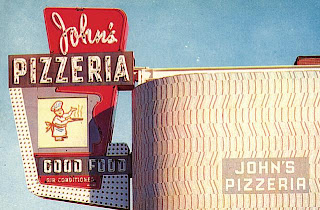 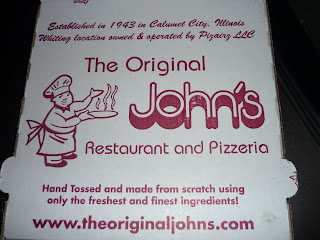 Established in 1943 in Cal City, Illinois now in Whiting, Indiana

The Whiting location of John's claims to use the original recipe and doesn't miss a beat with the signature parts of the pie that put John's on the map. John's pizza is thin crust but different from the tavern style thin crust that's so popular throughout the Midwest. One of the things that makes John's so unique is the loosemeat style sausage laced with fennel. Instead of chunks of sausage they sprinkle little pieces of crumbly sausage everywhere on the pie making it the loose meat of pizzas. The second part of John's claim to fame is the cutting style. They make one cut up the middle, then several cuts laterally which allows each slice to have both the center and the crust. I kind of like that whole concept since I'm a fan of both center and end pieces. But what about the pie, is it any good? it sure is. Its actually really good and I have been patiently waiting for my return visit. I haven't been able to try any other John's and never got to the original but from what I read the Whiting location comes pretty damn close if not exactly the same as far as the pie goes. Another big plus in my book is how it tastes the next day...should there be any. John's was as good if not better in the morning. 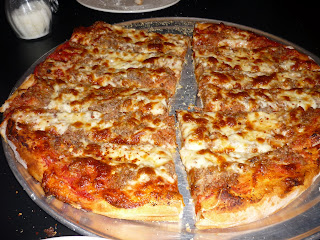 loose meat sausage pizza from The Original John's (Whiting, IN) 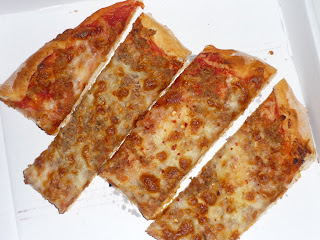 I'm all about the tavern style super thin cracker crisp but this pizza right here might of been my favorite thin crust that's not so thin. Now don't get me wrong the pizza is thin crust to most just not those of us who do it Chicago style thin. Even with all that said I really enjoyed the loose meat style of sausage and thought the sauce was better than good and the whole way of cutting it is really interesting. I visited John's on a frigid Sunday evening this past winter and when I parked the car and got out it felt like a ghost town. It was quiet as could be and the clouds of smoke from the factories that surround it were very visible due to the temperature outside. All of a sudden we entered John's and it was decked out in Christmas lights and flowing with groups and families enjoying Sunday night dinner at a locals favorite. I knew it was legit when I saw that every table in the packed house was eating pizza with half of those pies being the sausage. 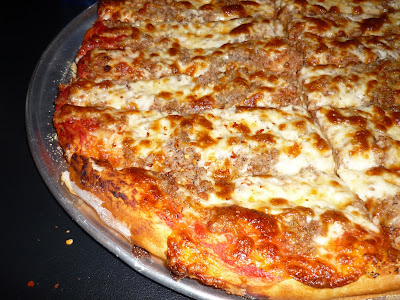 Can you deliver one or two of your pizza"s to me. The last time i was in NWI was 5 years ago. If they are packed in dry ice i think it can be done. My E- mail is chmielseb@embarqmail.com. Let me know and i will send you my address, thanks, Pat