--Got Beef? Italian Beef
as seen on 'What's Your Beef?'

Scatchell's beef and pizza is a tiny little shack located right along the border of Chicago and Cicero on Cermak and is technically in the Village of Cicero. It's a place that I had been to once or twice in my time at a younger age and for whatever reason never got back to it. The fact that its not too far from Midway airport makes it one of the best if not the best beef available upon your arrival into Chicago should you land at Midway. Scatchell's has been a fixture of Cicero since 1953 when Stubby and Eddie Scatchell opened its doors. When driving down Cermak it is very easy to recognize at night the sign with flashing lights. It was around 1995 that the owners of Scatchell's decided to let the people of Cicero get a days worth of work done in one swoop when they opened a car wash and laundromat in the same strip mall as the restaurant. 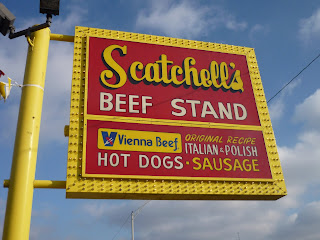 The idea was that maybe if the current owners who bought the store from the original owners brought people into the lot to wash their cars or do laundry they would pick up a quick bite to eat from the dog stand. Scatchell's is a classic Chicago dog stand, there's no where to sit but you can eat at the counter along the walls, take outside or take it to go. The menu is features all the usual suspects. Along with the Italian Beefs they offer up all the others like Italian sausage, Polish Sausage, Vienna Hot Dogs and slices of pizza which were introduced in the 90's and is about the only thing that's changed since it got its start over 50 years ago. I'm glad I finally made it back to Scatchell's because they really do a good job with everything including this Italian sausage. It had me thinking that maybe there's another combo out there worthy of a shot at Johnnie's crown. 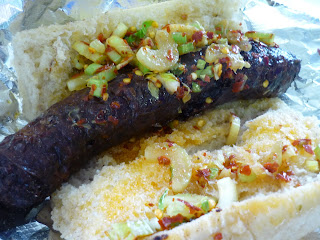 Scatchell's sausage with hot peppers is a very nice version

The star of the show on this menu is the beef and its not hard to taste why. The beef is sliced thin and tastes great in the spiced gravy and is loaded into the sandwich and topped off with some of my favorite housemade giardineria. They go thru alot of beef in a days work so the bread is always fresh and the price is right as far as a great lunch and one of the better beefs in Chicagoland. It was on my last visit that I realized that Scatchell's is one of the best Italian beefs in the only city to get one of them. Anyone traveling into the city thru Midway airport might want to check this place out if you already aren't. Its no secret that Scatchell's is a player in the beef game. 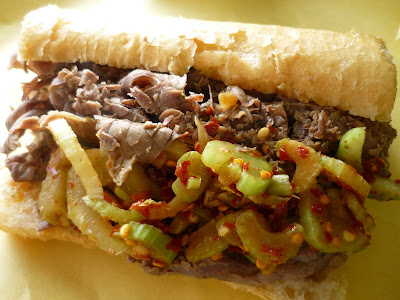 Quick Note: beef with hot is back to its monthly updates. You can expect a few beef shack scores a month.

long time reader, first time commenter! You are def on the mark with this one my friend!!!

It is damm delicious, i like pizza very much.