Its back to Kenosha for more good eats as we check out my favorite Drive-In food stop of all time. So attention please to Mr. Guy Fieri-you haven't been to the best until you've been to Big Star Drive In of Kenosha Wisconsin. I cant really explain why but Kenosha has quite a culture of classic old school Drive-In's located throughout town. I have heard elsewhere that a few of them have shut down in the past few years but Big Star is still going strong and that's all that matters to me. I have a real crush on this place and the people of Kenosha are lucky to have so many choices as far as classic food stops go. 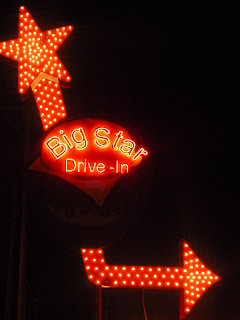 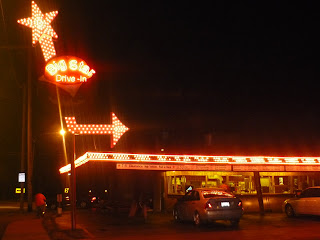 Big Star shines brighter then most

The Big Star is a family owned business that's been going strong since the 60's and it plays a huge role in Kenosha summers. Since its only a summertime operation the locals like to get it in as much as possible before they close for the season and its easy to see why they like it so much. When I made my first stop of the summer to Big Star last month it was already in full swing. I stopped in for a double cheeseburger ($2.20) and a drink one Sunday afternoon and became an even bigger fan if that was at all possible. This has to be one of the best burgers your going to get anywhere for under $2.50. There wasn't a spot open on my second trip of the day (read on) and on both visits it was packed with families, groups of high school kids, bikers and everyone in between. It was really rocking with lines of people at the takeout and carloads of people eating with not one spot available for any other cars. 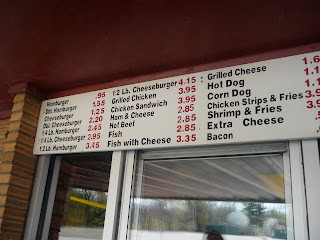 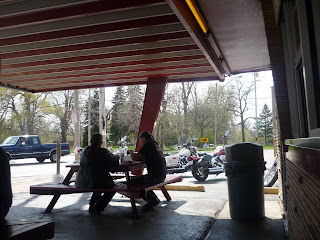 During my first few visits to Big Star I couldn't order anything but a signature burger. As you may notice on the menu above they have a few types of burgers from a single cheezeburger to a double to a 1/4 pound patty. While the beef is the same fresh meat used on all burgers the only way to go for me is the double cheezeburger. Its in a league of its own when it comes to Drive-In burgers and one of the best in Wisconsin. You might be wondering why I'm calling them cheezeburgers? well they use real cheeze whiz for the cheese. 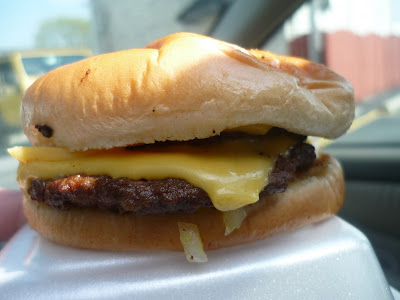 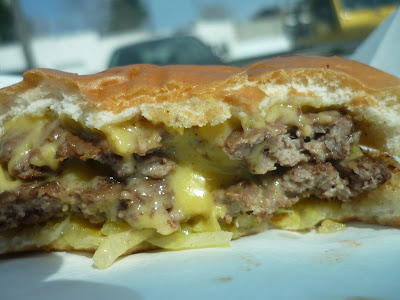 Real whiz in between makes for quite a treat

It was on this trip as I was waiting for my burger that I got a few whiffs of a biker crews freshly fried chicken-another Big Star Specialty-and it was making me go crazy. All I could think about was fried chicken and I remembered hearing from a few people just how good it was. After exploring other parts of Kenosha looking for old school Italian joints-I headed back for a chicken dinner. 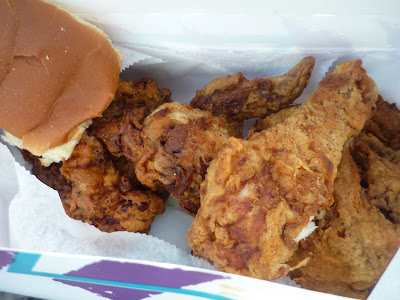 You can also get baskets with various amounts of pieces at under a buck a piece.

Seeing as though it is fried fresh you need to give them at least 20 minutes for an order. The chicken is lightly coated and fried to perfection from leg to breast each piece is crisp on the outside and perfectly cooked to juicy in the middle. I would have to say that this is in the top five for fried chicken dinners I've ever eaten. The chicken dinner comes with a perfectly fried piece of breast, thigh, leg and wing, an an order of crinkle cut fries and a buttered roll and at $4.50 its got to be one of the best meals under $5 anywhere. No need to go too McDonald's down the road. 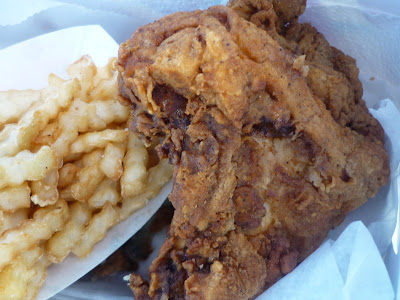 The breast was a great next day snack...tasted just as good cold. 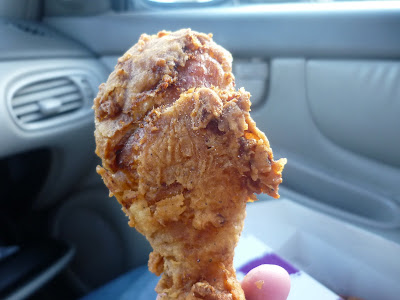 The chicken is fresh fried so it takes 20 minutes but is worth every minute. Its even better when Chicago Cubs baseball is on the air. Even though they SUCK. 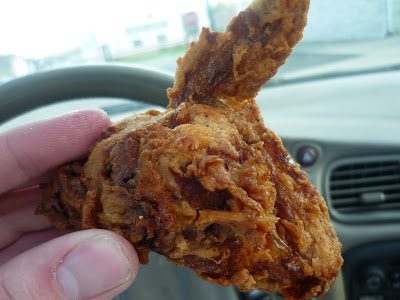 Big Star is on Washington Rd. which is just off Sheridan ave along the Lake Michigan circle tour.

The Big Star Drive In is a real treasure that I hope lasts another 40 years. Kenosha also has a Drive In movie theater just down Sheridan Rd. Its still open and they switch up the movies a couple times a week with current Hollywood blockbusters. I'm hoping that they will be showing Public Enemies which opens in theaters on July 1st and was filmed mostly in my neighborhood of Lincoln Park in Chicago and parts of Southern Wisconsin and Indiana. It seems like it would be a great movie to see at a Drive In theater with a box of chicken from Big Star. Click here for showtimes.

You guys sound like me -- love the junk food, a truly great part of living, yes?

My fave: stack of pancakes smothered in butter & real Vermont maple syrup. Oh, and a side of sausage.

Here's a quickie question for ya -- a bit off topic, but not too much. I read a poll by a company called electro-mech, which makes scoreboards, (I linked to it) that said like 50% of people think high schools should be allowed to sell sugary sodas & drinks to kids.

I'm one of them because I don't know how I would have gotten through high school without my morning coke (drink). How bout you?