Summertime is the time when certain foods shine like the sandwiches at our next stop in Chicago's uptown neighborhood. The businesses of Argyle st. in Uptown have long been known for their Asian goods. The street goes by the community name of The Argyle Asian business district. Most of the shops along and around the street are Vietnamese owned and all our Asian of some sort. So you better believe theres some good eating to be done in these parts and its an easy get-to since the red line drops you off right there. 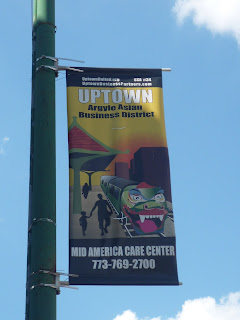 Located right at the corner of Broadway and Argyle is Ba Le-a French/Vietnamese bakery that's one of the areas most popular eateries. The shop is loaded with all sorts of goods to eat and special drinks but the star of the show are the Banh Mi sandwiches. These foodie worthy subs can best be described as a Vietnamese baguette. I want you to think of everything Subway is-awful bread, gray colored meat loaded with fillers and tasteless toppings. The people at Ba Le do it the exact opposite way and guess what? It's cheaper than five dollars and they have no annoying commercials. 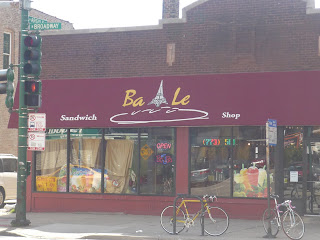 Besides the subs Ba Le has many different selections of ready to eat Vietnamese style lunches, noodle salads, a hot case with egg roll's, wings and other hot appetizers, a fresh bakery that bakes their own bread-used on the sandwiches and available to go by the roll along with many coffee drinks and dessert drinks made with tapioca, yogurt and other interesting items. The store is small but you would be amazed if you haven't been on how much stuff they pack in there. Since there's not much room to eat its mostly takeout but that's ok because everything is easily eaten on the go. With the weather warming up, there's no really no excuse not to. 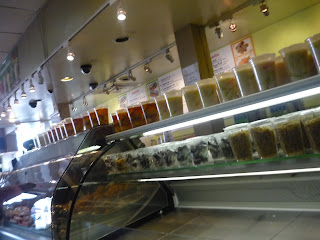 yogurt mixed with fruit and other random dessert drinks 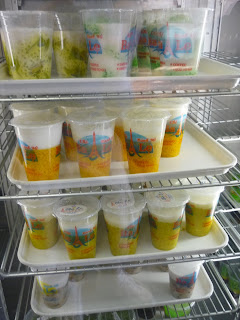 so many different choices packed into the shop 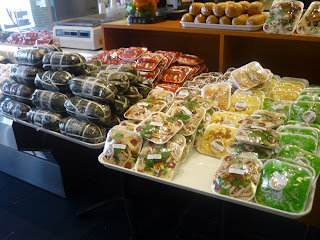 salads and takeout lunches are quick, cheap, easy and great 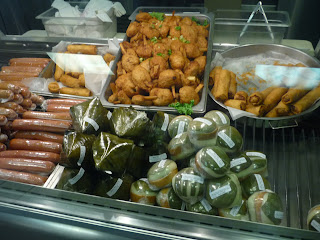 The lines of people waiting for a sandwich is pretty much a regular but don't let that deter you because the sandwiches take 2-3 minutes to make. There quick with the sandwich like Wild Bill was with his gun. A bahn mi sandwich is the above mentioned French bread with a Vietnamese twist and the most popular meat toppings are usually pork and chicken in various forms. What puts the exclamation point on the whole thing is the fresh veggies. Usually consisting of julienned carrots, onions, cilantro, bean sprouts and my favorite the spicy thinly sliced jalapeno. The choices are many at Ba Le with a heavy does on the pate, pork and chicken ones but also a lovely fried tofu vegetarian version. These subs are the perfect lunch on a hot summer day-the veggies make it a really fresh sandwich on a hot day. 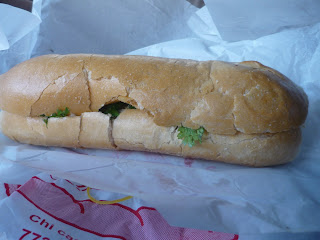 I don't have a go to sandwich from Ba Le because I'm still busy trying to taste them all and I have yet to find one that I cant stand. Some people cant take the pate and headcheese and various cuts of pork they don't normally consume but I'm not normal. I think I even remember not liking the first banh mi I ever ate and so I threw it out immediately after my first bite. Within two minutes I wanted to dig it out of the trash when I realized my stupid mistake. Now its one of my favorite sandwiches to enjoy during the summer months. Even better is they have nice pictures on the wall of every sandwich just in case your not sure whats in it looks like. 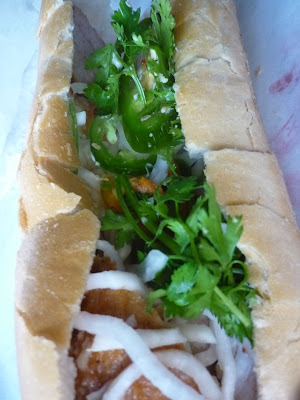 You should try Nhu Lan on lawrence and rockwell. In my opinion better than Ba Le. When I lived nearby I went there far too often.

Your right about that