Everyone knows about Chicago's legendary hot dog stands, pizza shacks, Italian Beef's, basketball god's and football coaches but not too many know about the fried shrimp shacks. Although the amount of shacks serving up fried shrimp and other fried seafood and chicken has gone down over the years there are a number that remain. There are two things that all the shrimp shacks around town have in common. They are almost always family owned and the ones that remain in business have been around for a while. Its a trend that was started by the Troha's when they opened up shop at the current location back in 1920 over on 26th st. The sign on the exterior read "A stein of beer and a bowl of chili for 5 cents" So how did they go from a chili parlor that served beer to fried shrimp shack? 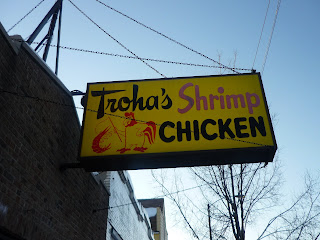 It was during the great depression when chili meat became scarce that Troha's had to resort to selling fresh and smoked fish instead. It was 15 years after first opening its doors in 1920 that Mr. Troha took a trip to New Orleans. It was on this trip that he and the family fell in love with fried shrimp and decided to scratch chili and beer from the menu and become Chicago's first fried shrimp shack. It started a trend that became big and soon after many others started popping up around town. Then during the 40's and 50's these smoked and fried seafood shacks thrived and continued to do so leading up to the 80's. However just like any other city experiencing growth and real estate boom many of the neighborhood shacks are no more and its becasue of this that the ones that remain all have a lengthy history. But none as old as Troha's. 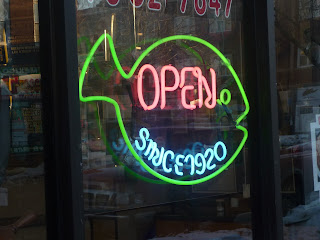 So you know its good 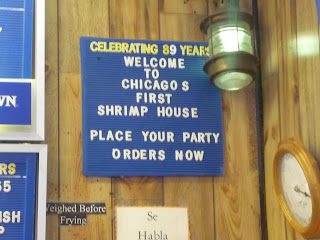 Troha's is strictly carry-out so its best to order ahead

You don't stay in business for 89 years and not perfect the art of golden deep frying. The menu at Troha's is pretty much a "if its good fried then we got it" type thing. Along with various forms of seafood that include shrimp, scallops, catfish, perch, whitefish, smelt you got stuff like fried chicken, frog legs and pork tenderloin. Just in case you need something that didn't come from a deep fryer they also have various salads such as crab, potato and macaroni along with cole-slaw available in different sizes. As the years passed by Troha's remained, and still does, the same. A few changed were made here and there like adding fried chicken to the menu circa 1959. The chicken is still fried to the exact same recipe as the original and the secret ingredient remains a mystery to this day. Some of the best fried chicken in Chicago can be found at Troha's. 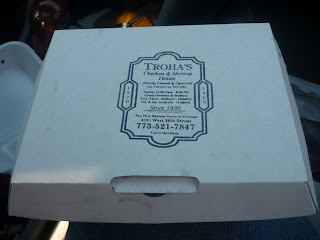 The Seal of Approval 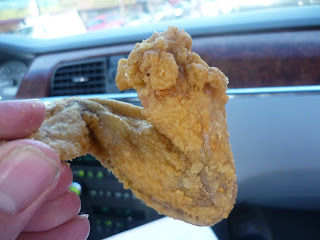 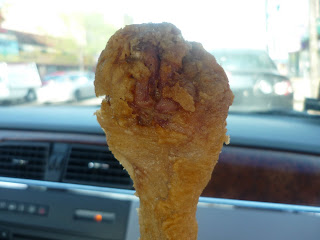 ...which the same can be said for the leg 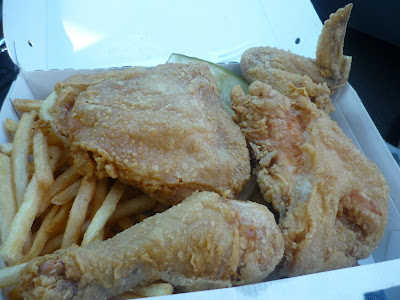 chix-dinner gets you a breast, thigh, leg, wing with fries, slaw and a pickle for under $10

Like everyplace else that becomes legendary over time you need a signature dish to gain popularity and help you stay afloat and that item is the shrimp. I don't know what the people of New Orleans told the founding father of Troha's about perfecting the art of fried shrimp but the told him everything he needed to know. The shrimp comes out perfectly fried to a golden exterior with just the right amount breading (very light) mixed with secret spices. The size is right and the price is too. With a dinner order you get about 8-10 scrimp with fries and slaw and its also available by the 1/4, 1/2 lb etc... They offer two dipping sauces for your fried seafood along with tarter sauce and I prefer the hot which is a mixture of cocktail sauce and hot sauce. This my friends is the best fried shrimp in Chicago. 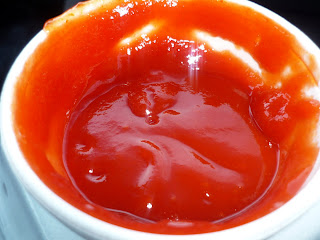 Hot Sauce for some dippin' 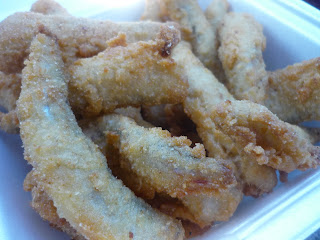 Smelt in season are always good for me 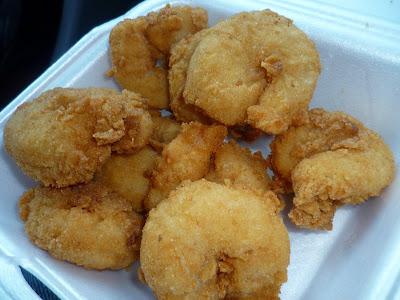 Despite a massive change to the neighborhood, nothing else has changed at Troha's. Unlike so many other family businesses it has been able to survive past the 2nd generation with no ruffles over ownership and is now run by 3rd and 4th generation family members. The neighborhood of Little Village has evolved into the largest community of Mexican people outside of Mexico and is a food destination in its own right. So when your sitting around bored one day this summer with nothing to do-take a ride down 26th St. You get to check out out one of Chicago's premiere food strips with a heavy emphasis on Mexican street eats and then get some Chicago style fried shrimp at one of the city's most historic food stops. Its a great 1-2 punch.

I am so jealous over the fried chicken and shrimp. I can hardly stand it.

Wow those shrimp look big! I love these mom and pop type fry houses. They give you quality food at a fair price. I used to loving going to this place called MJ's when I worked in Bensenville. They have the best coconut shrimp!

I grew up in this area; back when the little old ladies from the old country would wash the sidewalks with a scrub brush and a bucket of soapy water. My mom & Uncle went to this place when they were kids. I was weened on Troha's fish & shrimp and have never had better. Go in the daytime, don't go alone, and if the grand-kid's haven't run it into the ground, don't forget to grab some of the best coleslaw on the planet.

Eaten Troha's for as long as I can remember and it is still a real treat. I'll second that vote for best Cole Slaw too, nice and creamy.

Does anyone know what the ingredients they used in their coleslaw