Eating like a Mayan King in the Windy City

If you don't like legit Mexican churros than you might be bulimic and should talk to your doctor immediately. I'm sorry but there's no other reasonable explanation for not liking the Spanish doughnut unless you just don't like food. Although they originated in Spain churros have a huge presence in Latin America and specifically Mexico. They are made by piping dough from a churrera (a star shaped tube hence the name) and it is then fried until crispy on the outside and a little doughy inside and sprinkled with cinnamon sugar. Think of a tube shaped doughnut that's basically what they are. In some places they fill them with chocolate and jelly and other good stuff and they are usually enjoyed for breakfast dipped in hot chocolate. As someone who's not big at all on desserts or doughnuts, cakes and sweets in general this might be my favorite fried pastry on the face of the earth and I could easily eat them all day and be a happy man. 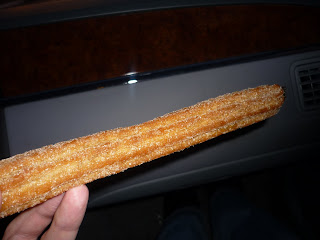 a Mexican churro from Chicago

Although Wikipedia states the following they're dead wrong "Until recently, churros could be difficult to find in the United States and other non-Latin countries outside of Latin American street stands and eating establishments. However, with the increased popularity of Latin American food, today there are a growing number of franchise restaurants that sell fresh churros, both traditional and filled." Whoever wrote that must be from Bayfield, Wisconsin because here in Chicago churros are as available as doughnuts in many of our neighborhoods. You can find them in the suburb of Highwood all the way up to the concessions stands at the White Sox home of U.S Cellular Field and everywhere in between. Its impossible to to try all of them because so many of these churros are sold by vendors who set up at different spots on different days in parks and outside grocery stores offering them as a snack anytime of the day. Not to mention the panaderias and the same grocery stores the vendors are outside of offering them as well. Churros are so special that the people who create the magical ones even have their own name, churreros are the ones who make the divine churro. The Picasso's of the fried dough movement. Every Mexican town and heavily populated Hispanic area in the states has a Don Churrero. 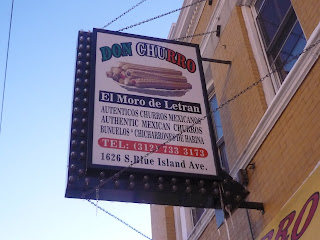 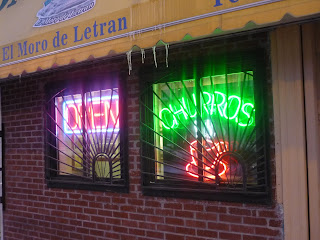 Churros are enjoyed with hot chocolate/coffee

Here in Chicago we have a few places that have storefronts that specialize in just churros and that's it. Don Churros aka El Moro de Letran is located in Pilsen on Blue Island just off 18th St. Its a small storefront with a counter, no seats and on that counter is a display case of churros and sopapillas along with coffee and hot chocolate and that's it. Behind the counter is a group of ladies who are watching TV and pumping out amazing churros from open to close. I'll eat a churro 24/7/365 but for some reason I really enjoy them in the winter. They are made fresh several times a day at Don Churros and served hot and crispy just the way they should be and are offered with filling which is typically a Mexican practice. You tell the lady behind the counter what flavors you want and she uses a piece of wax paper to grab it and cover it in sugar. There's nothing like eating a hot churro with the warm chocolate or jelly in the middle on a cold winter day. They offer the churros plain and with strawberry jelly, real chocolate, Bavarian creme and just recently started selling caramel ones too. 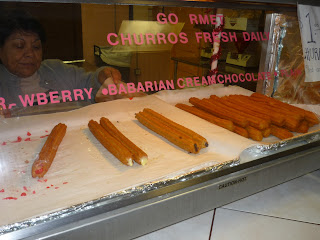 At a buck a piece the prices have gone up and are more than street vendors but still way cheaper than the sporting venues. I have no problem paying $1 per and that includes tax. If you get 10 churros then its $10. If you asked me whats the best dollar you could spend on food, that's it one buck and not any change I would answer with a piping hot strawberry churro from my ladies at Don Churros. When you see a food spot that specializes in one specific food item than odds are its going to be real good. How can you have one thing on the menu and have it not be one of the best in its category? 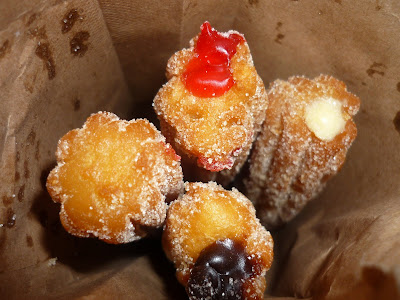 So bad, but sooooo goooood!

I haven't had any filled ones. The strawberry one would be my favorite.

Thanks for adding us as a friend on Foodbuzz. We welcome you to come visit our site!

My Name is Sharon. I think your web site gives great news on current retail market. As i am also into food research. Its a good site with lots of information. Keep the good work on.

I will definatly bookmark your web site for my research work. You may also kindly visit my web site blog related to food and drinks industry that is http://foodmarketnews.blogspot.com and i would appreciate if you could kindly have a look at my blog too. Its updated on a daily basis