-Got Beef?
The Burgers of Chi (land)

Today's stop is a story about the little guy (David) showing the Big Guy (Goliath) how it's done. It takes place in the sleepy suburb of Park Ridge which has one of those historic small town feels to it. I've always liked Park Ridge in terms of it's cool old buildings (like the movie theatre) and such but the food scene over there has always been pretty plain. I cant remember the last time I had a spot to check out in the area but The Sandlot shot onto my list when it started making the rounds on social media. Nick K. over at the Trib did a Suburban burger search and The Sandlot was just about the only spot I hadn't been that caught my eye. So I've wanted to try them for a while now and did so recently. 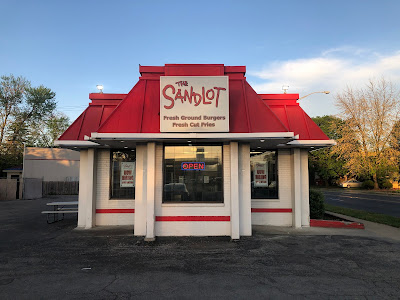 Locals Favorite in Park Ridge
The Sandlot sits in an old KFC location and judging by the flow of customers on my visit they're doing better than the Colonel did over here. Score one for the little guys. The menu is super simple at this burger joint named after the popular movie. They do West Coast style cheeseburgers, fresh cut fries, hot dogs, and a chicken sandwich. The burgers are freshly ground and served in the In-N-Out style that's become popular throughout the country. Two beef patties are cooked on a hot flattop and dressed with lettuce, tomato, special sauce and your choice of grilled or raw onions. I tried their signature double which they call a 2-N-2 and chose the grilled onions with a side of fries to go with it. The total was less than $10 and both the burger and fries were super satisfying. I wasn't a huge fan of the bun (I prefer a softer variety) but it wasn't a major distraction either. A better product than every franchised QSR within 100's of miles of any direction. You can tell they're focused on the food first and foremost bc there's like two Sandlot movie posters hanging on the walls inside and that's it. 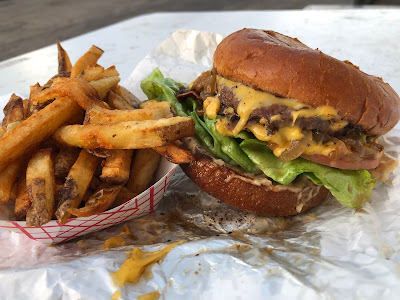 Double Cheeseburger and Fries at The Sandlot