Around the beginning of 2021 the city got a bunch of new Thai restaurants. There were a handful listed among the openings in various online lists. EaThai replaced a Mexican restaurant at the corner of Kedzie and George right around the start of the year. While you never want to see a family owned spot close it's nice to see another one open. EaThai is the product of a longtime Chicago chef who has branched out on his own cooking the traditional food is mother made him growing up in Thailand. 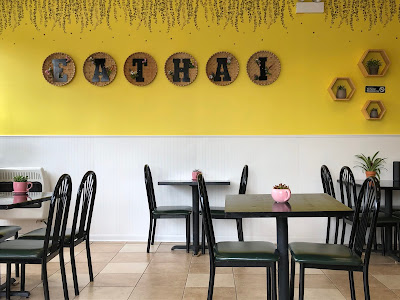 Newly Opened in Avondale
EatThai made themselves known right away with an online presence on Facebook and Instagram. If you go over to Yelp it's been warmly welcomed to the Avondale neighborhood for the most part. I decided to try it one winter night when I didn't really know what I wanted but knew I was hungry for some sort of noodle soup. So I tried their Guay Teow Neua which is a Thai style beef noodle soup. It was exactly what I wanted without even knowing it. Nice tender chunks of stewed beef and a slightly sweet broth with green onions and stuff added for a little crunch. After that EaThai became a spot I go when I really dont have a taste for anything in particular and also for when I want some sort of Asian food that's not too far. Lots of online love for their wings and I completely agree. This was the best fry job on some fried chicken that I've had in some time. They had a super crunchy exterior with an extra juicy interior. They burst liquid like a soup dumpling. Served with a sweet & sour dipping sauce. 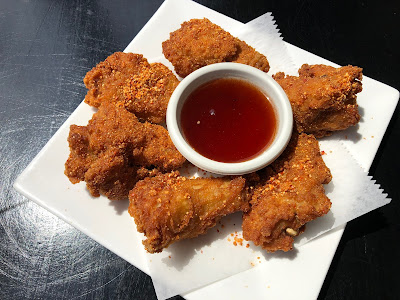 Chicken Wings at Eathai
The menu at EatThai is smaller than many other Thai restaurants but this isnt a bad thing by me. There's still a wide variety of options including sections of apps, curries, noodles, and rice. I tried the veggie Pad Thai with my wife one night and it was better than I remember many a pad thai around town to be. I was never a huge Pad Thai fan anyway. EatThai has a rotating list of specials and some have been pretty interesting over the last five months or so. An Issan platter with fried chicken, som tum, chicken skins, soup, and sticky rice was very good and something I wish was on the menu regularly. I joined my parents and two young nieces there last week and got myself the Pad Woon Sen with shrimp which is currently on special through May. This homestyle Thai dish is stir fried vermicelli noodles tossed with a housemade signature brown sauce and mixed with cabbage, carrots, green onion, bean sprouts, egg. This one somewhat reminded me of another popular Thai dish that I loved in Bangkok (stir fried sukiyaki). While it wasn't quite the same it brought back memories of something I enjoyed so that was enough to really like this dish. A very solid neighborhood spot. 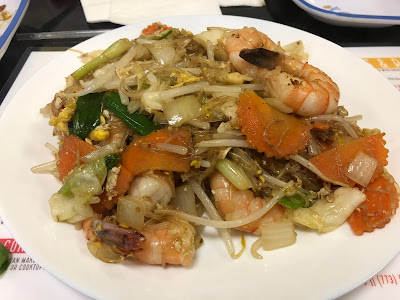 First time reading this thanks for sharing