While working on a recent project for Chicago Magazine (stay tuned) I had the daily urge for a Chicago dog (a clue). Let’s just say they were on my mind quite regularly and when that’s the case I tend to go on binges. Not just that but I’m in a FB group revolving around Chicago food and hot dogs from around town are commonly posted. One of the recent postings over there that caught my eye was Fast Track located in the West Loop. A spot I probably hadn’t visited in more than a decade. Locals Favorite in West Loop
Fast Track is a classic Chicago hot dog stand. They got Hall of Fame recognition from Vienna Beef in 2015 which at the time was close to a quarter century that they'd been in business. So they must be coming up on 30 years open. The menu here is a what's what of Chicago style fast food including fried shrimp from Lawrence's down on S. Canal. All that said I was returning for a char dog which was what I saw in the social media picture that got me in. It's a natural casing Vienna Beef wiener and the option to have it steamed is also available. It's a pretty picture perfect example and it tasted like one too. Fries don't come with the hot dogs ($3.99) here but they make a thinner fresh cut variety that get nice and crisp. Plus you have the option to add Merkt's cheddar spread. The atmosphere is top notch too, as are the decorations inside and outside. Glad I returned and could document them on here. 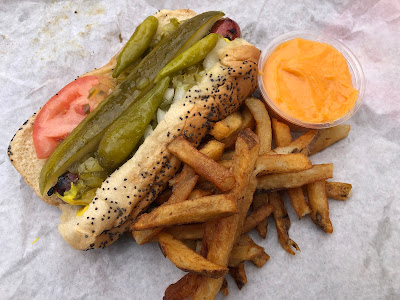